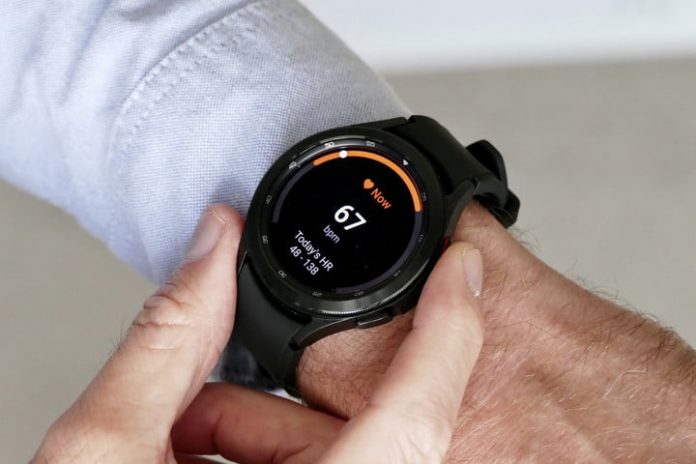 The Apple Watch Series 7 is the latest iteration in Apple’s pursuit of smartwatch perfection. Contrary to rumors, it retains its elegant “squircle” design and marries it to a range of welcome upgrades. These include a Retina screen that’s 20% larger than the display on the Apple Watch Series 6, 33% faster charging, a more durable glass for its touchscreen, and a 70% brighter always-on screen. On top of this, it includes all of the great health-tracking features of its predecessors, a highly capable processor, and some very slick software.

Apple aficionados would probably tell you it’s the best smartwatch by anyone anywhere. However, others may suggest that Samsung Galaxy Watch 4 Classic gives it a very good run for its money. In contrast to Apple’s flagship wearable, it sports a more traditional design that eschews a squarish shape for a full circle. That said, it still offers a wide range of modern smartwatch features, including comprehensive fitness tracking and a rotating bezel that makes it a joy to use. It is possibly the best smartwatch Samsung has ever made, but how does it fare against the Apple Watch Series 7?

We answer this question by comparing each smartwatch against each other in a head-to-head test.

Rumors had suggested a design overhaul for the Apple Watch Series 7, but it turns out it looks nigh-on identical to the Apple Watch Series 6. Nonetheless, there are a couple of subtle, yet tangible improvements: The watch’s bezel has been decreased in size by about 40%, meaning that you get 20% more display for your buck compared to the Series 6, as well as 50% more in comparison to the Series 3. This not only makes the watch look a little more impressive, but it also makes it more functional, with the extra real estate allowing for more text and icons to fit inside its display.

As mentioned above, the Samsung Watch 4 Classic apes the more understated design of a traditional watch, as well as that of the Samsung Watch 3. However, it also incorporates narrower bezels than its immediate predecessor, while it refines its strap and buttons compared to the Watch 3, making them fit the watch itself more seamlessly.

The question of which watch is more attractive is highly subjective and debatable, but the same usually can’t be said when it comes to displays. However, both watches are more or less equally matched. The Watch 4 Classic packs a Super AMOLED display, which provides 330 pixels per inch, regardless of whether you go for the 42mm and 46mm model. By contrast, the Watch Series 7 harnesses an LTPO OLED Retina display, which gives you 345 pixels per inch with the 41mm model and 353 PPI for the 45mm version. This slight superiority in terms of pixel count is counteracted by Samsung’s AMOLED display technology, which allows for slightly deeper blacks and richer colors than the Watch Series 7’s OLED tech. As such, you get a great visual experience across both devices.

Both watches present various options when it comes to bands and colors. The Watch 4 Classic comes with casing in either black or silver, while bands come in everything from red to mustard and camel. Likewise, you can get the Apple Watch Series 7 in either aluminum, steel, or titanium casing, while its loops range from sports bands to more luxury nylon and leather variants, for example.

As for durability, it’s worth noting that the Watch 4 Classic carries an IP68 rating, indicating both water and dust resistance. Unfortunately for the Apple Watch, it offers only dust resistance (IP6X), so don’t go dunking it in the bath. On the other hand, its use of sapphire crystal glass should make its display highly scratch and drop-resistant.

Not only does the Apple Watch Series 7 look very similar to the Series 6, but it also runs on the same Apple S6 chipset. This is a highly capable processor, so it will still get all of your watch-related tasks done without any hassle, but just don’t expect a noticeable performance boost. With the Samsung Galaxy Watch 4 Classic, you’ll be running off the new dual-core, 1.18GHz Samsung Exynos W920 processor with 1.5GB of RAM. Our review found that it effortlessly handles its tasks, and even though we haven’t given the Apple Watch a full review yet, we expect that Samsung’s wearable will at least match it for speed, if not perform better.

In terms of charging, Samsung claims you’ll get up to 40 hours of playtime before the Watch 4 Classic requires a recharge. This turns out to be the case in reality only if you use the watch sparingly. If you use its always-on display, use it for tracking your sleep, and just use it frequently in general, it will struggle to complete two whole days before needing a refill. This puts it on a par with the Apple Watch Series 6, which judging by the Apple Watch Series 6, will also struggle to finish a second day if you make use of its full potential. However, Apple has claimed it provides 33% faster charging than its predecessor.

The Apple Watch Series 7 comes with the same sensor array as last year’s model, meaning you get a heart rate sensor, blood oxygen monitor, and an electrocardiogram (ECG), all of which offer general indicators of the state of your health but shouldn’t be regarded as genuine substitutes for qualified medical examinations. Thanks to WatchOS 8, Series 7 also adds an automatic fall-detection feature that runs in the background during workouts and when cycling, sending messages to emergency contacts if you do happen to have an accident. Also due to WatchOS 8, it can now also measure your respiratory rate while sleeping.

Beyond these additions, the fitness- and health-tracking features work as well as ever, providing accurate and reliable data via the simple interfaces of the Health app. The same pretty much goes for the Galaxy Watch 4 Classic, which in contrast to the Apple Watch Series 7, introduces a number of features not previously seen in its line. These include an optical heart rate sensor (8PD), an electrical heart sensor (ECG), and biological impedance analysis (BIA). Together, they enable you to track such things as your sleep, your blood-oxygen level, your blood pressure, and also your body composition (i.e., your body mass index). The watch also supports over 100 different workouts, meaning Samsung’s device is every bit as comprehensive as a fitness tracker as Apple’s.

In other words, this round is another tie.

As mentioned above, the Apple Watch Series 7 operates using WatchOS 8. This brings a variety of workout updates to the table, including the ability to detect when someone begins riding a bike, and also workouts for tai chi and pilates. It also transforms the Breathe app into the Mindfulness app, which adds new sessions and activities to those previously available via Breathe. All in all, it provides a very smooth user experience.

The same can’t always be said from WearOS 3, which the Samsung Galaxy Watch 4 Classic uses. It’s generally fast and easy to use, with a range of Google apps that improve the device’s versatility. However, these and other third-party apps don’t always work as well on the watch as they probably should, as our review found that certain apps don’t always run seamlessly, while others you might expect to find aren’t available via GooglePlay.

When combined with the fact that you’ll be better serviced with updates by the Apple Watch Series 7, this difference in overall UX means we have our first round with a clear winner.

The Apple Watch Series 7’s special feature is its enlarged display, which allows for some enhanced functionality. For example, the watch now lets you use a full on-screen QWERTY keyboard to type messages or commands, with the keyboard also supporting QuickPath (i.e. swipe typing). Another example is that numerous apps (e.g. Calculator, Stopwatch, and Timer) feature redesigned buttons and icons that make using them easier. At the same time, Apple has added a couple of new watch faces that make the most of the bigger, curved screen, such as constantly changing Contour (which highlights the hour of the day, making it bigger than the other hours).

With the Galaxy Watch 4 Classic, you continue to get the rotating bezel that has made previous Galaxy smartwatches such a pleasure to use. It may be a simple feature, but it’s an effective and satisfying way of navigating the device’s interface, letting you scroll through options simply by rotating its edge. Of course, as good as it is, it isn’t a new feature, so we’re calling this round a tie.

The Apple Watch Series 7 is available to order from Apple from October 15 onwards. It starts at $399, but can reach as high as $899 if you go for the larger 45mm model with titanium casing, for instance. You’ll also be able to find it from the vast majority of big online retailers.

The Samsung Galaxy Watch 4 Classic begins from $349 for the 42mm model and can go up to $429 if you want the larger 46mm model with a cellular connection. It’s also widely available online.

There’s very little difference between the Apple Watch Series 7 and Samsung Galaxy Watch 4 Classic in terms of overall, with both watches providing great performance and enviable looks. However, we’ve given this head-to-head to the Series 7 simply by virtue of its superiority in the software department, both in terms of how smoothly its OS runs and in terms of how well it will be supported by updates. Otherwise, the Galaxy Watch 4 Classic provides comparably good health-and-fitness tracking features, a similarly sharp display, and good battery life. It’s your only choice out of these two if you’re an Android person, of course, but if you’re using an iPhone, then the Apple Watch just about edges it.