Xiaomi unveils smart glasses that it claims could replace the smartphone 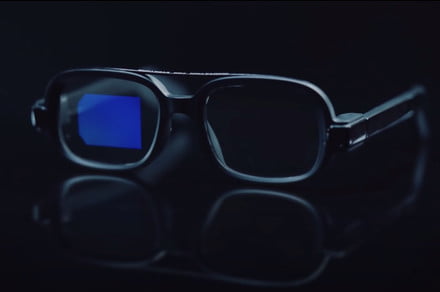 Xiaomi has unveiled a pair of smart glasses that it claims could replace the smartphone. But don’t trash your handset just yet as a release is likely to be some time away.

The Chinese tech giant unveiled the high-tech specs in a slick video (below) released on Monday, September 13.

Now, if you’re already squinting at the mere thought of trying to read messages or browse photos on a display described by Xiaomi as “smaller than a grain of rice,” rest assured, the glasses’ specially designed technology works to create a much larger display right in front of your eyes. The drawback, however, is that the device’s “complicated optical structures” mean that it only offers a monochrome display (so for most folks, probably not quite a smartphone replacement).

As for looks, Xiaomi’s new device at first glance seems pretty similar to a regular pair of glasses. The 5-megapixel camera, for example, is neatly hidden at the end of an arm, while its main technology — among it a quad-core ARM processor, battery, touchpad, and Wi-Fi/Bluetooth modules — is concealed in and around the rest of the device.

Xiaomi’s smart glasses certainly seem packed with features and offer a design that many would be happy to perch on their nose, but the apparent absence of even a working prototype means it’s hard to get excited about them at this stage.

With the product not yet ready, it’s almost as if Xiaomi’s announcement is an effort to generate extra publicity for its tech event this week when it’s expected to unveil a slew of new phones and other products — indeed, the fact that it’s taking place at about the same time as another event put on by a rather more prominent tech company means Xiaomi may have to fight hard for coverage in the coming days.

After Google’s failed effort with Glass, a growing number of companies — Huawei, Amazon, and Facebook among them — have been tentatively stepping into the smart glasses space with their own take on the futuristic product. But most of the current crop of high-tech specs either have limited functionality or need to be tethered to another device, which is an interesting proposition if you want to wear them on the move.

Xiaomi clearly envisions a more advanced product, so hopefully it can offer up additional information at this week’s event, including price and availability. We’ll keep you posted.

Xiaomi unveils smart glasses that it claims could replace the smartphone