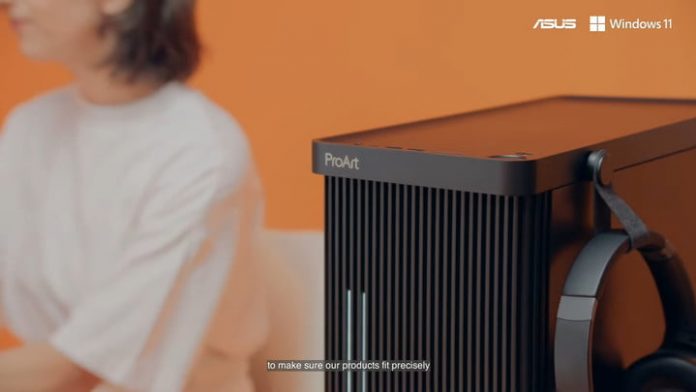 Asus announced a slew of new products at its Create the Uncreated event on Thursday, including an upgradable desktop and a new AMD motherboard. Part of Asus’ ProArt range, both are designed with creatives in mind and both offer stability for powerful processors and certification for creative applications.

The ProArt Station PD5 is a new prebuilt desktop that’s upgradable. So far, the ProArt range has mostly focused on laptops. It uses a full-size ATX case and offers up to an Intel Core i9-11900K paired with either an Nvidia RTX 3070 or RTX A2000, as well as up to 128GB of DDR4-3200 memory. Outside of some solid horsepower, the PD5 comes with a few key quality-of-life improvements.

It includes a handle, so you can move it between workstations, as well as a two-stage power switch that you can lock to prevent accidents. Most interestingly, there are a pair of LED strips on the front of the case that show your CPU and GPU utilization, allowing you to check in on long renders without sitting down at your PC.

Asus says the PD5 is upgradable, including support for RAM, GPU, and CPU swaps. It also includes a bay of tool-frees hard drive slots so you can quickly upgrade your storage. The PD5 will be available later this year, but Asus hasn’t announced pricing yet.

If you’re more of a PC builder, you can use ProArt X570 Creator Wi-Fi motherboard. Supporting AMD’s latest chipset, the board is designed to handle up to the AMD Ryzen 9 5950X. It comes with a 14+2 VRM power design, offering plenty of power for beefy CPUs like the 5950X and headroom for overclocking.

Two passive heat sinks, one for the VRM and another for the PCH, keep everything cool. To make sure the board can hold up, Asus subjects it to a 168-hour stress test in a warm setting before sending it out.

The board features dual Thunderbolt 4 ports, eight USB 3 ports, and dual networking ports. You can run either 10Gbit or 2.5Gbit Ethernet to the board, or you can use it wirelessly with Wi-Fi 6E support on board. On the storage front, the board feature three PCIe 4.0 M.2 slots.

Asus hasn’t announced pricing or availability for the board yet, though we expect it to arrive later this year.