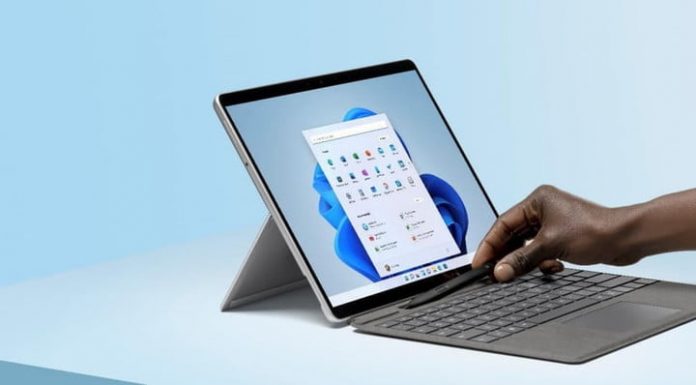 Microsoft recently announced the Surface Pro 8, so you might be wondering how it compares to the latest and greatest iPad Pro from Apple. Both devices can be used as tablets, or as computing devices with a keyboard. The screens are also similar, with narrow bezels.

Even so, there are a lot of huge differences between the two., including the Surface Pro’s kickstand, the Windows and iPad OS operating systems, and more. We’re here to help you see what makes these two devices unique.

In terms of design, the iPad Pro and the Surface Pro 8 are on even footing, but with some exceptions. Both devices have a large and immersive display and are made out of aluminum. On the iPad, you’re getting a 12.9-inch screen, and on the Surface Pro 8, a 13-inch screen.

An important note is that Microsoft finally cut the bezels down on its screens this year, making the display on the Pro 8 bigger. Microsoft says it slimmed down the bezels on all sides of the device, allowing it to fit in a display that’s 11% larger than the one on the Surface Pro 7. The screen is also 12.5% brighter than it’s predecessor’s. This brings it closer to the iPad Pro.

On paper, the iPad Pro has slightly more vertical pixels. Its resolution comes in at 2732 x 2048, or about 264 pixels per inch (PPI). The Surface Pro 8 comes in at 2880 x 1920 and 267 PPI. The difference will not really be noticeable for most people, but the Pro 8 has a slightly higher pixel density than the iPad. Note that the iPad also gets up to 600 nits of brightness, but the Surface only 500. The Pro 8 screen is brighter.

Also of note are the refresh rates. The Surface Pro 8 has a new 120Hz refresh rate display. The iPad Pro, meanwhile, has the “ProMotion” screen. It’s the same technology, where screen movements are smoother, but Apple just has a different name for it. This benefits web browsing, as well as inking.

The Surface Pro 8, however, has the added benefits of haptics when inking with the Surface Slim Pen 2. This makes your inking a lot more natural since you’re able to feel the vibrations of the Surface Slim Pen in your hands as you slide it across the screen. You won’t find this on an iPad with the Apple Pencil.

We also can’t forget the kickstand. This is included right on the back of the Surface Pro 8, letting you prop the device in your lap and making it easier to use on a flat Surface. The iPad Pro doesn’t have a kickstand, so you’ll need to invest in Apple’s new Magic Keyboard for that experience. The keyboard floats the iPad, giving you a more PC-like feel. Keycaps on this keyboard are the same as the ones on Apple’s Macbooks. It’s an additional $300, just like how the Surface Type Cover is an additional purchase.

Microsoft also tweaked its Type Cover accessories this year, giving you room to put away the Surface Slim Pen 2 and recharge it. This is different from the iPad Pro, where you house the pen at the top of the screen.

Under the hood of the iPad Pro, you’ll find Apple’s Custom M1 processor. On the Surface Pro 8, you’ll find Intel’s latest 11th-generation Tiger Lake processors. Apple’s CPU is based on the ARM architecture, but Microsoft’s isn’t.

If you want a Microsoft device with an ARM chip, you have to buy the Surface Pro X. We talked about those technical differences and dove deeper into the speeds of the M1 chip in our iPad Pro versus Surface Pro X comparison.

Thanks to Apple’s M1 chip, iPads should feel snappy and fast. But don’t let that fool you — you’ll still be dealing with mobile apps. Many iPad apps are not yet optimized for the power of the M1 processor, and Apple hasn’t ported Mac apps to the iPad. So the M1 iPad Pro is very overpowered for what it is.

We’ll remind you that Surface Pro 8 devices have Intel quad-core processors, which means that they’re pretty much a full-blown computer thanks to Windows 11.

If you choose the entry-level Surface Pro 8 with an Intel Core i5-1135G7 processor, you’ll still be able to enjoy light gaming, as well as some photo and video editing. Intel has made advancements with Iris Plus graphics, and the Core i7 only boosts that performance more. You can run full desktop apps like Photoshop on the Surface Pro 8 without issue, and without worrying about the mobile-first optimizations you see on the iPad Pro.

Now let us talk about ports. The iPad Pro has a single Thunderbolt 4 USB 4 port. It’s the only port on the device, which means the Surface Pro 8 will trump it here. The Pro 8 comes with two USB-C Thunderbolt 4 ports, a 3.5mm headphone jack, and a Surface Connect port. Thunderbolt 4 is new on the Surface this year, and provides access to faster data transfers, external GPUs, and dual-monitor support. You get more ports on the Surface than on the iPad, but you’ll need a dongle for both devices.

When it comes to cameras, both devices have 1080p front webcams,but the iPad’s is able to do panning and zooming to make sure you’re in the frame. This feature is known as “center stage” — the Surface does not have the technology. On the iPads, the camera can be used for Face ID logins, and on the Surface, the camera is used with Windows Hello for the same thing.

We’ll end by talking about battery life. We didn’t yet test the Surface Pro 8, but Microsoft promises up to 16 hours of general usage. On the iPad Pro, we got to around 10 hours of web surfing. While the iPad is currently behind in battery life, but Microsoft’s claims have yet to be tested in our labs.

The jury is out

Until we thoroughly test the Surface Pro 8 ourselves, we can’t offer a definitive recommendation between these two.

For the first time in a while, however, the comparison feels close. The iPad Pro continues to improve as a laptop replacement, and the Surface Pro 8 is finally starting to feel like a proper tablet. However, Android apps are still waiting in the wings for a future update of Windows 11, leaving a a bit of an app gap for mobile use.

The iPad Pro has that same problem on the pro side of things. While apps like ProCreate continue to be a dominating force in the world of design and illustration, the Surface Pro 8’s versatility as a true Windows laptop replacement remains attractive.

The iPad Pro is the only option you can buy right now. Once we thoroughly test the Surface Pro 8, however, we’ll update this post with a more conclusive recommendation.