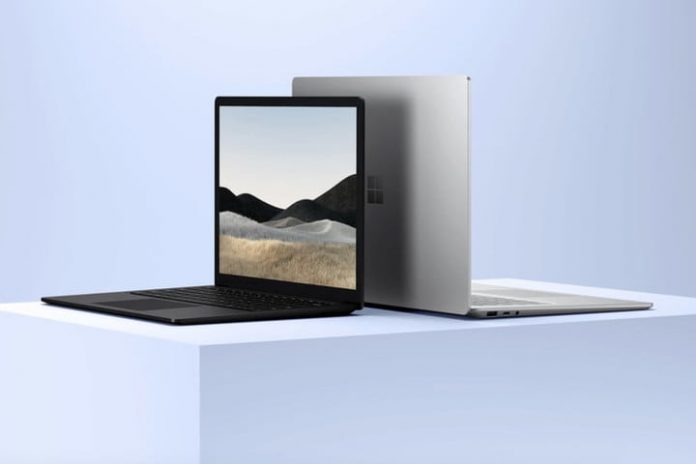 There’s a decent gap between these two machines, both in price and specs. On their face, however, they look similar. We’re here to break down all the differences between the Surface Laptop Studio and Surface Laptop 4 so you know which one to pick up.

The new Surface Laptop Studio starts at $1,600. Microsoft hasn’t announced pricing for the top-end version. The base model comes with a Core i5 processor, 8GB of RAM, and 256GB SSD. If you want the dedicated RTX 3050 Ti graphics card or a Core i7 processor, you can expect to pay significantly more.

The difference is pricing makes sense given the disparity in power. Both machines use Intel’s 11th-gen mobile processors, but the Surface Laptop Studio uses the more powerful H35 chips, which can run at up to 35 watts. It also comes with an option for a dedicated graphics card, which the Surface Laptop 4 lacks.

The difference in design between the Surface Laptop 4 and Surface Laptop Studio is in the name. Both are traditional laptops, so they don’t have detachable keyboards like the Surface Pro 8. The Studio model borrows from Microsoft’s all-in-one Surface Studio and features a hinge on the screen that allows you to swivel it down.

The swivel screen works in three modes. The first is like a traditional laptop with the screen pushed back. From there, you can pull out the bottom of the screen to cover the keyboard, which Microsoft calls “Stage Mode,” or you can lay it flat on the key bed for “Studio Mode.”

Port selection is better on the Surface Laptop Studio, even if both machines are light on ports. It features two USB 4.0 ports capable of Thunderbolt 4, as well as a 3.5mm headphone jack. The Surface Laptop 4 comes with two USB ports as well, split across a USB-A and a USB-C connection supporting USB 3.2.

In terms of looks, the slightly older Surface Laptop 4 actually wins. In addition to four color options, Microsoft offers the Surface Laptop 4 with either a metal or woven alcantara tray. The Surface Laptop Studio looks to adopt a more straightforward design with silver aluminum around all points on the body. We don’t know yet if it will be available in other colors.

The Surface Laptop Studio wins the design section, however, simply on the strength of its swiveling screen. It also comes with built-in charging for the new Surface Slim Pen 2, which is something the Surface Laptop 4 lacks.

Despite a difference in size, the Surface Laptop 4 and Surface Laptop Studio have similar screens with a few key differences. They both use a 3:2 aspect ratio and come with a pixel density of 201 pixels per-inch (PPI). Resolution doesn’t really matter — each of the screens hit the density at their given size — but they all fall around the 2,560 x 1,440 mark.

It’s important to note that 14-inch laptops are becoming increasingly popular — just look at the Razer Blade 14 — offering a balance between screen size and portability. It comes down to preference, but if you like a 15-inch display without the bulk, the Surface Laptop Studio looks like a solid compromise.

At its higher price, it shouldn’t come as a surprise that the Surface Laptop Studio packs more powerful hardware than the Surface Laptop 4. It comes with Intel’s 11th-gen H35 chips, paired with either an RTX 3050 Ti discrete graphics card or integrated graphics, as well as up to 32GB of RAM.

The Surface Laptop 4 uses the standard range of 11th-gen processors that aren’t as power-hungry. The bump in wattage makes a big difference. Although both machines sport quad-core processors, the H35 chip can run multi-core tasks as much as 33% faster (at least based on the one in the Acer Predator Triton 300 SE).

You’re getting a powerful Intel chip either way — the 11th-gen chip in the Dell XPS 13 shows that. However, the H35 chip is designed to deliver better performance in apps that stress the processor, namely creative apps.

There’s a wrench in these cogs, though. Microsoft offers the Surface Laptop 4 with AMD Ryzen 4000 processors as well, while the Surface Laptop Studio is limited to Intel. The 15-inch model squeezes in an eight-core Ryzen 7 processor, and those extra cores make a big difference based on our testing.

The main problem is the context for the Ryzen chips. The Surface Laptop 4 doesn’t offer a discrete graphics option. That makes it a tough sell for creative apps like Adobe Premiere, which would otherwise benefit from the extra cores offered by the Surface Laptop 4.

Although the Surface Laptop 4 offers a more powerful processor, it throws all of the performance eggs into a single basket. The discrete graphics option on the Surface Laptop Studio rounds out the specs, making it more suitable for creative apps, as well as gaming.

With three screen sizes spanning our two competitors, it’s tough to make direct portability comparisons. Naturally, the 13.5-inch Surface Laptop 4 is the smallest and lightest of the of the three models. Beyond that, however, things get interesting.

The Surface Laptop 4 is lighter no matter how you configure things. Sometimes that disparity is less than half a pound, but it could be more than a pound.

If portability is your main concern, the 13.5-inch Surface Laptop 4 is the smallest and lightest option out of the lot. The Surface Laptop Studio isn’t much bigger, however, and it comes with longer battery life. Just be prepared to deal with a little extra weight.