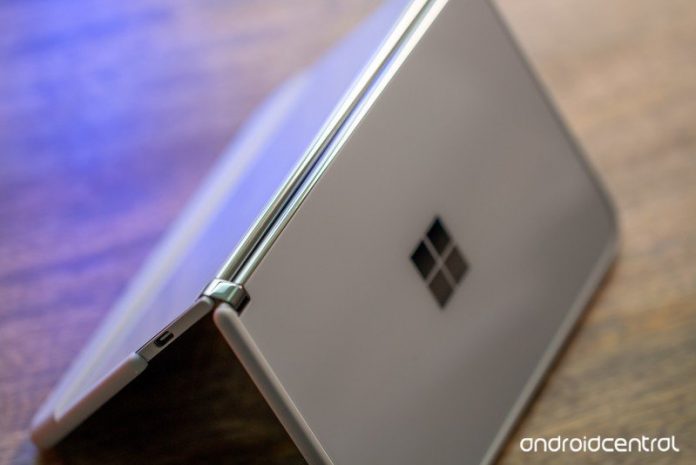 The listing reveals connectivity and charging features that were not available on the original Surface Duo.

Microsoft is planning an event on September 22 to unveil the upcoming Surface Duo 2 and other Surface devices. Ahead of the unveiling, the dual-screen device has made a pit stop at the Federal Communications Commission, with a slew of information pointing to a promising upgrade over its predecessor.

The FCC filing reveals a few connectivity improvements for the device including support for 5G networks, Wi-Fi 6 standard, NFC, and Ultra-wideband capabilities, as spotted by Windows Central. The original Surface Duo lacked these features.

While most of these details confirm previous rumors about the device, one curious revelation from the filing is a type of wireless charging called “Wireless Power Transfer.” Windows Central’s Daniel Rubino speculated that this could be a different type of wireless charging than the Qi standard, pointing out that the device appears to be too thin to accommodate the Qi charging coil. Because of the limited space, it will be difficult to mitigate the heat generated.

One possible application for that type of wireless charging is to juice up an accessory such as a Surface Pen through inductive charging. However, there’s currently little information about the capabilities of Micosoft’s stylus for mobile. On the other hand, Apple’s iPads use inductive charging to charge the Apple Pencil when it’s magnetically attached to the tablet.

In terms of design, the Surface Duo 2 is unlikely to look significantly different from its predecessor. Under the hood, however, the device could give some of the best Android phones a run for their money, including Samsung’s Galaxy Z Fold 3. Microsoft’s upcoming device is expected to be powered by Qualcomm’s Snapdragon 888 processor paired with 8GB of RAM and up to 256GB of internal storage.

On its back, the device could have three cameras comprising a 12MP wide-angle shooter, 16MP ultra-wide camera, and a 12MP telephoto lens. The Surface Duo 2 might also sport 5.8-inch displays with curved edges and pack a 4,400mAh battery.

It will most likely run Android 11, with an upgrade to Android 12 scheduled for the first half of 2022. There are no clear indications as to how Microsoft will price its upcoming Galaxy Z Fold 3 challenger, but these details will be announced later this week.