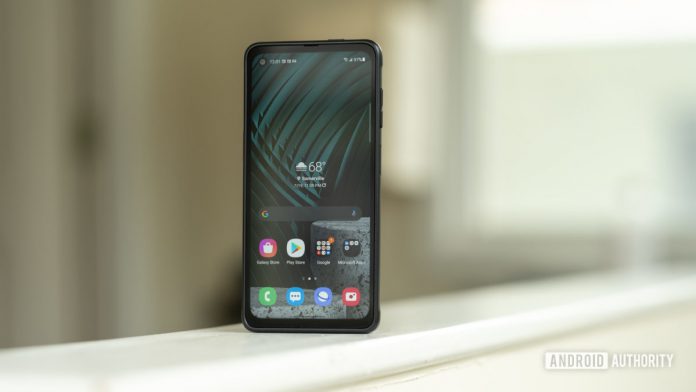 Rugged phones typically showcase a more durable and confidence-instilling design. However, the Samsung XCover Pro brings a different approach to the rugged market. Its square design and muted colors ensure that the phone is sleeker. But is it durable enough to stand up to the competition? Find out in Android Authority’s Samsung Galaxy XCover Pro review.

What you need to know about the Samsung Galaxy XCover Pro

In the rugged device market, the Samsung Galaxy XCover Pro sits right in the middle of the pack. Priced at $499, the XCover Pro ships in one color (black) and one option — 4GB of RAM with 64GB of storage, expandable to 512GB via microSD card. The unit I tested shipped with Android 10, and about six incremental updates later, I was able to update the phone to Android 11/One UI 3.

The XCover Pro is powered by Samsung’s Exynos 9611 processor and an average-sized 4,050mAh battery. However, the big sell here is that the battery is removable, so you can swap out replacement batteries at will to extend its use. The phone also comes with a Full HD 6.3-inch display protected by Gorilla Glass 5. On the bottom, there is an uncovered USB-C port and a single firing speaker. The top sees an additional programable button as well as a 3.5mm headphone jack, and the left side sees another smart key button. The right side houses the volume rocker and power/fingerprint sensor button.

In the box, you get a USB-C charger and some 3.5mm headphones. 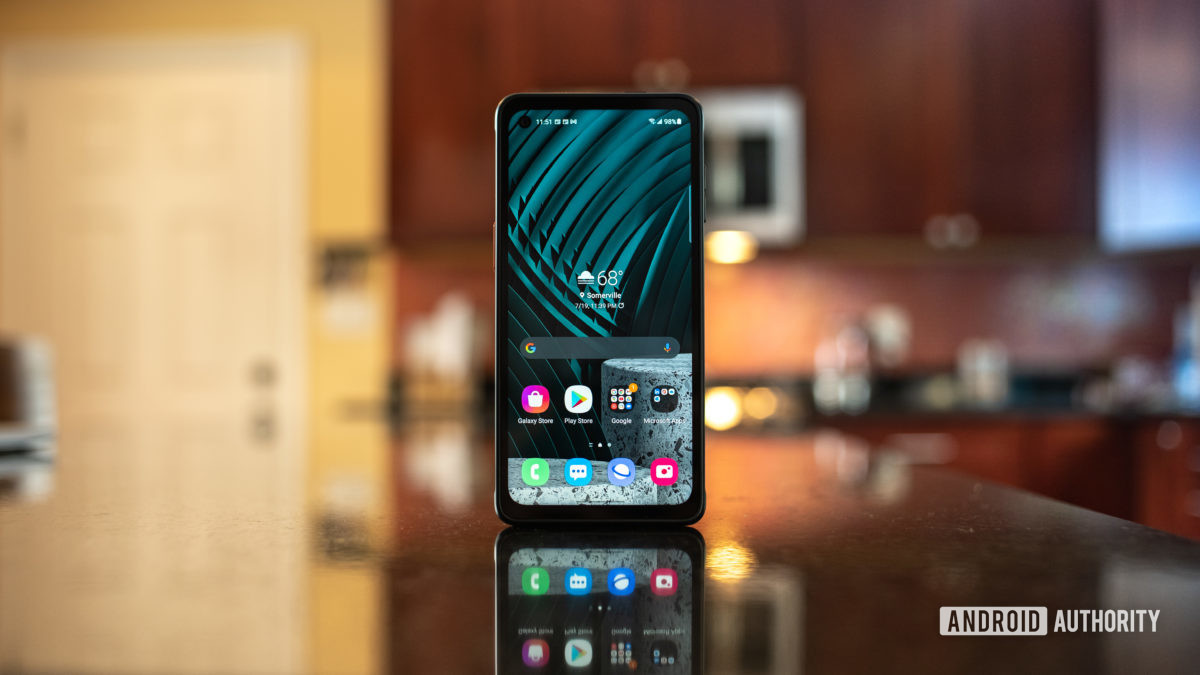 The sleeker design of the XCover Pro compared to other heavy-duty phones has its pros and cons. While the more traditional form factor is more comfortable to use than its rugged competitors, it doesn’t feel quite as durable in the hand. It ships with an IP68 water and dust resistance rating, Gorilla Glass 5, and a rubber exterior that is sure to handle a few drops. It’s also rated MIL-STD 810G for protection against shock, vibration, heat, cold, humidity, and more, though this isn’t the latest MIL-STD 810H rating offered by some rugged devices.

If a combination of durability and design is what you are after, the Samsung Galaxy XCover Pro might offer the best compromise. Still, even with the glass rating, I recommend using a glass screen protector on the display.

For testing, I dropped the phone a few times, submerged it under running water, and even threw it. In each test, the phone performed respectably. However, I might add that the removable plastic back of the phone felt a little fragile. The biggest downside of the design might be the uncovered ports of the phone. While they are sealed on the inside, I wouldn’t recommend submerging this phone in water for long periods of time. That said, it should be fine should it take a drop in the pool or a lake.

Apart from the sleek aesthetics, the best feature of this phone has to be the display. It’s no surprise that a Samsung device has a quality display, and the XCover Pro is no exception. The 2,340 x 1,080 6.3-inch panel is bright, with good contrast and sharpness, something I cannot say of other rugged alternatives I’ve tested. I wish Samsung offered more options to customize the color on the display, and while the color was bright, I found it was a little green for my liking. Still, it’s the best display on a rugged device that you’ll find.

The Samsung Galaxy XCover Pro has the best display we’ve tested on a rugged phone to date.

Considering the smaller size of the 4,050mAh battery, I was genuinely surprised by the better-than-average performance of the XCover Pro. In my day-to-day, I averaged about seven to eight hours of screen-on time, which consisted of a lot of streaming video, social media, light gaming, and photography. Unfortunately, the included 15W fast charger takes just over two hours to power up the phone, which is a considerable amount of time for a battery this small. Also, the XCover Pro does not support any form of wireless charging. What makes up for these drawbacks is the removable battery. You can find battery replacements online, and it was quick and easy to swap out batteries when I needed a full charge. This is definitely a plus for the XCover Pro, especially for those who want to use their phone for extended periods of time but won’t be near a power point. 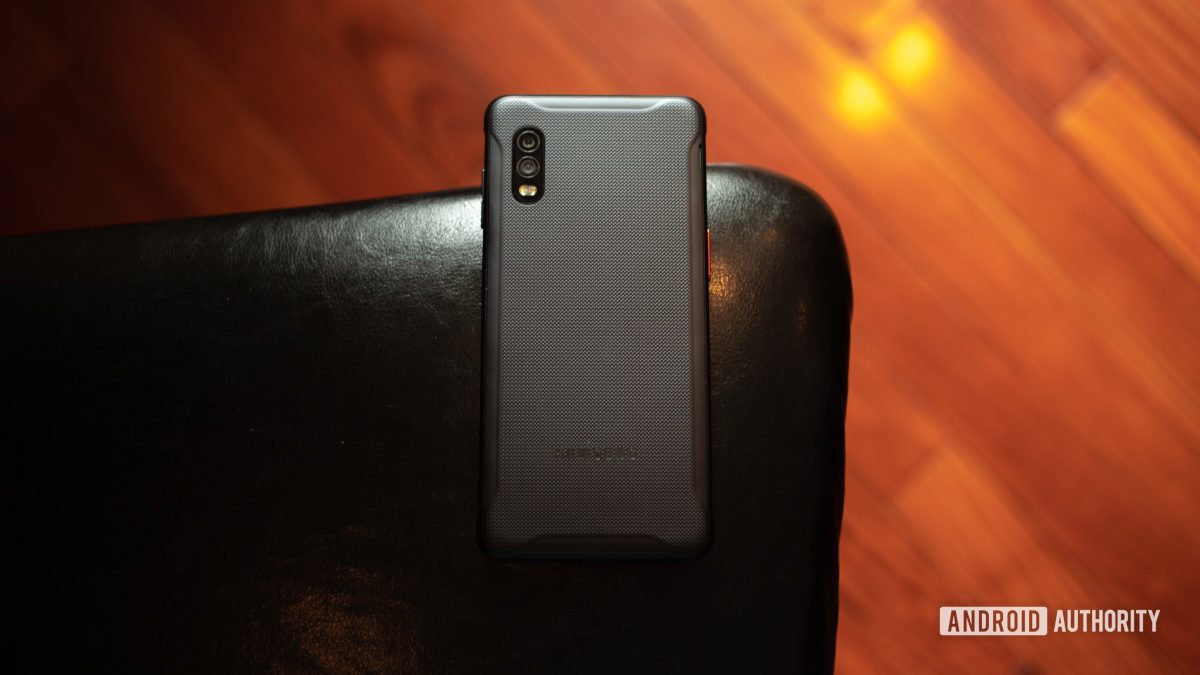 Up until this point, you might have thought the Samsung Galaxy XCover Pro was the best rugged phone around, but unfortunately, the phone has some drawbacks. The main one is performance. The Exynos 9611 is a low-clocked chip that’s coupled with a meager 4GB of RAM. Although navigating in apps is relatively responsive, loading times are pretty abysmal, and I had to wait a solid four to five seconds for apps or pages to fully load. Don’t get me wrong, the phone is usable, but it can be slow. Also, because of One UI 3, the phone has a considerable amount of extra stock apps and settings that can also lead to general sluggishness. Unfortunately, performance on this device lacks behinds competitors with mid-tier Snapdragon chips.

The smaller 4GB of RAM means the device is not built for speed.

Lastly, the Samsung Galaxy XCover Pro doesn’t feature any support for 5G, something that is found in a few other rugged phones around the same price. Also, although I praised the sleeker design, some might find it not durable enough. While it has an IP68 rating and certification for drop protection, the plastic design and removable back aren’t as reassuring as some of its metal/rubber counterparts. The device also lacks rugged features that could be essential for some consumers, like a night vision or thermal camera. So if you’re one of those looking for an absolute tank of a phone with some extra camera quirks, the Samsung Galaxy XCover Pro probably isn’t for you. Speaking of cameras, the XCover Pro has decent onboard cameras that compete with other offerings in the rugged genre but images tend to be a little softer than the competition.

You can find high-resolution versions of each image here.

Samsung Galaxy XCover Pro: Should I buy it? 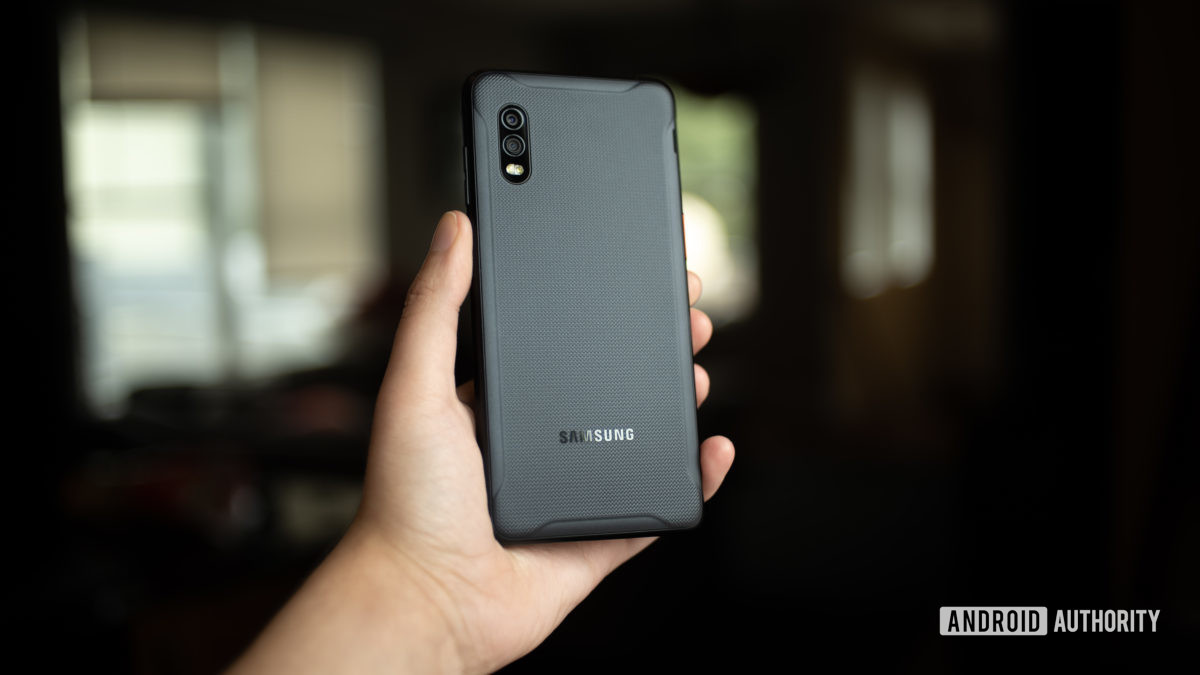 At first glance, the Samsung Galaxy XCover Pro seems to be a well-rounded, rugged device, but if you look closer, that well-roundedness turns into some apparent shortcomings. While I was impressed with the sleek design, Full HD display, and excellent battery life, the less than ideal processor performance and not-so-durable build make the XCover Pro a tougher sell. Although the $499 price point is fairly competitive, those downsides ensure the XCover Pro can’t compete with better value phones like the Doogee S96 Pro ($389) and Unihertz Atom XL ($329), or the more well-rounded Cat S62 Pro ($649). That, coupled with the absence of 5G and lack of features such as a night vision or thermal camera, make the phone feel less geared towards rugged consumers.

The Galaxy XCover Pro is a sleek-looking rugged phone, but there are more durable options available with far superior performance.

At the end of the day, the Samsung Galaxy XCover Pro outperforms in some major metrics but comes with some obvious shortcomings that make it a middle-of-the-road rugged phone.

This is the latest entry in Samsung’s range of rugged smartphones. It touts a removable battery, a modern design, and a whole lot of toughness.

How to swap bands on the Samsung Galaxy Watch 4

How to watch the Djokovic vs Medvedev: Live stream the US Open 2021 final o