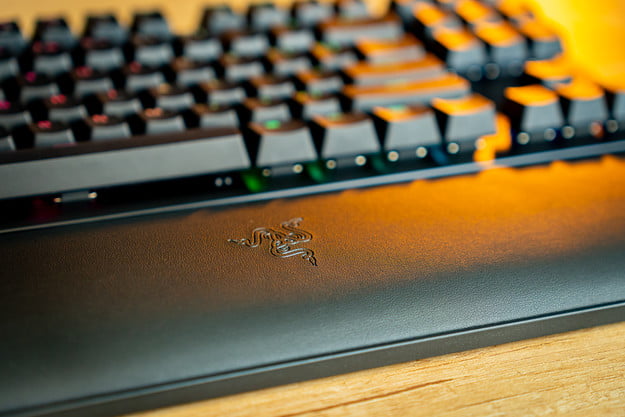 “Razer’s Huntsman V2 TKL is a gaming keyboard that will win you over with its smooth switches.”

Razer is releasing a new TKL gaming keyboard today, just a week after introducing its new Basilisk V3 gaming mouse. This one is dubbed the Huntsman V2 Tenkeyless, and we have a sample on hand to see if it’s any good and worthy of competing with the very best gaming keyboards you can buy.

The Huntsman V2 TKL is part of the Huntsman line of ultraperformance focused wired gaming keyboards, which are built to excel in competitive gaming without costing as gobsmackingly much as the BlackWidow series.

As a result, they aren’t the most feature-rich planks, but the Hunstman V2 TKL proves that its excellent switches and great form factor still make for a fantastic PC gaming companion.

Jump to: Design | | The switches | Gaming performance | Our take

When looking at the Huntsman TKL, the first thing that stands out about it is the simple design – it’s just a plain TKL keyboard without any fancy goodies in its peripherals. The media keys are integrated into the F-keys, instead of being dedicated, there is no volume roller, and there isn’t a ton of RGB goodness slathered in all sorts of obnoxious corners. There is some RGB, but it’s only under the main keys.

Pair that simplicity with the all-black design and the aluminum top plate, and you end up with a rather sleek keyboard that, oddly, doesn’t draw a lot of attention to itself. Razer used to be a company that built eccentrically styled gear that was unmistakably “gamer,” but nowadays, it appears to be leaning towards sleeker, more mature designs. Perhaps it’s growing up together with its core audience.

Also included with the Huntsman V2 TKL — and this is arguably the biggest upgrade from the original — is a pleather wrist rest. I first encountered this soft, plush wrist rest with the BlackWidow V3 Pro, and here, I’m still in love with it just as much. The height is perfect for comfort, and because it’s oh-so soft, typing with it becomes a real treat.

There are a few caveats: Its softness isn’t going to last forever – I do feel like the thin material will wear out by flaking relatively quickly, and on warm days, it may just be a bit too plush, leaving you begging for something more breathable.

Fortunately, Razer sells its wrist rests separately from the keyboards, too, so if you do type enough to wear it out, replacement shouldn’t be an issue. But moreover, the wrist rest doesn’t actually attach to the keyboard – there’s not even so much as a magnet to hold it in place.

The keyboard connects to your PC with a detachable, braided USB-C cable.

At the heart of it all, the reason why you’d want to buy a Razer Huntsman keyboard, are the optical switches, or as Razer calls them, the opto-mechanical switches. These came onto the market in 2018 and experienced a rapid uptick in popularity, for good reason.

Our sample of the Huntsman V2 TKL came with the red linear variant of the switches, and these are by far my favorite. Generally, I’m a tactile (brown) switch kind of guy, but in a keyboard as gaming-focused as the Huntsman V2 TKL, I prefer a linear switch. So, thank you Razer for these. The keyboard is also available with clicky optical switches, but there is no tactile option.

But what is it that I like about the opto-mechanical switches so much? It’s the smoothness.

Razer markets the optical switches as being faster, touting all sorts of wondrous terms such as “the speed of light” and “the fastest performance you’ll ever experience,” but I couldn’t care less about those things. Sure, in a scientific test, they might outperform classic electric mechanical switches because they don’t have to account for debounce, but if you find me one person who can tell the difference in speed in a blind test, I’ll buy you a beer. Maybe two.

But the smoothness. I can hardly begin to describe it, as there are few switches I’ve encountered that offer a similar smoothness in their travel. With a switch such as a Cherry, or Gateron Red, you could lube them and install damping O-rings on the stems – and only with all that effort could you get close to the same smooth travel.

The way the switches travel is so supple as to exude a feeling of luxury that you don’t get on many keyboards – at least not without entering the expensive custom keyboard territory.

It’s the opto-mechanical switch’s smoothness that makes the Huntsman V2 TKL so likable.

The switches are also nearly silent. Thanks to a layer of sound-dampening foam inside the keyboard, this is one of the quieter mechanical keyboards you’ll find.

There’s just one catch: Because the switches are optical, they consume more power than traditional electric mechanical keys, which means the keyboard cannot be wireless. So, there’s a cable. And the stabilizers are not the same as on Cherry-based boards. Most keys will fit, but the longer keys won’t. The stock keycaps are double-shot PBT, though, so most people won’t bother upgrading them.

When jumping into gaming, the Huntsman V2 TKL is a joyous companion. The keyboard’s smaller layout isn’t quite as game-friendly as something truly small like the Razer Huntsman Mini or the BlackWidow V3 Mini, or Corsair’s K65 RGB Mini, but it’s miles better than a full-size keyboard due to the added mouse space. This lets me play at a lower DPI, resulting in more accurate shooting.

Pair that with the comfortable wrist rest, height, and smooth switches, and you largely forget all about the keyboard when playing – and that’s about the best compliment I can give a keyboard. It’s all just smooth sailing.

Razer’s Huntsman V2 Tenkeyless is a simple but well-executed TKL keyboard for PC gamers. It isn’t wireless, which isn’t possible with optical switches (not without very limited battery life). It also doesn’t have media keys, and I have a few issues with the included wrist rest.

Despite those nitpicks, though, the excellent opto-mechanical switches and comfortable form factor will have you falling head over heels for it.

The closest alternative from Logitech is the G Pro mechanical keyboard, which packs largely the same feature set. But it doesn’t come with the same great switches, nor the comfy wrist rest, so I’d pick the Razer of the two.

Meanwhile, Corsair carries the K70 RGB TKL Champion Series, which does have media keys and also does 8K polling, but like Logitech’s board, doesn’t have the same comfortable switches. The wrist rest, again, is missing.

The Huntsman V2 TKL should last a minimum of five years under normal use, though I do expect the wrist rest will need early replacement during that time — maybe twice. Razer covers the keyboard with a two-year warranty.

Should I buy it?

Yes. Priced at $150, the Huntsman V2 TKL is one of the best off-the-shelf TKL keyboards currently available.