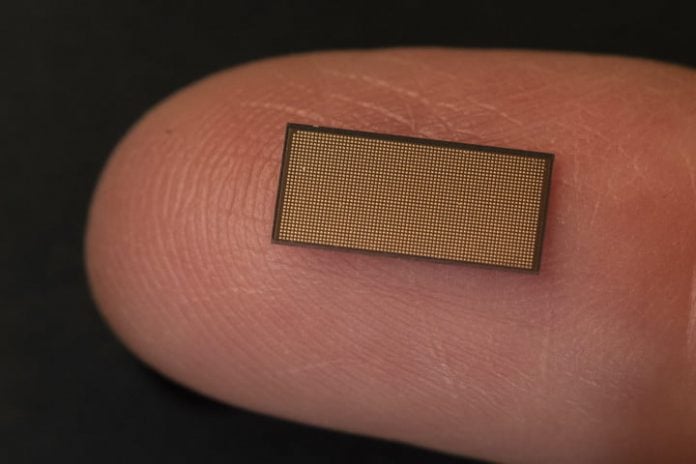 Intel announced that it has made some breakthrough advancements with its neuromorphic processors. The second-generation Loihi chip, known as Loihi 2, will be up to 10 times faster at processing algorithms and applications, the chipmaker stated, while still fitting on the tip of your pinky finger.

Advancements such as an Intel 4 processor and the use of extreme ultraviolet lithography, or EUV, allowed the company to pack the chip with 15 times greater resource density, which means that Loihi 2 squeezes in up to 1 million neurons per chip. Through neuromorphic silicon, Intel hopes to defy the limits of Moore’s Law that constrains processors today.

The company’s work in neuromorphic research had led to advancements like a smell-o-vision chip in the first-generation Loihi. Neuromorphic computing is based on neuroscience and how the human brain functions, and it’s aimed at delivering speed and efficiency in learning across a number of applications.

“Neuromorphic computing represents a fundamental rethinking of computer architecture at the transistor level, inspired by the form and function of the brain’s biological neural networks,” Intel explained. “Despite many decades of progress in computing, biological neural circuits remain unrivaled in their ability to intelligently process, respond to, and learn from real-world data at microwatt power levels and millisecond response times.”

The new chip is a product of three years of research at the Intel Neuromorphic Research Community. It features self-learning capabilities, new neuron models, and asynchronous spike-based communication. Like the malleable human brain, Intel hopes that compared to traditional chip architectures, Loihi will deliver greater efficiency and faster processing speeds while consuming far less power. In early demos, the company claimed that Loihi consumes less than 1 watt of power, which is significantly less than traditional CPU and GPU solutions. The new processor comes with a 2x gain on synaptic density over the original and its neuron cores are about half the size of the prior generation.

Intel predicts that neuromorphic computing can be used for search engines, robotics, and solving complex problems. The neural networks powered by Loihi 2 can be used for faster deep learning training, and Intel claimed that early testing showed that Loihi 2 delivered 60x fewer ops per inference compared to the original Loihi. Loihi 2 comes with 8x the number of neurons, with up to 80x better synaptic utilization, in a 1.9x smaller size than Loihi 1.

“This research has shown some exciting equivalences between spiking neural networks and quantum annealing approaches for solving hard optimization problems,” Kunde added. “We have also demonstrated that the backpropagation algorithm, a foundational building block for training neural networks, and previously believed not to be implementable on neuromorphic architectures, can be realized efficiently on Loihi. Our team is excited to continue this research with the second-generation Loihi 2 chip.”

Along with the architectural upgrade powering Loihi 2, Intel also announced the Lava software framework. Designed as an open and modular framework, Lava will allow developers and researchers to build on each other’s progress to arrive at a common set of tools, methods, and libraries, Intel said, noting that Lava will run on heterogenous architectures across conventional and neuromorphic processors. This makes it ideal for work in A.I. and robotics.

In addition to the robotic nose, early applications of Loihi and neuro-based silicon like Loihi include gesture recognition and learning, robotic arm control, and scene understanding. Autonomous cars could be a natural progression of this research, and Intel counts Ford among the 150 partners for Loihi.

Facebook
Twitter
Pinterest
WhatsApp
Previous articleReady to upgrade your mesh Wi-Fi? These are some of the best options.
Next articleWalmart is having a TECH FLASH SALE — save on laptops, TVs, and more
- Advertisment -