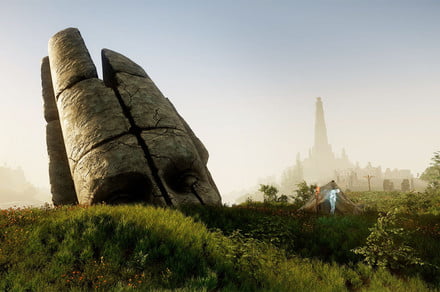 I’ve played New World for just over six hours with an RTX 3090, which I didn’t think would be a problem. In July, when the New World beta went live, users reported the game bricking expensive RTX 3090 GPUs. The issue was resolved shortly after, but now that the game is live, reports are cropping up again.

Although claims of the RTX 3090 failing are present again, players are also reporting issues with some RTX 3080 Ti and RTX 3080 models. In particular, the Gigabyte RTX 3080 Ti Eagle and the EVGA RTX 3080 FTW3.

So we knew this was going to happen. We have people sending in emails that their GPUs are no longer working after playing New World.

All this means is they didn't play the beta and we were anticipating those that didn't to have the same issues.

Originally, the problem was localized to EVGA RTX 3090 FTW3 cards. A couple of months after the beta, EVGA spoke up about poor soldering on the cards that lead to the failure and offered to replace the cards for any affected customers. It said it only received about 25 dead cards overall.

I don’t have an EVGA or Gigabyte card, but I’ve put about six hours into New World since servers went live on Tuesday. My RTX 3090 Founder’s Edition — which I was able to pick up after three hours in line at Best Buy — is still humming along. That said, I noticed some of the issues that others are reporting.

WinFuture identified certain “triggers” that put a high strain on the GPU. The main one is when you change graphics settings. In testing New World‘s performance to find the best settings, my card would ramp up to max fan speed and utilization whenever I moved from one preset to another, no matter the direction.

That’s because New World redraws the environment whenever you change graphics settings. If you move to another preset and you’re near water, for example, you’ll see all of the terrain replaced by water for a short period. After that, the terrain will slowly load in from a low-poly model to the final version. It’s quick on the RTX 3090, but it took almost 10 seconds on the AMD’s RX 580.

So, is it an issue with New World, a problem with certain graphics cards, or both? Unfortunately, we don’t know. Players on Reddit and Twitter would have you believe that turning on a frame rate limiter and V-Sync will solve the problem, but I spent hours changing settings and resolutions for testing without either turned on. And my RTX 3090 is still spinning.

I don’t have a Gigabyte or EVGA card, though, which suggests that the problem still stems from shoddy manufacturing. The original issue came from an uncapped frame rate in the menu, which would push the GPU to the limit and expose the problems in manufacturing underneath. For what it’s worth, New World includes a background frame rate cap now, which is turned on by default.

I haven’t worried about playing New World, but I might hold off for a few days now that failure reports are out. If you have an RTX 3080, RTX 3080 Ti, or RTX 3090 from Gigabyte or EVGA, I recommend you do the same.