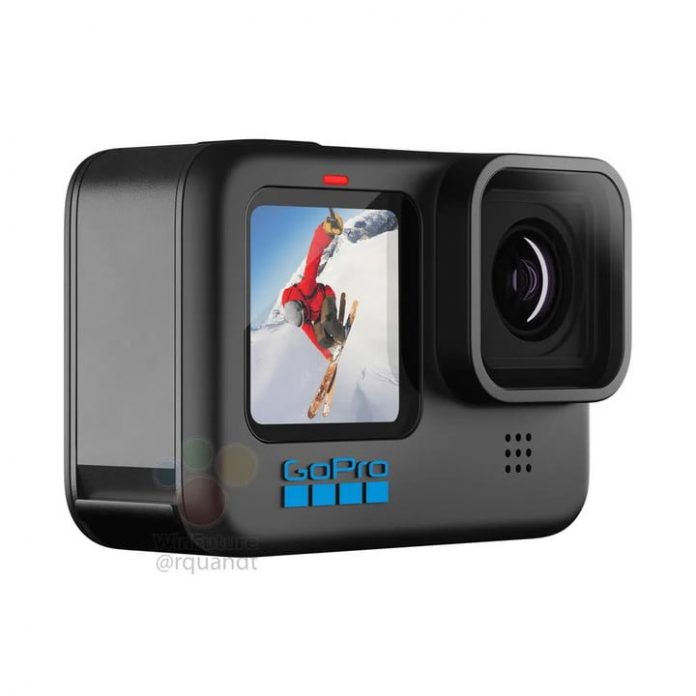 Images of the GoPro Hero 10 Black leaked yesterday, giving us our first look at images of the device along with specs. WinFuture, a German publication that previously leaked information about the redesigned Hero 9 Black in August last year was also the source of the latest leak.  A report on the website suggests the Hero 10 Black looks similar to its predecessor (Hero 9 Black) in terms of size, design, and external accessibility features. The only design difference so far can be seen in blue accents that spell out “10 Black.”

The major hardware changes we’re seeing are improvements to processing power with the new GP2 processor and an improved image sensor that beefs up from 20-megapixels to 23-megapixels The Hero 10 Black is also expected to support 5.3K video recording at a smooth 60 frames per second (fps), 4K videos at 120 fps, and 2.7K videos at 240 fps. The last one can help you create high-resolution slow-motion clips. This is a considerable improvement over previous models that only supported 5K recording at 30 fps and 4K recording at 60 fps.

Marketing materials seen by WinFuture hint that Hero 10 Black’s in-camera software stabilization will see an improvement to offer “gimbal-like stabilization”, after being upgraded to HyperSmooth 4.0 and TimeWarp 3.0 for time-lapse videos. Users can also enjoy an auto-upload function to transfer files online at a much quicker speed. The Hero 10 Black also supports 1080p live streaming, the same as previous models. Finally, the Hero 10 Black is said to offer 10 meters deep housing, touchscreen controls, and voice accessibility. Users can also access the webcam mode along with SuperPhoto and HDR options. These features combined with the improved recording capability have the potential to be a gamechanger for streamers and on-the-scene photographers.

The company hasn’t made a formal announcement so we don’t know how much the Hero 10 Black would cost. The previous edition, Hero 9 Black was released at $450 and is currently priced at $400 (excluding the subscription), so we can expect a number around this range, perhaps a bit higher. Given the scale of the recent leaks, the launch of the Hero 10 Black is likely to be imminent.