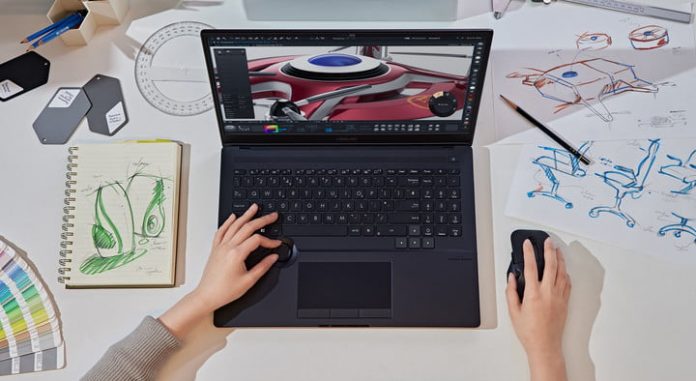 Asus announced updates to its ProArt range of laptops at the Create the Uncreated event on Thursday. The Studiobook, Zenbook, and Vivobook ranges are getting new models featuring 4K OLED displays, as well as the choice between an Intel or AMD processor.

The Studiobook range is the most expensive of the lot, targeting “creative pros,” according to Asus. There are four models available, two of which sit under the “Pro” umbrella. The Studiobook Pro 16 models are built with workstation-class parts, including up to an AMD Ryzen 9 5900HX or an Intel Xeon W-11955M.

These models come with Nvidia workstation graphics cards instead of GeForce cards, as well. The AMD platform features an RTX A2000 card, while the Intel platform goes up to an RTX A5000 card. The non-Pro models feature either an AMD Ryzen 9 5900HX or Intel Core i9-119000H, paired with up to an RTX 3070 or RTX 3060, respectively.

The exciting news is that all four models have access to a 16-inch 16:10 4K OLED display. OLED panels naturally have bright colors, deep blacks, and wide contrast (Asus says these panels come with a 1,000,000:1 contrast ratio). Studiobook displays come factory calibrated, as well, with Delta-E values of less than 2, and Pantone and Calman certifications.

In addition, the new Studiobook range comes with Asus Dial. This is a tiny rotary switch that sits between the keyboard and trackpad, which you can use in the operating system and creative apps. Currently, the dial supports over 70 functions across Adobe Premiere Pro, After Effects, Photoshop, and Lightroom, but Asus says it plans to add support for more applications in the future.

This dial isn’t exclusive to the Studiobook range, either. Asus plans on adding it to other devices down the line, and some devices, such as the Vivobook Pro, are getting a virtual version. On the Vivobook Pro, the dial lives under the trackpad and it lights up when you turn it on.

The Vivobook Pro range is getting a similar refresh. The eight new models all feature OLED displays, as well as the choice between up to an 11th-gen Intel Core-7 H-series or AMD Ryzen 5000 H-series processor. You can pair the CPU with up to an Nvidia RTX 3050 Ti and 32GB of RAM.

These machines come in several different sizes, too, unlike the Studiobooks that are locked at 16 inches. The “X” range features a 14- and 16-inch model, with a 2.8K or 4K OLED panel, respectively. The standard Pro machines are available in 14- and 15-inch configurations with either a 2.8K IPS or Full HD OLED display.

The oddball out of the lineup is the Zenbook. Asus only announced one new model — the Zenbook Pro 15 OLED. It comes in two variations like the rest of the range, either Intel or AMD. The Intel platform comes with the iconic ScreenPad, which sits below the main display and offers access to functions in apps or the OS. In addition to an Intel Core i9 processor, you can add up to an RTX 3070 graphics card.

The AMD model isn’t as powerful, restricted to an RTX 3050 Ti GPU. However, it still comes with an AMD Ryzen 5000 mobile processor and up to 16GB of RAM. Both versions feature a cutdown version of the OLED panel on the Studiobook series, boasting a huge contrast ratio and 100% coverage of the DCI-P3 color gamut.

The big news for ZenBook is the new Duo screen. The ZenBook Duo includes a separate screen below the main display, and now, Asus is operating that display separately. It’s Calman verified for color accuracy, and it includes two USB-C and a full-size HDMI port. In addition, it includes a larger version of the Asus Dial so you can use it in creative apps.

Asus is offering a separate OLED ZenScreen, as well. This 13-inch monitor uses the same OLED technology as the rest of the range and boasts the same excellent color accuracy. It includes an embedded tripod mount, so you can set it up almost anywhere, and it only draws 9W of power, so you can power it off a power bank.

In total, Asus announced 11 distinct laptop models. All of them feature OLED displays, as well as various burn-in prevention technologies like pixel shifting and pixel refresh. For us, the big news is the option between Intel or AMD. In a laptop, it’s not as simple as swapping out the processor. The manufacturer has to change the entire board, leading to distinct models in the range for something as simple as a processor switch.

Protect your Samsung Galaxy Z Fold 3 with these great cases