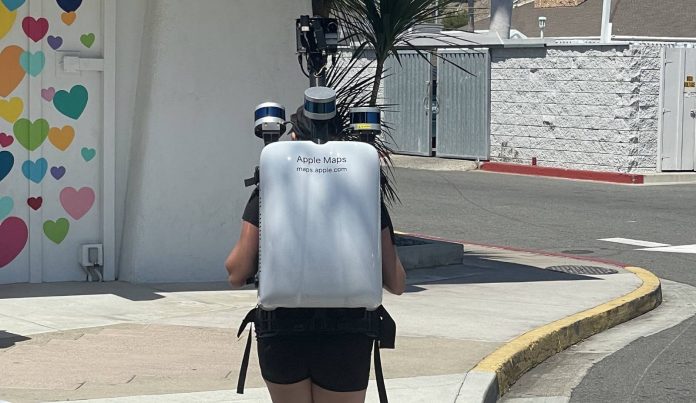 Apple Maps backpack in Southern California as spotted by Joanna Stern
Apple typically drives a fleet of vehicles around the world to collect Maps data, including street-level imagery for its Look Around feature, but it conducts pedestrian surveys “in areas where vehicles simply can’t go.” Apple promises that the pedestrian surveys offer the “same privacy protections as the Apple Maps vehicles.”

A list of locations maintained on Apple’s website reveals that the company began the pedestrian surveys in Toronto, Montréal, and Vancouver on September 11. Apple will also be surveying the Region of Durham immediately east of Toronto.

Apple says it is committed to protecting the public’s privacy while conducting these surveys. In line with Google’s Street View, Apple censors faces and license plates in imagery made available through its Look Around feature. If you have comments or questions about this process, your privacy rights, or would like to request that a face, license plate, or your own house be censored, Apple says to email [email protected]

Introduced in iOS 13, Look Around provides 3D street-level imagery that can be zoomed and panned. The feature is already available in Canada, but Apple periodically revisits some locations “in an effort to maintain a high-quality, up-to-date map.” Look Around is also available in parts of the United States, UK, Ireland, and Japan.Tag: Apple Maps
This article, “Apple Surveying Canada’s Largest Cities With Specialized Backpacks to Improve Maps” first appeared on MacRumors.com

Review: Deathloop lets you play a day you don’t want to end