HomeNewsWindows 11 made a change to how default apps work — and...
News 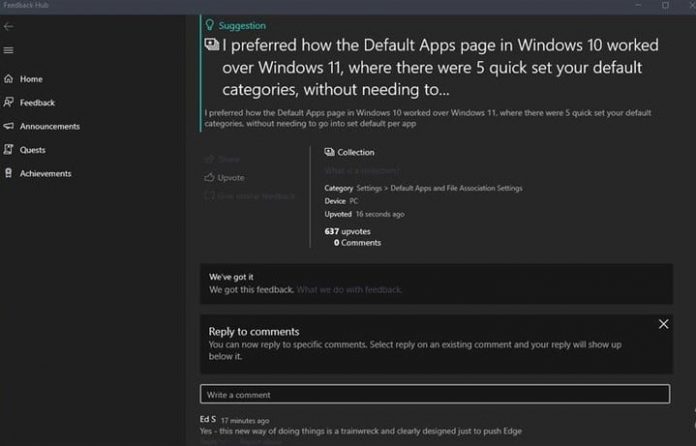 Microsoft is making it harder to set default apps on Windows 11. In the forthcoming version of Windows, if you don’t select the Always use this app box when opening a new app for the first time, Microsoft will never change the default.

In the current version of Windows, you can simply go on the Start Menu, type Default Apps, look for the drop-down menu and select the desired apps for all your browsing needs. However, this is not how it currently works in the upcoming Windows 11.

Since it’s very easy to forget to toggle the Always use this app option and simply launch the app, it’s disappointing to know that you will never see this option again if you miss your chance. Users who have tested Windows 11 are upset about this, as evidenced by the number of upvotes on a complaint published on the Windows Insider feedback hub.

On the upcoming Windows, default apps have to be set by file or link type instead of a single switch that can be toggled. For instance, in the case of Chrome, this involves changing the default file type for HTM, HTML, PDF, SHTML, SVG, WEBP, XHT, XHTML, FTP, HTTP, and HTTPS.

It is a much more time-draining process as compared to Windows 10, which allows you to switch default email, maps, music, photos, videos, and web browser apps much faster. Microsoft Edge, which is the default browser that Microsoft often pushes people to use, is a good example of the company forcing apps on people.

Windows 11 brought with it quite a number of changes, some of which fans are anticipating and others that are more controversial. According to the more than 600 upvotes on the complaint filed in the Windows Insider feedback hub, these changes to default apps clearly fit into the latter category.

In a statement to The Verge, a Microsoft spokesperson says: “We’re constantly listening and learning, and welcome customer feedback that helps shape Windows. Windows 11 will continue to evolve over time; if we learn from user experience that there are ways to make improvements, we will do so.”

Windows 11 is currently in beta, where Microsoft is constantly testing changes that have been made. Let’s hope this is one change that doesn’t make it into the final version of Windows 11.