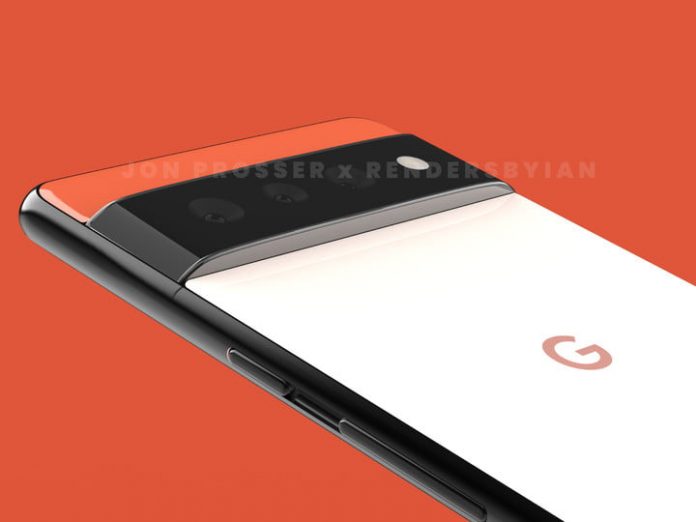 The Pixel 6 and Pixel 6 Pro have been officially teased by Google, complete with renders of the new phones, UI, and details about their new Tensor SoC (system on chip). The Tensor is Google’s first custom processor, allowing the company to join the ranks of Apple silicon and Samsung with Exynos.

Having control over both the hardware and software that goes into your phone can pay dividends in performance, optimization, battery life, and other features. Google’s Tensor chip shouldn’t be thought of as a shot across the bow for either Samsung or Apple, so much as Google finally weighing the cost-benefit analysis and deciding that its in-house chipset will pay off. CEO Sundar Pichai made it clear, tweeting, “Tensor builds off our [2] decades of computing experience and it’s our biggest innovation in Pixel to date.”

We’re still waiting for details on how the Tensor processor will translate into performance benchmarks, and we’re still unsure about the details of the CPU, GPU, and 5G modem. Some sources have reported that the Tensor chip is a three-cluster design, with two Cortex-A78 cores, two Cortex-A76 cores, and three Cortex A55 cores. There’s also some indication it’ll have an ARM Mali-G78, the same GPU as the Exynos-powered Galaxy S21 though it’s unknown if it’ll be the 14-core or 24-core variant. We also know that Google will incorporate a mobile Tensor Processing Unit (TPU) for A.I. processing and the Titan M2 chip for security.

Now, that raises the question of what this means for the rumored but still unconfirmed Google Pixel 5a and Pixel Fold. As the more affordable line of Google’s Pixel devices, the Pixel A series usually has a pared-down chipset compared to its flagship sibling. That was the case with the Pixel 4a, which had a Qualcomm Snapdragon 730G chipset compared with the Snapdragon 756G on the Pixel 5. In that case, if the Tensor processor is considered the “flagship,” then it wouldn’t be out of the question for the Pixel 5a to have a more mid-range Qualcomm Snapdragon chipset.

On the other hand, one of the reasons Google is pivoting to the Tensor processor is that the Snapdragon chips weren’t able to deliver everything Google wanted in terms of being able to run multiple A.I.-intensive tasks at the same time and applying computational processing to videos while being shot.

One area the Pixel A series doesn’t usually compromise on is camera performance, leveraging Google’s software processing chops with the same high-end hardware on the flagship models. We already know the camera of the Pixel 6 and Pixel 6 Pro has been revamped, with a new rear camera system.

“The team that designed our silicon wanted to make Pixel even more capable,” said Rick Osterloh, Senior Vice President, Devices & Services in a blog post.  “For example, with Tensor we thought about every piece of the chip and customized it to run Google’s computational photography models. For users, this means entirely new features, plus improvements to existing ones.” Failing to bring the same technology to the Pixel 5a would undermine the whole premise and appeal of the series, so it seems unlikely that Google would want to shortchange it so badly.

The pathway of the Pixel Fold is a bit clearer. Folding phones are expensive, from the rumored Samsung Galaxy Z Fold 3 and Flip 3, the Microsoft Surface Duo, and Motorola Razr 5G. While it’s not universally true that they’re specced to the same level as flagships, that has generally been the case for Samsung’s foldables, with the Z Fold 2 and Z Flip 2 both having the same Qualcomm Snapdragon 865+ processor as its mainstay Galaxy S21 series.  We’d be shocked if the Pixel Fold didn’t have a Tensor processor to make it competitive against the other foldable it’ll be going up against.

One last consideration though is the ongoing chip shortage. With manufactures in many industries feeling the crunch, it’s an open question if Google will have enough chips to fill the orders of the Pixel 6 and Pixel 6 Pro, let alone a speculative Pixel 5a and Pixel Fold. According to Engadget, Google is confident it can manage the demand despite the chip shortage. One report also suggests that Google has partnered with Samsung to mass-produce the Tensor chip, though some of the production may also go to TSMC.

Where that leaves us is with a Pixel 5a and a Pixel Fold that are both likely to be powered by a Tensor chip and boast the same camera hardware and software enhancements as the Pixel 6 and 6 Pro. How this translates into real life, day-to-day usage remains to be seen.