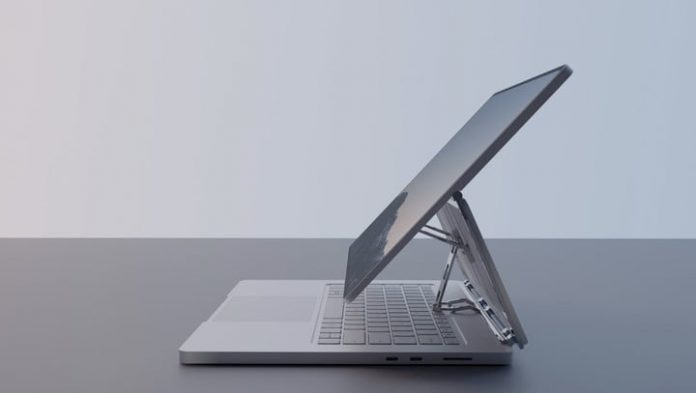 According to recent rumors, Microsoft is working on a new Surface Book device that uses a nondetachable screen, propped up in a way that resembles an iPad Pro connected to the Magic Keyboard. And now, we’re seeing some beautiful concept renderings that bring the rumors to life.

While not much is known about the upcoming device, which may be called the Surface Book Studio, these artist renders give an idea of what it could look like. Designer David Breyers published the renderings in a recent YouTube video, showing off its unique hinge that allows the laptop to transform into a few different modes, including one that mimics the hinge of the Surface Studio 2 all-in-one — hence the name.

The renders are based on patents Microsoft applied for earlier this year. The patents show the laptop being able to convert from its normal default appearance to a floating screen. An easel-like mode is also possible as imagined in the renders. The floating screen and the hinge design look very similar to the iPad Pro and the Magic Keyboard, as well as laptops like the Acer ConceptD 7 Ezel.

The images shown here are unauthorized, of course, are no more than guesses about what the final design will look like. Still, they offer an interesting take on what Microsoft could launch.

Microsoft is rumored to announce the release of multiple Surface devices toward the end of the year at its annual October hardware event. One of these devices could be the Surface Book Pro or Surface Book Studio, alongside an updated Surface Pro 8, Surface Duo 2, and more.

The upcoming laptops, regardless of what they’re be called, will reportedly leverage a heavier processor and RTX graphics card, a better display, an improved Surface Pen with updated haptic feedback, and a larger trackpad. They will run the Windows 11, of course, and could hit the shelves this holiday season.