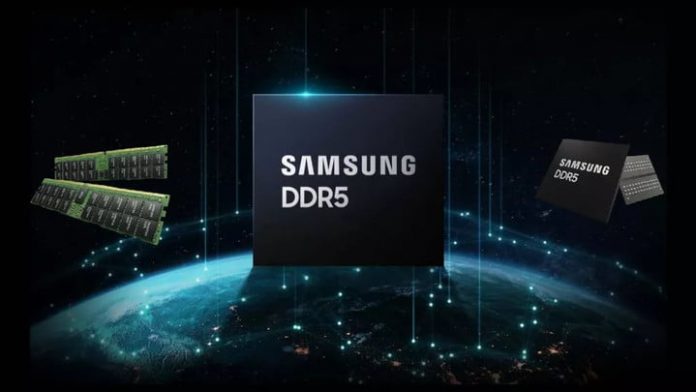 Samsung is among the brands that will release DDR5 RAM this year — and it seems the manufacturer has an industry- first in the works. During Hot Chips 33, an annual semiconductor disclosure event, Samsung revealed the development of its first DDR5 512GB RAM module. This new memory module is said to offer an up to 40% increase in performance over DDR4, combined with double the capacity and a lower voltage.

The announcement of the new massive memory stick was accompanied by more in-depth information about its architecture. DDR5-7200 is going to be a 512GB module made out of eight-stacked DDR5 dies. The dies are said to be connected with the use of through-silicon via (TSV) technology. The upgrade to eight dies is significant. It shows a marked improvement over DDR4 memory, which was always limited to four dies even in the best RAM available.

Samsung is set to release its new DDR5 memory by the end of this year. (Image credit: Samsung)

Although Samsung’s DDR5-7200 features a denser design than previous DDR4 modules, the new stack only measures 1.0mm, which is less than DDR4’s 1.2mm. The size reduction was achieved through Samsung’s new thin wafer handling technique, which reduced the gaps between the dies by 40% and resulted in a considerable height reduction.

Aside from a thinner design, the new module is also going to operate at a lower voltage. According to Samsung, DDR5-7200 is going to run at 1.1V, which is just 0.92x the voltage used in DDR4 RAM. DDR5 was made more efficient through the use of high-efficiency power management integrated circuits (PMIC) and a voltage regulator. It was also combined with the High-k Metal gate process. Samsung says the use of PMIC did more than just lower the voltage — it also reduced the noise.

The new memory modules are also going to feature Same-Bank refresh (SBR). The DRAM bus is said to be up to 10% more efficient than its current DDR4 counterparts. Samsung also equipped its new RAM with a new decision feedback equalizer (DFE) to improve the stability of the signal. Lastly, the module will have an on-die error-correction code (ODECC) that responsible for the security and reliability of data handling.

Although the prospect of 512GB memory in a personal computer is dazzling (if largely over the top), Samsung’s new modules are not being produced for regular desktops. DDR5-7200 is aimed at the server and data center markets, but DDR5 memory for the consumer market is also on the horizon.

It’s safe to assume that consumer-level memory will max out at 64GB. However, the fact remains that the upcoming motherboards and processors from Intel and AMD are going to allow regular users to have previously unheard of amounts of RAM. If all predictions come true, mainstream users will be able to build or buy a PC with 256GB RAM once DDR5 memory is out.

Samsung predicts that the mainstream market will not shift to DDR5 RAM until 2023 or even 2024. However, the manufacturer is planning to start mass-producing DDR5-7200 512GB RAM by the end of this year. Some manufacturers, such as Corsair, will be quicker to release their iterations of DDR5. The brand is looking to release DDR5 memory alongside Intel’s new generation of processors, Alder Lake, which is expected to hit the shelves this fall.

Facebook
Twitter
Pinterest
WhatsApp
Previous articleNordVPN has the best VPN deal you can shop today — SAVE $225!
Next articleAMD Ryzen Zen 4 processors could get a big graphics boost in 2022
- Advertisment -