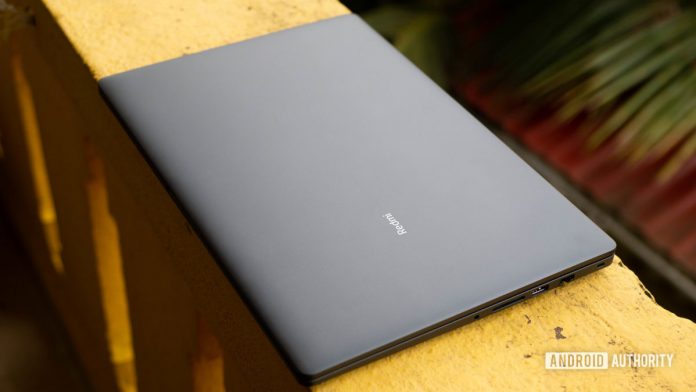 Xiaomi’s Redmi brand has entered the laptop market in India with the new RedmiBook 15 Pro. Redmi’s modus operandi with its phones has been about getting the best hardware for the price. With the RedmiBook 15 Pro, the brand is doing something a bit different. It’s the first laptop from Redmi to make its way outside China, and brings with it some solid specs.

The question is, is it worth your money? Let’s dive into Android Authority’s RedmiBook 15 Pro review.

What you need to know about the RedmiBook 15 Pro

Redmi has launched two versions of this RedmiBook in India. There’s a RedmiBook 15 e-Learning Edition that comes with an 11th gen Intel Core i3 CPU and SATA SSD options, at a lower price. The RedmiBook 15 Pro is the top-of-the-line version, with just one SKU.

Related: The best cheap laptops you can buy

For your money, you get a polycarbonate build with a brushed metallic finish. Notable features include a full SD card reader, a very roomy touchpad with support for Windows Precision drivers, and a collapsible Ethernet port. There are also stereo speakers on board. The laptop weighs in at 1.8kg (3.97lbs). There are a few notable omissions, like a backlit keyboard, and USB-C ports.

The RedmiBook 15 Pro is priced at Rs. 49,990, and the laptop is now available in India via Flipkart and Mi.com.

How is the design? 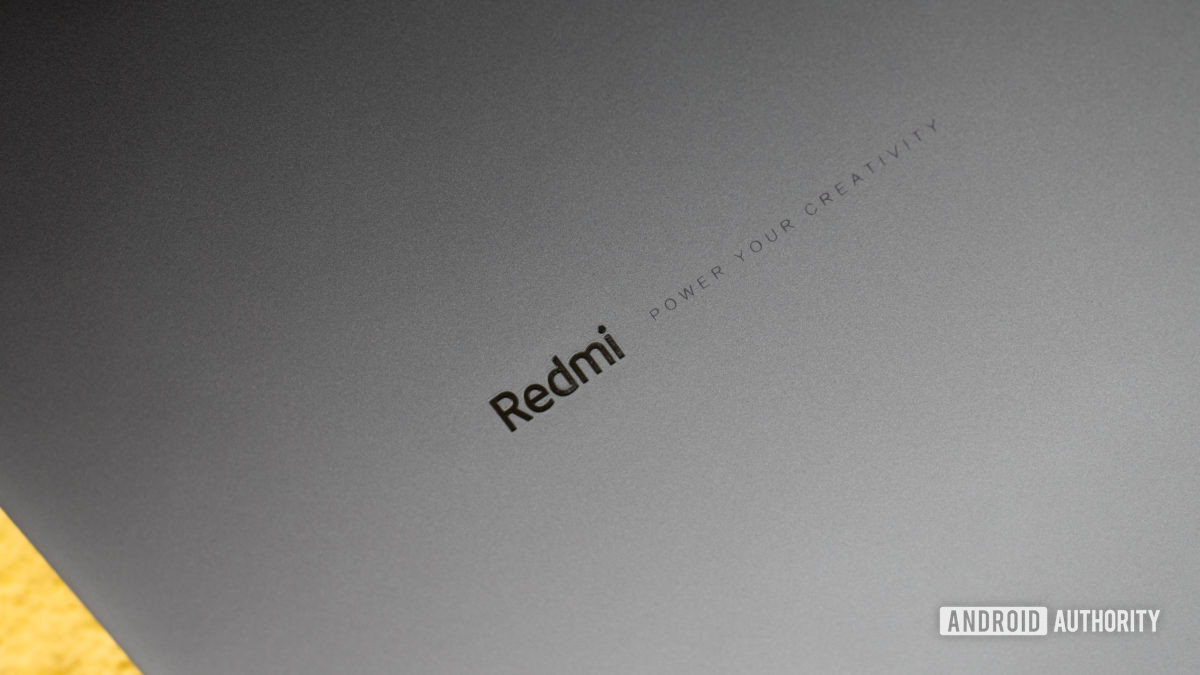 The RedmiBook 15 Pro is a low-profile laptop. It comes in only one color — a rather muted grey. The feel is quite premium, although we have concerns that the wonderfully large palm rest may show signs of age soon due to the polycarbonate material, which smudges pretty easily. In terms of design, there’s nothing flashy here. A small Redmi logo adorns the top of the laptop, but that’s about as far as the brand identity reinforcements go.

That’s not necessarily a bad thing, of course. The muted design may come off as a lack of personality to some, but the design is more good than bad. In terms of aesthetics, I never felt like I was using a laptop that would stick out. If you want a fancy-looking laptop, this is the wrong price segment to look at anyway.

Also read: The best new laptops to look forward to

There are some thoughtful touches, like the rubber padding extended along the edge of the display side of the lid, and the large trackpad that gives way to a comfortable palm rest. The air vents at the bottom are potentially a pain point for lap users, but being one myself, I never felt this laptop get warm enough to be uncomfortable.

The RedmiBook 15 puts function over form, and in this segment, that’s a good thing. My issue with the laptop ended up being the hitches in the “function” part of the laptop. Speaking of…

How is the screen? 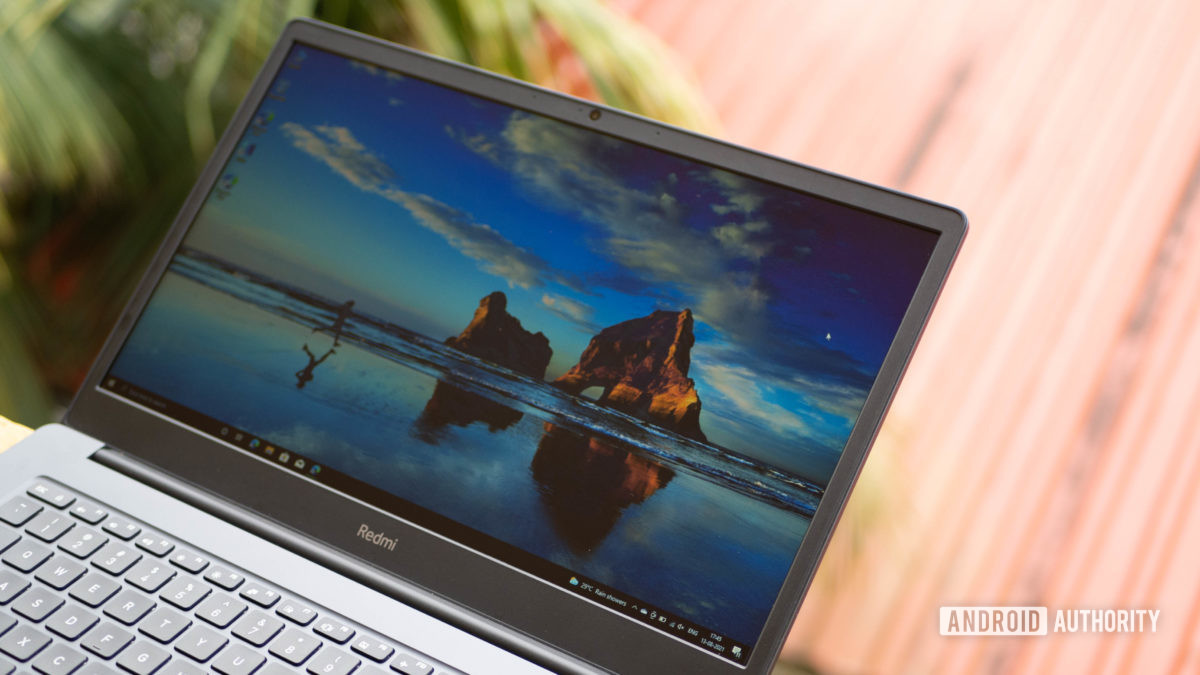 It may seem like a harsh critique, but this display is indeed the worst thing about this laptop. Not only that, it is the worst display I’ve ever used on a device from Xiaomi. It’s a 15.6-inch display with a Full HD resolution. Those numbers are great on paper until you turn on the RedmiBook 15 Pro and see the horrors of inaccurate colors, terrible viewing angles, and bad contrast.

If you want to use this display for reading or streaming, it would amount to an uncomfortable experience. The colors are whitewashed, making the screen unpleasant to look at. The viewing angles are so bad that if you tilt the screen even slightly in any direction, you’ll notice a loss in visibility. The ugly bezels don’t help, either, but could have been excused if the screen was better.

The brightness is acceptable, but the display is unusable unless you’re viewing it at a particular angle, and any bit of angle shift greatly degrades the already shoddy experience.

I would have given the display a pass were this laptop much, much cheaper, or if it had been released half a decade ago. It is particularly disappointing to see such a bad display on a Xiaomi device, given the company’s reputation for including some great displays in its other products over the years.

The display may seem like a minor issue with an otherwise well-rounded laptop, but it’s not. It’s an inexcusable one that negates a lot of what’s good with this laptop, putting it squarely below the rest of the competition. 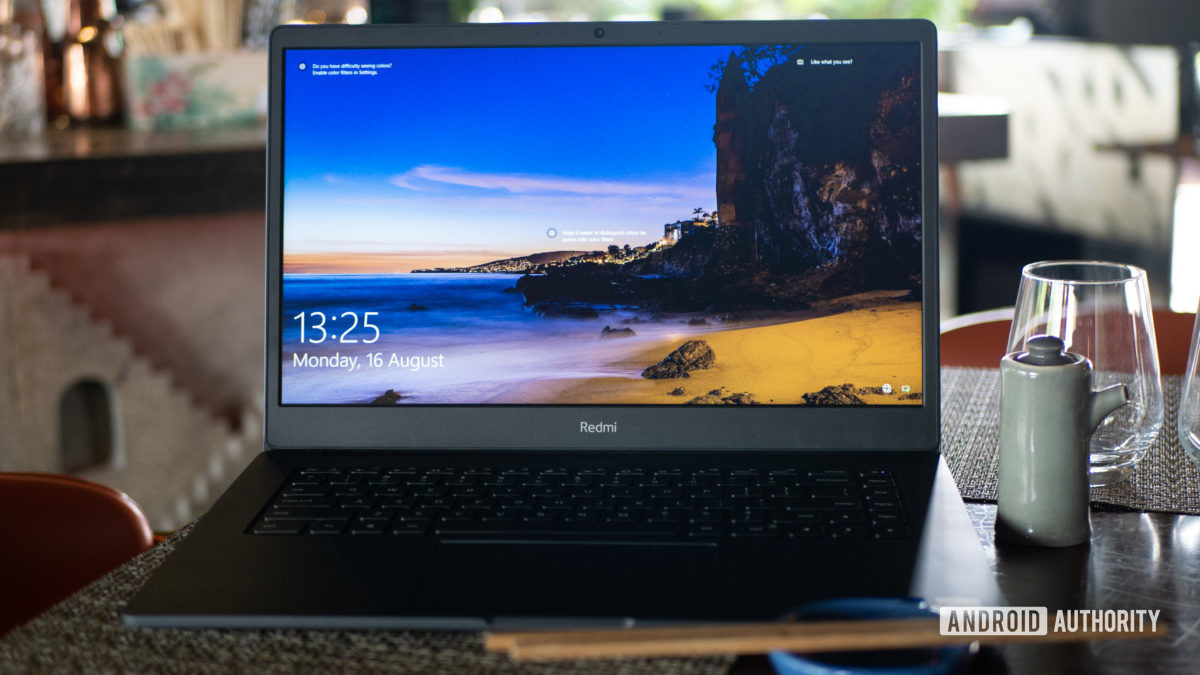 The RedmiBook 15 Pro carries a 46WHr battery, comes with a 65W power adapter, and promises 10 hours of battery life.

During my testing, it came close to the promised figure. My workflow is rather light, but it involves a ton of web browsing in the Chromium-based Microsoft Edge. I had audio playback on in the background every now and then, and the RedmiBook laptop gave me between 9-10 hours of battery life.

Stressing the laptop with streaming movies and music videos with downloads going on in the background did drain the battery quicker than I had expected, but I still got a solid seven to eight hours from it. The RedmiBook 15 Pro should be able to give you the promised “all-day battery,” and get you through a workday unless you’re doing some power-intensive work like video editing.

The provided charger is pretty solid too, boosting the RedmiBook’s battery from under 7% to 50% in 30 minutes, and taking about 90 minutes for a full charge. So even if this laptop does not last you the entire day, you can get a quick top-up to push it over the finishing line.

The charging options are limited to the regular old barrel plug, though, since there are no USB-C ports on this laptop.

How powerful is it? 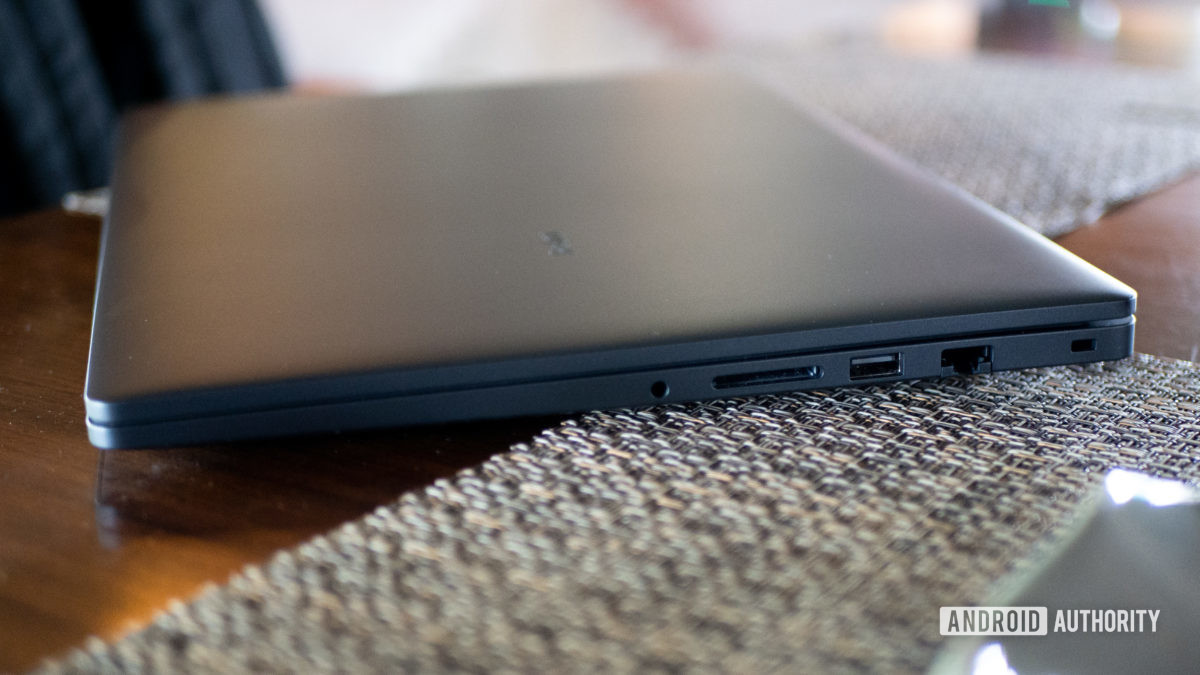 The RedmiBook 15 Pro didn’t stutter even once throughout my usage. It was always responsive, and the Core i5 processor definitely showed its might. This laptop could handle my regular web browsing usage with multiple tabs in Microsoft Edge. It also did well with some photo editing in Adobe Lightroom.

The 8GB of RAM is the only majorly limiting factor on this laptop since there are no SKUs with higher RAM options either. This became apparent to me when I tried to have a lot of tabs active in Microsoft Edge, which made the laptop hit maximum RAM usage. 16GB RAM would’ve been better, but 8GB should suffice for most use cases.

Coming to the ports, the RedmiBook 15 Pro falls behind the competition. With at least one USB-C port being the standard on most laptops, this is a glaring omission from Redmi. Redmi has added a full-sized SD card reader, but that’s a much more niche feature than a USB-C port, so it doesn’t quite seem an acceptable trade-off.

It’s nice to see a collapsible Ethernet port, though, especially since it’s a rare occurrence on laptops in this segment. 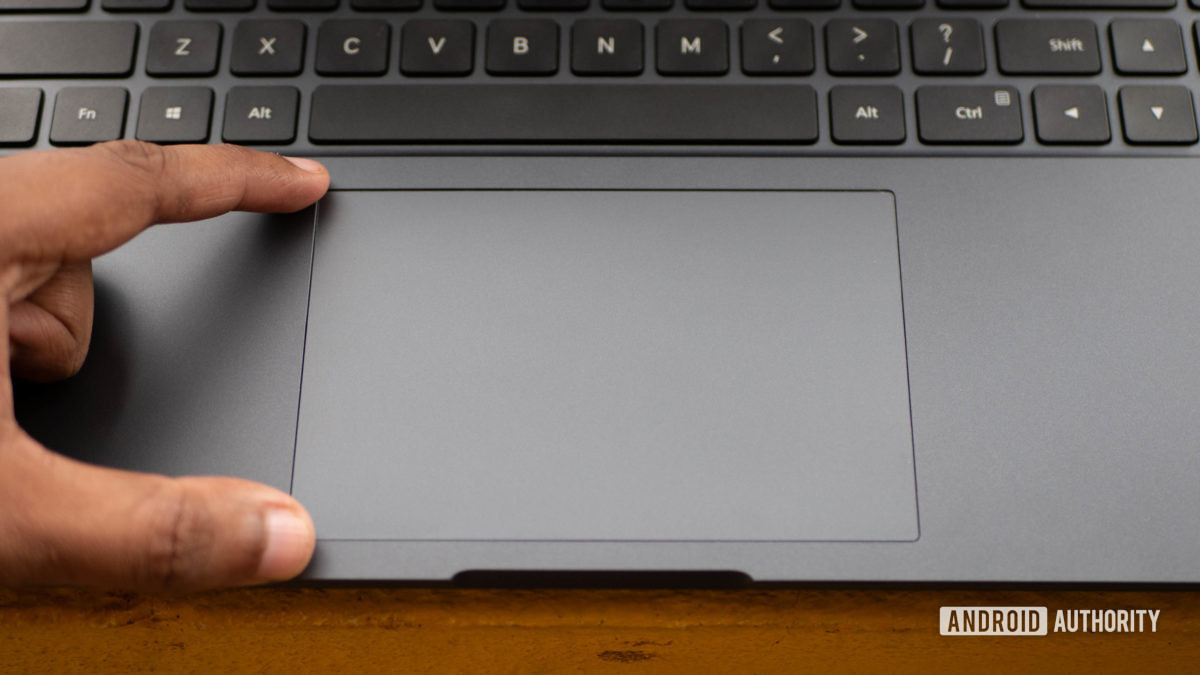 Redmi’s first laptop to be available outside China offers an 11th Gen Intel Core i5 processor, 8GB of DDR4 RAM, and a 512GB NVMe SSD, all packed into a 15.6-inch form factor.

Unlike the Mi Notebook 14, the RedmiBook 15 is not a unique offering at this price point. If anything, it’s swimming in a sea of laptops that are much easier to recommend given they don’t have the damning flaws of this one. They also come from brands that have more experience in making computers.

If you really want to pick up a RedmiBook 15, it would make more sense to go with the e-Learning Edition rather than the Pro. Even then, Xiaomi’s own Mi Notebook 14 (Rs. 41,999) provides better value at that price mark.

Also read: The best laptops you can buy

The RedmiBook 15 Pro also limits your purchase options by offering only one SKU. There are no spec bumps on offer that will make more sense, at a different price.

Is it the worst value for money you can get from a laptop at this price? Perhaps not, but it is definitely closer to the lower end than the higher end. 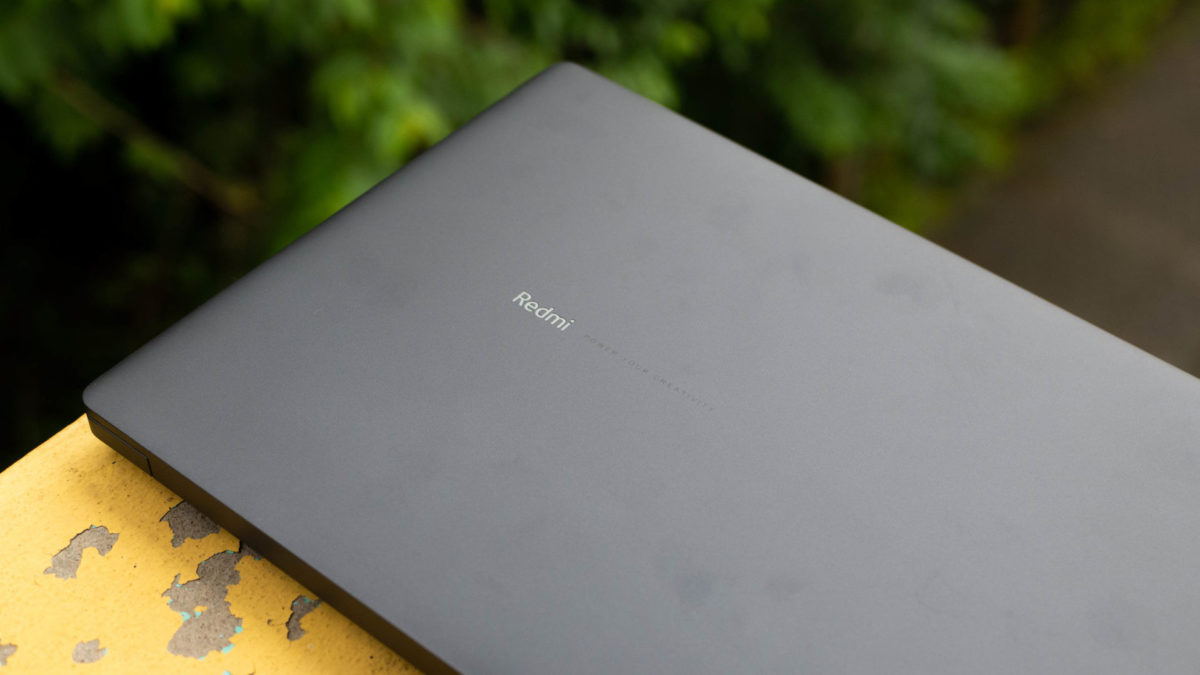 The RedmiBook 15 Pro is, all things considered, a disappointment. It hides behind small mercies, hoping that the shiny spec sheet on paper will make up for the terrible display, or omission of crucial features. The processor numbers and boot time figures are no match for the discomfort you get when you actually open the laptop and look at the terrible screen.

This approach comes off as even more of an insincere attempt given that Xiaomi is now teasing these exact deficiencies as the highlights of its upcoming higher-end laptops. The RedmiBook 15 Pro has no business being this bad unless the brand wants to upsell you on a different offering, which it seems like it might attempt to do. Xiaomi may be fighting for the title of the top smartphone brand worldwide, but it’s not nearly as strong with laptops. It can’t get away with the price to performance ratio being this weak, at least not this early in its laptop career.

I’ve recommended a ton of Xiaomi and Redmi products over the years. I’m recommending that you do not buy this one.

Will the RedmiBook 15 Pro get your work done? Yes. Will the battery get you through a day? Yes. Should you buy it? Not when there are far better options available. You can definitely get better laptops at this price, and it seems highly possible that Redmi can also make better laptops at this price. Until then, consider spending your money elsewhere.