HomeNewsNvidia leak hints that its most powerful GPU yet could arrive later...
News 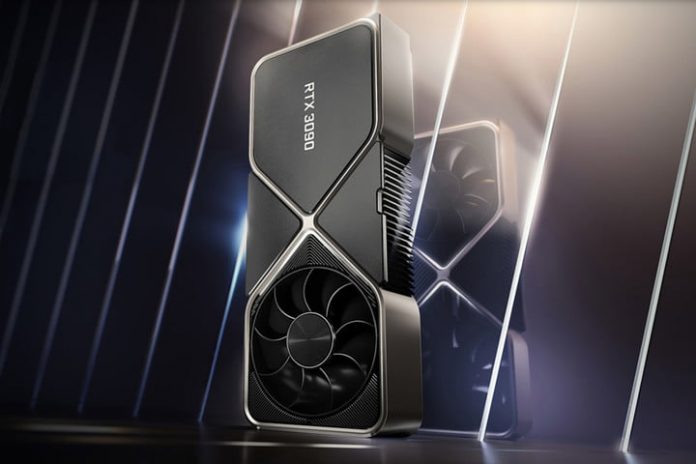 While some gamers are already looking ahead to Nvidia’s RTX 40-Series, it seems that the manufacturer might be working on a new line of graphics cards. in the 30-Series. Rumors about the possible upcoming release of the RTX 3090 Super have recently emerged, suggesting that Nvidia’s most powerful card to date is going to be dethroned by a new successor.

The rumors came from two leakers with a proven track record: Greymon55 and kopite7kimi. Both of these Twitter users went into greater detail about the card, revealing more about the specs of the suspected RTX 3090 Super.

According to the leak, Nvidia might be about to max out the technology used in RTX 30-Series graphics cards. The silicon used in Nvidia’s current generation of high-end GPUs is the 8 nm GA102 chip. This chip’s power caps out at 10,752 CUDA cores, 84 RT cores, 336 Tensor cores, 336 TMUs, and 112 ROPs. These specifications are exactly what the rumored GPU is supposed to be sporting.

Aside from getting the most out of the GA102 silicon, Nvidia is likely to pair it with the fastest GDDR6X memory possible. The RTX 3090 Super is rumored to have a data rate of 21 Gbps, which is a fair bit more than its predecessors. The RTX 3090 has a GDDR6X memory of 19.5 Gbps, with the RTX 3080 and 3080 Ti following closely at 19 Gbps. As the card is rumored to have a 384-bit wide memory bus, this kind of speed suggests a full 1 TB/s of memory bandwidth, which is faster than of the best graphics cards currently on the market.

With the massive power this card provides also comes a jump in total graphics power (TGP). Greymon55 predicted on Twitter that the RTX 3090 Super will likely require at least 400 watts of power. This is a huge jump over the previous cards, as both the RTX 3090 and RTX 3080 Ti only required 350W.

If the rumors are confirmed, this GPU will be the first Super card in the RTX 30-Series generation of graphics cards. The leak says that we can expect a launch in 2021, which means that the release of Nvidia’s best GPU to date is very close. There has been no speculation about the pricing or the exact date yet.