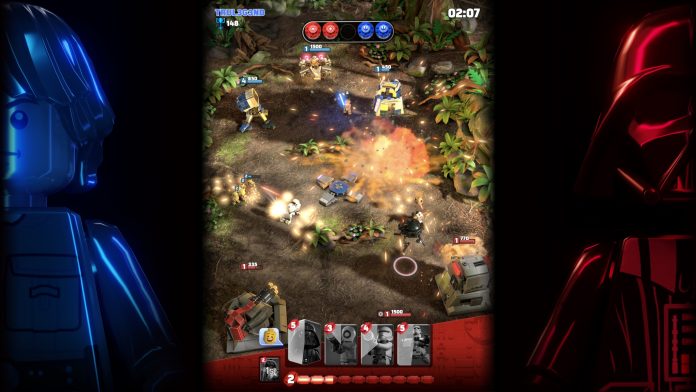 Apple today announced that LEGO Star Wars Battles from TT Games and Warner Bros. Games is coming soon to Apple Arcade for the iPhone, iPad, Mac, and Apple TV. A specific release date has not yet been shared, but users can sign up to be notified when the game is available by tapping on the “get” button on the game’s Apple Arcade listing.

Developed by TT Games Brighton and published by Warner Bros. Games, in collaboration with Lucasfilm Games, the tower defense game will task players with leading their favorite LEGO Star Wars characters into fast-paced, competitive battles. Players will mix and match characters and vehicles from all eras of the Star Wars galaxy and build LEGO towers on the battlefield as they attempt to destroy their opponent’s base.

Players can collect iconic characters such as Luke Skywalker, Rey, Obi-Wan Kenobi, Boba Fett, and Darth Vader, and a variety of vehicles and starships, including the Millennium Falcon. As players progress and level up, they will unlock different arenas based on familiar Star Wars locales, including Scarif, Naboo, Hoth, Endor, Geonosis, and more.

Priced at $4.99 per month or $49.99 per year, Apple Arcade provides access to a catalog of over 200 games without ads or in-app purchases across the iPhone, iPad, Mac, and Apple TV, with additional titles added periodically.