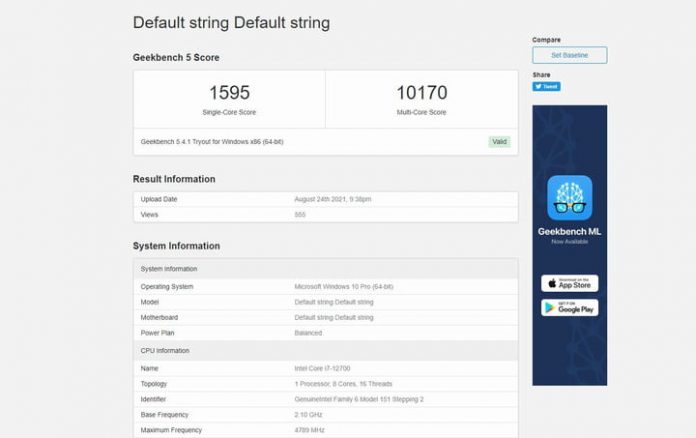 Following an unfavorable leaked Alder Lake benchmark earlier this week, another benchmark has been leaked through Geekbench. Unlike the previous benchmark, this one was testing processor performance exclusively, and the results are more disappointing they we expected. However, there’s a little more going on than the final result.

The leaked test is for the Core i7-12700. Note that this is the non-K model, meaning the processor isn’t unlocked for overclocking. In the Geekbench 5 CPU test, the processor earned a single-core score of 1,595 and a multi-core score of 10,170. Although multi-core performance provides a big boost compared to the previous generation, the single-core result doesn’t stack up.

What’s interesting about this benchmark is how the single- and multi-core results compare together. The new Alder Lake chip shows about an 8% improvement in the multi-core test over last-gen’s Core i7-11700, which is respectable for a processor that hasn’t released yet. Still, the single-core score is lower for the Alder Lake chip.

That bring into question Intel’s hybrid strategy with Alder Lake. It combines performance (P) and efficient (E) cores to boost multi-core performance, but the leaked benchmark suggests that could come at the cost of single-core performance. There are some other interesting things to note about the benchmark, though.

It lists the Core i7-12700 as having eight cores and 16 threads. Intel hasn’t confirmed the specs of this processor, but rumors suggest that it will come with eight P-cores and four E-cores. The P-cores include hyperthreading and the E-cores don’t, giving the processor a total of 12 cores and 20 threads.

Multi-core workloads are where hybrid architectures shine, as they’re able to properly delegate tasks to a core where they’ll see the most benefit. Intel’s Thread Director feature should help with how tasks are assigned on Windows 11 as well. This benchmark was run on Windows 10.

Regardless, Alder Lake has a lot to prove for Intel. The company has had some issues with consumer processors over the last few years, as AMD continues to assert its desktop dominance. Alder Lake could change that, but if this leaked benchmark is accurate, that doesn’t look likely.

Facebook
Twitter
Pinterest
WhatsApp
Previous articleGoogle Pixel 5a vs. Apple iPhone SE: Which should you buy?
Next articleUpdate Google Chrome now to protect yourself from these severe vulnerabilities
- Advertisment -