How to dive in Madden 22 and why you should 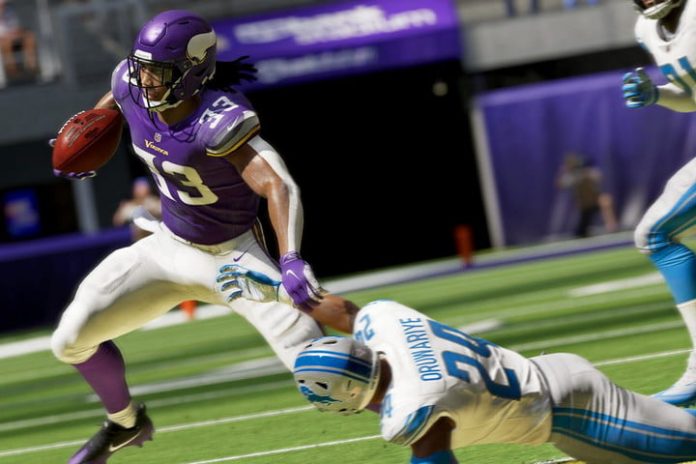 There’s nothing quite like watching a running back or wide receiver dive for the end zone pylon as defenders are barreling down on them. It’s great in real life, and it’s great in Madden 22. Between all the different button commands and mechanics you can make pre- and post-snap, diving is the simplest ball carrier move you can execute. So how do you dive in Madden 22, and when is the best time to lunge for extra yards?

How to Dive in Madden 22

It’s fourth and goal and the Tennessee Titans are down by five. With one play left, putting the ball in Derrick Henry’s hands is the logical choice. Even though Henry is the biggest and baddest bruiser in the league, he risks being stuffed at the line of scrimmage and losing the game. While everyone on both sides of the ball expects Henery to force his way through the line, he’s got a different idea. He takes the snap, secures the ball, and dives over the defensive line instead of plowing through it. Touchdown Derrick Henry.

To dive in Madden 22, hold the Square button (on PlayStation) or the X button on (Xbox) while sprinting forward with the ball. Sprinting with R2 (PS) or Right Trigger (Xbox) opens a wide variety of evasive movies, and one of them is diving.

Diving is risk-reward-based and should only be used when the game is on the line. Make sure to hold that dive button nice and tight. You don’t want to accidentally slide, costing your team valuable yards short of the mark. While sliding is often the safest bet, a fully extended dive could be the difference between touchdown and turnover. So, when and why should you dive in Madden 22?

The right and wrong time to dive in Madden 22

Vick Ballard, running back for the Indianapolis Colts in 2012, catches a short pass from QB Andrew Luck. It’s overtime, and Ballard knows that a touchdown wins the game for his team. He takes off running for the end zone, leaps into the air, and extends the ball over the goal line. The officials gather and declare it a winning score for the Colts.

Now, would the smarter move have been to run out of bounds where he took his leap? Perhaps, but that’s not to say a score was guaranteed, especially from inside the five against a tough Titans defense. In Madden 22, you should dive for the goal line in these make-or-break situations. Other than going for the touchdown, you can dive to secure the first down. However, be sure you’re diving into the open field and that no defenders are in your way. That being said, it’s better to pick up more yards in the open field, especially if a first down is well within reach.

Diving may save your skin at the end of the game, but it can also hurt you in the early stages, especially when it’s not necessary. In a rocky 2020 season for the New England Patriots, WR N’Keal Harry decided to dive for the goal line while the Pats were already leading against the Miami Dolphins. While airborne, Harry was hit by a defender and lost control of the football. The fumble went through the end zone, resulting in a touchback for the Miami Dolphins.

In this situation, Harry and Madden 22 players should have slid to the ground or run out of bounds to put their team in a better position to score. Now, Harry and the Pats come away with nothing instead of at least three points.

Other than gaining yards, players can also make celebratory dives into the end zone when there are no defenders in sight. Right before you cross the goal line, trigger a dive to either spread-eagle leap or spin like a corkscrew into the end zone.