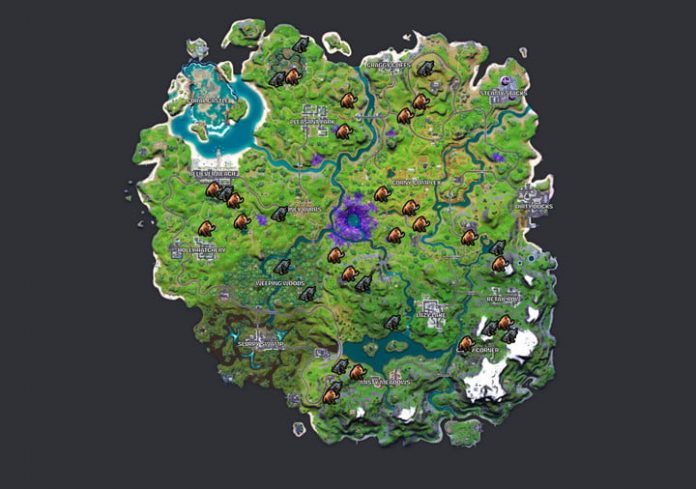 Fortnite  season 7, week 12 is here, and with it comes a new batch of challenges for you to check off your list. Though many of the new challenges are relatively straightforward, you might get tripped up on a handful of them, such as the one for hunting wildlife. Since this season has primarily shifted toward its alien theme, many players might’ve forgotten about the game’s wildlife. In addition, the creatures don’t seem to appear as much as they did in previous seasons. Because of that, finding some of these creatures can be tricky, but we’re here to help.

In this guide, we’ll show you everything you need to know about completing the latest challenge. Here’s how to hunt wildlife in Fortnite.

Where to find wildlife

Wildlife is all over the map in Fortnite. The main issue is that these creatures are easy to overlook, especially if you’re flying around in a saucer or taking on numerous enemies. The map above (courtesy of Fortnite.gg) shows the general locations of all wildlife. These include wolves, chickens, frogs, and boars that are infected by alien parasites. For the purposes of completing this challenge as easily as possible, we advise landing away from the center of  the map. If you stick to the outskirts, you’re less likely to run into another enemy player, which can make it much easier to complete the challenge.

The other important factor with this challenge is that the animals like to roam around. This means the map above isn’t exact but rather depicts their general locations. So, if you head to one of the spots that should have wildlife, be sure to search in a larger radius in case the creature has moved. We also recommend landing around an area that has loot so you can be prepared to take down the wildlife. We like Craggy Cliffs or Misty Meadows, but it’s up to you where you land.

How to hunt wildlife

After you’ve found the creature — either a boar, chicken, frog, or wolf — simply deal enough damage to eliminate it. For this challenge, you must take out five animals, but they don’t need to be within the same match. If you get eliminated before taking out five creatures, not to worry, as your progress carries over. Simply boot up another match and finish out the rest. Though, we do recommend attempting this in Team Rumble so you can respawn if you’re eliminated early.

Once you’ve taken out five animals, you’ll earn credit for completing the challenge, along with 30,000 XP. This is a great challenge to simply keep in the back of your mind as you play rather than going for it specifically, as the animals seem to be difficult to find when you’re looking for them — while they seem to pop up all the time if you aren’t seeking them out.