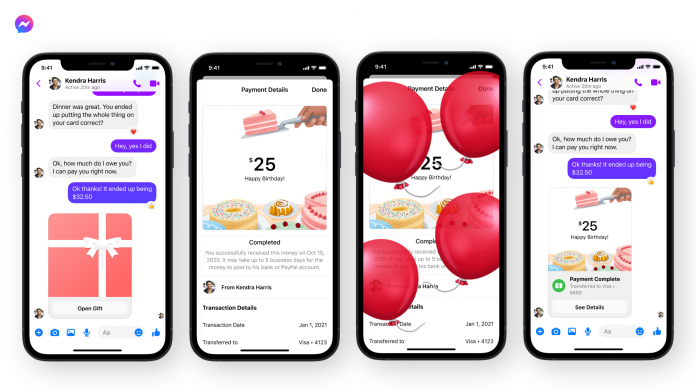 Facebook today announced updates coming to Facebook Messenger as the app and service celebrates its tenth birthday. The new features include a new game, tighter integration with Facebook Pay, message effects, and more.

For Messenger users in the United States, Messenger now allows you to receive cash gifts directly within the app. This is being enabled thanks to Facebook Pay, and when cash is received, it comes wrapped in a gift with virtual balloons.

In the US, we’re introducing a new way to receive cash gifts directly through Messenger. When a friend sends you a cash gift for your birthday, you’ll be notified on Messenger and Facebook with their gift message wrapped and accompanied by virtual balloons. Once you confirm your Facebook Pay details, the cash gift will be instantly deposited into your bank account. To send a birthday cash gift, go to the Facebook mobile app and tap the button that appears alongside your friend’s birthday posts in your Facebook News Feed or their profile.

Within the app, Messenger users will now be able to conduct polls within group chats, allowing groups to easily vote on specific topics and play “Most Likely to.”

In more celebratory features, Messenger is releasing a new “Messenger is 10!” sticker pack to users, offering fun effects such as purple balloons or candles. Announced previously, users can also utilize “Soundmoji” and message effects to spruce up their chats.

Smaller features include an updated way to share contacts with other friends and family, and a sneak peek at “Word Effects.” According to Messenger, Word Effects will be rolling out soon and will let users add specific emoji effects to specific words. Tag: Facebook Messenger
This article, “Facebook Messenger Celebrates Its 10th Birthday With Poll Games, Birthday Cash Gifting, and More” first appeared on MacRumors.com