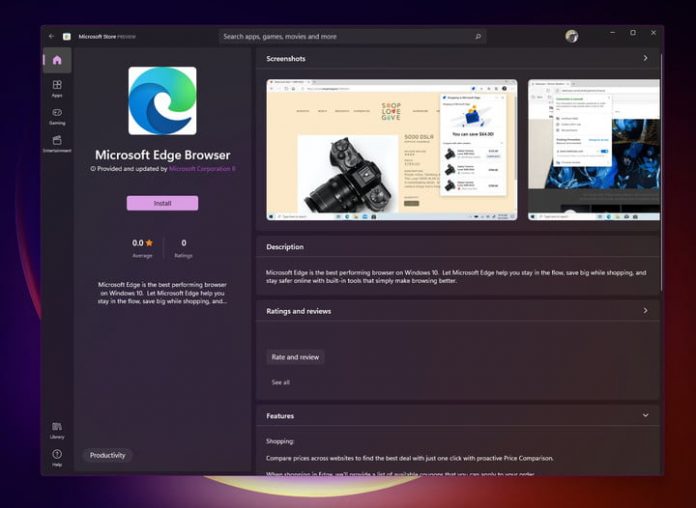 Microsoft is getting a bit more serious with the Microsoft Store in Windows 11. Now available in the newly redesigned store is the Microsoft Edge web browser marking a change from the past where the company’s flagship apps weren’t available in its own app store.

Although Microsoft Edge is already pre-installed in both Windows 11, there is an important milestone that Microsoft just hit with today’s news. Edge is now the first official Microsoft Win32 app that you can grab on Windows 11 via the Store. Previously, all of Microsoft’s apps in the store were either traditional Progressive Web Apps (PWAs) or Universal Windows Apps (UWPs.)

This availability shows that Microsoft is setting a standard and getting serious with making it easier for developers to download traditional programs on Windows 11. It also lives up to Microsoft’s promise of bringing more of its other Win32 apps to the store, like Microsoft Teams and Visual Studio (which have yet to arrive).

Installing this store version of Edge, however, won’t do much. Based on our tests, it will just re-download Edge and then open up and link you back to your current browsing section. This is because Edge is already pre-installed on Windows, without the need for a separate download. If anything, the listing just showcases how easy it is to discover Win32 apps. You’ll no longer have to open a web browser, and just begin your search right in the store itself.

Outside of Microsoft, other developers have already started uploading Win32 apps to the Microsoft Store in Windows 11. Previous examples include the popular streaming app OBS Studio, as well as Adobe’s popular PDF reader, Acrobat DC.

Microsoft is also working to bring Android app support to the Microsoft Store via the Amazon Appstore. The company has yet to ship this feature, but many Windows users are already anxious, thinking about sideloading otherwise incompatible apps.

You can find Microsoft Edge today in the Microsoft Store in Windows 11 today by searching for “Microsoft Edge Browser.” Interestingly enough, the app is published under the name “Microsoft Corporation II,” perhaps as a way to separate out Microsoft’s other listings and showcase the new Win32 apps from Microsoft.

Microsoft did not announce the availability of Edge in the store, so it’s likely this could just be a beta test for the moment.