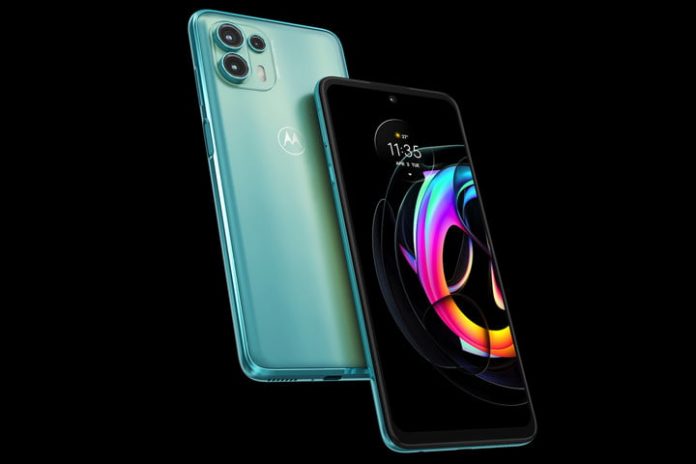 Motorola has announced three new smartphones, the Moto Edge 20 Lite, Moto Edge 20, and Moto Edge 20 Pro. Following on from last year’s Moto Edge and Moto Edge Plus models, all three feature large 6.7-inch OLED screens with HDR10+ support, plus 108-megapixel cameras, and 5G connectivity too. The processor and design all differ, but at its core, the Edge 20 series delivers three really important, desirable features regardless of how much you spend. Let’s take a closer look at the phones.

The entry-level version of the Edge 20 series is the Moto Edge 20 Lite, an 8.25mm thick phone with a plastic rear panel, and 2.5D glass over the 6.7-inch OLED screen, which also has a 90Hz refresh rate for smooth scrolling. Inside is a MediaTek Dimensity 720 processor with 6GB of RAM and 128GB storage space, plus a microSD card slot to boost it by 512GB.

The 108MP main camera is joined by an 8MP ultra-wide camera and a 2MP macro camera, while there’s a 32MP selfie camera on the front. There’s a fingerprint sensor in the power key, a 3.5mm headphone jack, dual-SIM 5G, NFC for Google Pay, and a choice between Graphite or Lagoon Teal colors. A 5,000mAh battery provides the energy, with Motorola’s 30W TurboPower fast charging system which will top the battery up to 50% in just under half an hour.

Motorola says the Moto Edge 20 is the thinnest 5G phone you can get at just 6.99mm, and the slim profile is emphasized by the clear camera module on the back. It’s light at just 163 grams too. The Moto Edge 20 has a metal chassis and Gorilla Glass 3 over the screen, but it’s still a plastic rear panel. The 6.7-inch OLED screen gets a 144Hz refresh rate here, and the processor inside the phone is a Qualcomm Snapdragon 778G, with either 6GB or 8GB of RAM. There’s a choice of 128GB or 256GB storage, but no microSD card support.

The 108MP camera gets a 3x optical zoom feature from an 8MP telephoto camera with optical image stabilization (OIS), plus there’s a 16MP ultra-wide camera too. The battery is smaller than the Moto Edge 20 Lite’s at 4,000mAh, but it still has the TurboPower 30 fast charging system. Other features include a 32MP selfie camera, dual-SIM 5G, NFC for Google Pay, an IP52 splash resistance rating, and a choice of three colors — Frosted Onyx, Frosted Emerald, and Frosted Pearl.

The top model in the Moto Edge 20 range is the Edge 20 Pro and it comes with either a glass rear panel, or one covered in vegan leather. Like the rest of the range, it’s a slim phone at 8mm, and the weight is kept sensible too, with the vegan leather version weighing 185 grams. This time it’s a Qualcomm Snapdragon 870 processor with either 6GB, 8GB, or 12GB of RAM, plus the option of 128GB or 256GB UFS 3.1 storage.

Once again it’s a 108MP camera on the back, this time with a 5x optical zoom feature from an 8MP telephoto camera with OIS, and there’s another 16MP ultra-wide camera. The Edge 20 Pro will shoot 8K video at 24fps, while the rest of the Edge 20 range shoots 4K video, plus it has a Dual Capture Video and Photo mode where the front and rear cameras capture images at the same time. It also comes with a dual 32MP and 16MP selfie camera system.

The battery capacity sits in the middle of the Edge 20 range with a 4,500mAh capacity, along with TurboPower 30 fast charging.  The feature list continues with a 6.7-inch OLED screen with a 144Hz refresh rate, an IP52 splash resistance rating, dual-SIM 5G, NFC, and the choice of a Midnight Sky or Iridescent Cloud glass-backed model, or the Indigo Vegan Leather model.

Facebook
Twitter
Pinterest
WhatsApp
Previous articleHurry! This ridiculous Dell gaming laptop deal is flying off the shelves!
Next articleNothing Ear 1 Review: Everything you could want, for just $99
- Advertisment -