Steve Jobs’ 1973 job application is now in an unusual auction 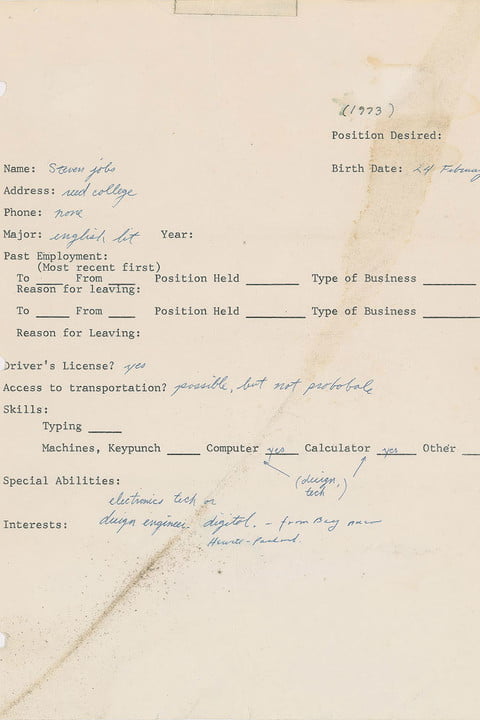 Even giants of the tech world had to start somewhere, evidenced by a job application (below) filled out by the late Apple chief Steve Jobs in 1973 at the tender age of 18.

The one-page document is currently in an auction that closes on Wednesday, July 28, with moneyed fans of the tech giant expected to bid big bucks for the unique artifact.

The position sought by Jobs isn’t shown on the handwritten application in which he lists “electronics tech” and “design engineer” as special abilities and interests, along with “computer” and “calculator” among his experience.

Also, the man that kicked off the smartphone industry 34 years later with the launch of the very first iPhone didn’t even have a phone number at the time, according to the form.

“The Steve Jobs Job Application from 1973 is a unique piece of history from the exact moment that a dreamer changed the world,” says the blurb on the auction page. “It’s a snapshot into the mind of a future genius at a moment where any small deviation from the path ahead would have meant a very different world today.”

Shaking things up a little this time around, the current owner of the document, Winthorpe Ventures, has decided to jump on the non-fungible token (NFT) bandwagon and offer it as a physical copy as well as an NFT, a kind of certificate that allows a person to take ownership of something digital. NFTs have gone mainstream in 2021, resulting in some crazy sales. Twitter founder and CEO Jack Dorsey, for example, recently sold an NFT representing his first tweet for around $2.5 million.

Winthorpe Ventures says it decided to offer the document in two formats in two separate auctions “to test the appetite for digital assets in contrast with physical equivalents.” It’s also another way for the seller to make a whole lot more money.

At the time of writing, the highest bid for the physical item is $16,000, way more than the NFT bid, which currently stands at just over $1,000.

A year after filling out the job application, Jobs joined Atari where he met Steve Wozniak. The two friends, along with tech businessman Ronald Wayne, founded Apple in 1976 before launching the company’s first successful personal computer, the Apple II, the following year. As you may know, Apple scored some even bigger hits after that …