Puzzle your way through crazy town in UnHoly Neighborhood for Android 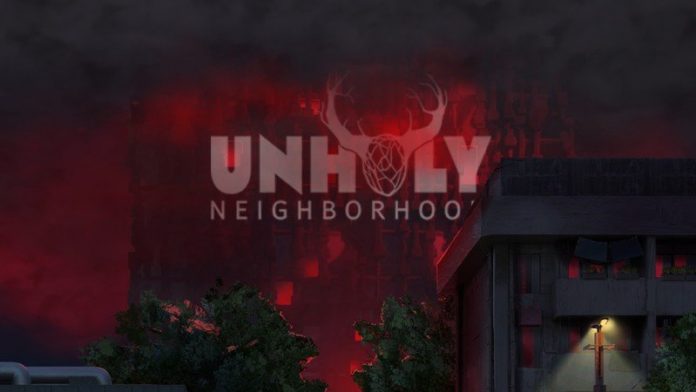 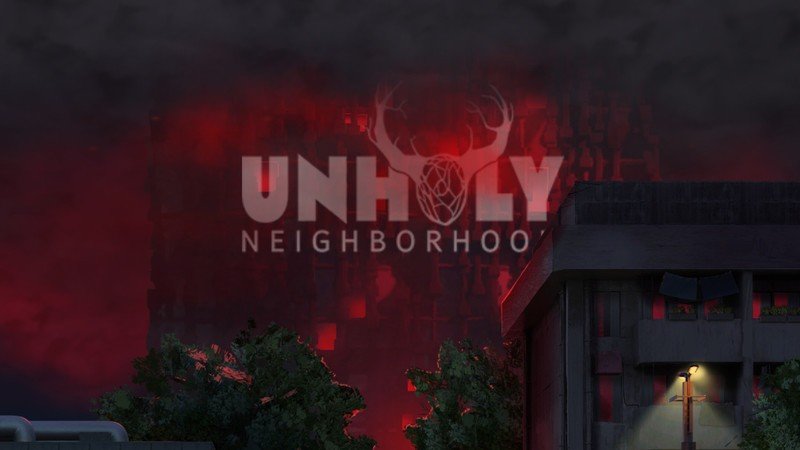 I love a good point-and-click adventure game. Thimbleweed Park scratched that itch for me, though it was honestly a bit too difficult for my soft, smooth brain to handle. So I decided to give fellow point-and-clicker Unholy Neighborhood a try, and I’ve been loving it so far.

A newer title released in May of this year, Unholy Neighborhood (listed as Unholy Adventure in the Google Play Store) is a rare example of a free, good quality game that isn’t drowning in ads or monetized to heck and back. The game’s description claims it has ads, but I played on BlueStacks Android Emulator and only ever got one “ad” that I can think of, a small pop-up asking me if I wanted to download another one of the developer’s games. After this experience, I just might do that, Dali Games.

Unholy Neighborhood opens with a cutscene that reminded me of The Purge, with a healthy dose of Eldritch horrors mixed in for good measure. A city’s sky turns red as seemingly mad hordes of people (or perhaps demons?) clad in animal heads roam the streets below, wreaking havoc. A hapless observer watches the scene unfold in terror, not realizing that an unknown monstrosity is sneaking up behind him, ready to claim a new victim.

Peter Grim, a seemingly ordinary man, must navigate a city in turmoil to track down his missing wife.

Smash cut to a standard, boring apartment in what would appear to be the late 70s or early 80s. A perfectly ordinary looking man, Peter Grim, stands in his living room surrounded by hideous yellow wallpaper, matching yellow carpet, an old CRT TV in a wooden case, and an original Atari game console, among other things. The local news has been hyping up an oncoming storm for nearly a month and now it’s finally starting to hit the city. Red lightning streaks through the dark clouds and Peter realizes he doesn’t know where his wife is and he can’t seem to get ahold of her. 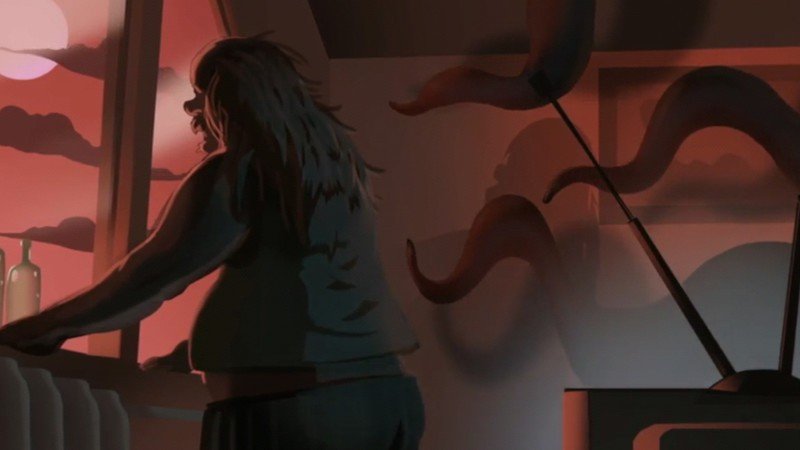 Thus begins Peter’s quest to track down his missing wife. Did she disappear of her accord? Was she kidnapped? Did she just get trapped out in the city during this wild storm that appears to be driving the entire populace mad? These are the questions you’ll attempt to answer as you head out on the town to find Betty and bring her back home safely.

Laid out like a relatively traditional point-and-click adventure game, Unholy Neighborhood doesn’t ask much of the player from a mechanical standpoint. You simply click toward the left or right to move Peter around; as you do so, icons will appear over nearby objects or people that you can interact with. Hand icons indicate objects you can pick up, text boxes for people you can chat up, and magnifying glasses for things that will require a bit more work to figure out.

Enter the game’s primary focus, the storyline puzzles. Baked right into the progression system, you’ll have to solve hundreds of puzzles to make it to the end of this twisting, turning narrative. In stark contrast to classic revivalist Thimbleweed Park, these puzzles are quite a bit easier and tend to remain contained within their specific area rather than spanning multiple characters or locations. 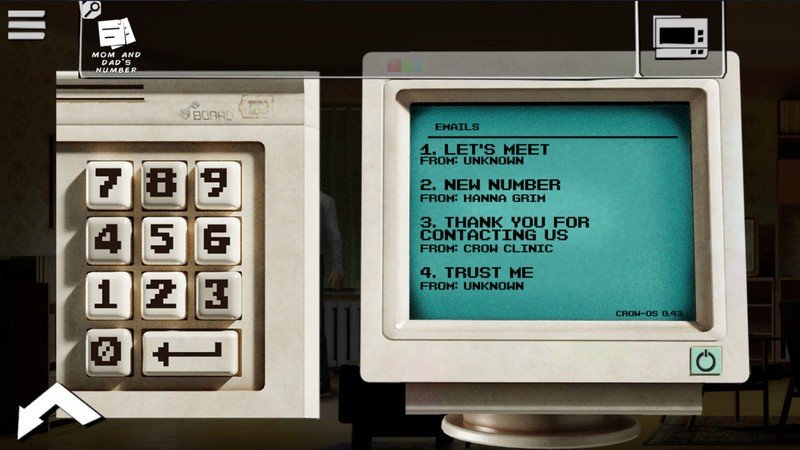 For example, you may need to hack into your wife’s emails to try and find out where she went, but you can’t remember her password. Well, first you have to find the cable to even plug the computer in, because it’s been hidden. Once you’ve done that, you’ll have to puzzle out the password by playing a game of Pong on your Atari, which of course you have to fix first before you can even play. Then, assuming you win a game of Pong, you’ll find your wife’s nickname in her high score ranking. THEN, using her nickname, you’ll compare that to a cipher to determine which letters correspond to which numbers to generate the actual password to get into your wife’s account.

Find objects, to solve puzzles, to find more objects to solve more puzzles! It’s not revolutionary, but it IS fun.

This cycle of finding objects to complete puzzles, which reveals more objects that’ll help solve more puzzles, isn’t revolutionary by any means. But I personally found it charming and the gameplay loop in Unholy Neighborhood is, overall, quite satisfying. You may occasionally find yourself a bit stumped; when that happens, the game has a handy built-in hint system where you check a pager for clues. These hints often gave the whole puzzle away though, so I tried to steer clear of them to keep at least some level of challenge in the game.

There are a few things I wasn’t too jazzed about in this otherwise engaging title. One, I’ll admit that once you get into the flow of the game, the puzzles can start to become a little too easy. Two, although the graphics are perfectly decent for a mobile title, I wouldn’t personally describe the art style as especially pleasing. I might even go so far as to say that the character models and portraits are actually kind of ugly. My last point of contention is that the game features a small amount of voiced dialogue, usually just the first couple of lines from any given character, and this voice acting is not particularly good. It’s fine, but the delivery came across as cold, bland, or goofy more often than not. 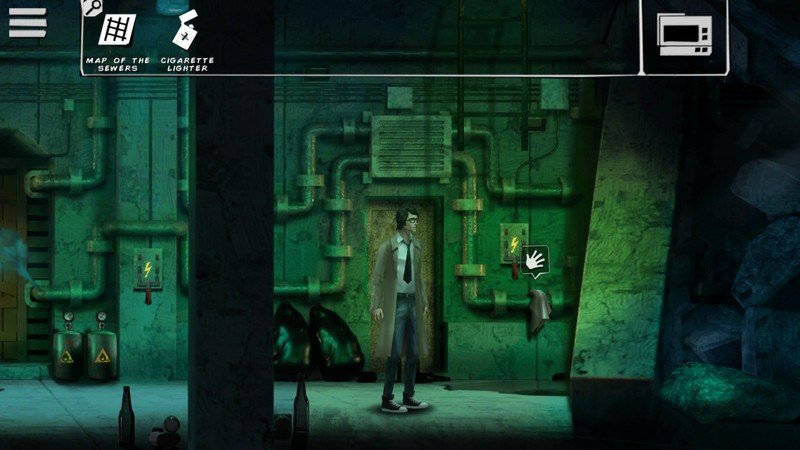 That being said, none of these issues were enough to stop me from playing, largely because I found the game’s atmosphere and story interesting enough to keep going. I won’t give too much away, but there are eventually some hints towards a possible Rosemary’s Baby-esque situation, combined with an unsettling setting that appears to be based in an alternate reality that smacks pretty hard of Orwell’s 1984 at times. Government propaganda, surveillance, and mistrust among the citizens float just beneath the surface of the story, adding up to a relatively unique experience in spite of the famous sources that the developers may have drawn inspiration from.

The story also starts to get seriously weird later down the line, so strap in, suspend some disbelief, and get ready for a few very odd scenarios to unfold. Like I said, Unholy Neighborhood is completely free, with mostly non-intrusive ads and no in-app purchases. It’s honestly a great value for the quality, with minor flaws that can be easily overlooked, and I would recommend that point-and-click adventure lovers give it a try! 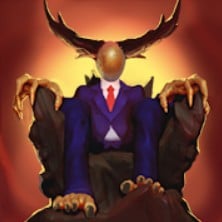 A point-and-click adventure that takes you through a horrific city filled with unknowable terrors. Puzzle your way through to rescue your wife in UnHoly Neighborhood!