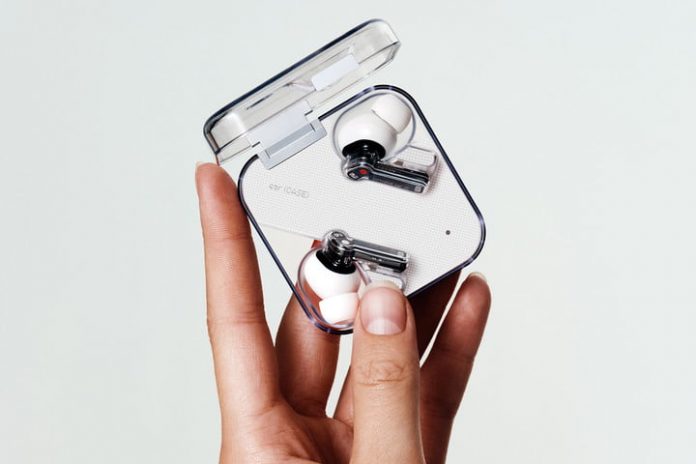 After months of teasing and a near-constant drip-feed of information, Nothing has fully announced the Ear 1 true wireless earbuds, and they’re visually unlike any we’ve seen before. Anticipation has been high due to Nothing being the new tech company formed by Carl Pei, co-founder of OnePlus, after he left the smartphone maker in October 2020, along with the release of some very intriguing concept images revealed early on.

The Ear 1 are not designed like your usual, boring true wireless earbuds. The stems are transparent, revealing the circuit board, magnets, and microphones inside, along with delicate, pixel-art style branding, plus a cute red dot to differentiate the right-hand earbud. They’re attached to a white oval body that houses an 11.6mm driver. The sound has been tuned by Teenage Engineering, a company with considerable experience in audio products, for balanced bass, mids, and treble.

The case is also transparent with a white central section housing all the components, and an unusual “fish-eye” indentation to keep the earbuds from moving around should they break free from the magnets. The entire package looks stylish, unusual, and really eye-catching. It’s a very different look to the usual black or white cases and buds we’re used to seeing, especially when you find out how much the Nothing Ear 1 cost.

Weighing just 4.7 grams — an individual Apple Airpods Pro earbud weighs 5.4 grams, for comparison — they connect to your phone using Bluetooth 5.2 and feature three different active noise cancelation (ANC) stages. A Light setting minimizes ambient noise, while the Maximum setting is ready for more noisy environments, and there’s a Transparency mode to allow noise from around you back in. It’s all enabled by three microphones.

Nothing says the battery will last for five to seven hours on a single charge, with 34 hours in total from the case. It’s not clear whether these figures are based on using ANC or not. The case can be charged using a USB Type-C cable or wirelessly using a Qi charger, and it has a fast-charging system too. Nothing says that after 10 minutes the case will have enough power to charge the earbuds for eight hours of total use. An app allows you to control the earbuds, view charge status, activate in-ear detection, and there’s fast pairing — open the case, press the Pair button, and that’s it — for Android phones. The Ear 1 have an IPX4 rating and are splash and water resistant.

How much will you pay for these very attractive true wireless earbuds with ANC? The Nothing Ear 1 cost an extremely reasonable $99, or 99 British pounds. We rate the Google Pixel Buds A highly, which also cost $99, but they do not have ANC. The Apple Airpods Pro are $250, and our pick for the best ANC true wireless earbuds, the Bose QuietComfort Earbuds, are $279. For the design and features on offer, the Ear 1 are shaping up to be a great value.

You’ll be able to buy the Ear 1 on July 31 through Nothing’s own online store, but it’s going to be a limited run, and if you miss them you’ll have to wait until August 17 for a wider release.