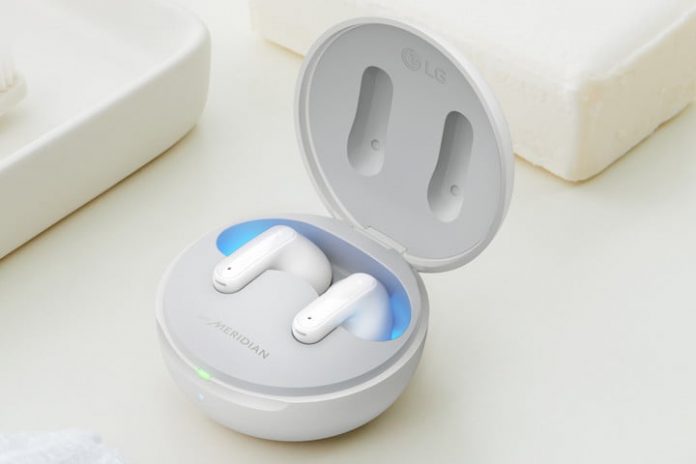 LG’s just announced its 2021 updates to its Tone Free line of true wireless earbuds. The FP series, which includes the FP5, FP8, and FP9, will be available later this month. Along with the return of features from the 2020 FN series like active noise cancellation (ANC) and a charging case that uses UV light to sterilize the earbuds after use, the FP series gets three new features: You can use the charging case as a Bluetooth wireless transmitter (FP9 only), the right earbud can be used as a handheld microphone for times when you want extra privacy, or there’s too much noise nearby, and Headphone Spatial Processing from Meridian Audio.

The FP9 and FP8 are available in Charcoal Black, Pearl White, or Haze Gold. They boast LG’s auto-cleaning UVnano charging case, which LG claims has been proven to reduce bacteria on the earbuds’ speaker mesh by 99.9% in five minutes when the case is charging.  The one feature the FP9 lack, oddly, is wireless charging, which is only available on the FP8.

The FP9’s major distinction from the rest of the Tone Free lineup is its “Plug & Wireless” capability. The earbuds come with a USB-C to AUX cable, which connects the charging case to any analog source of audio. The case can then retransmit that audio over Bluetooth to the FP9 earbuds. LG hasn’t indicated what kind of toll that feature takes on the charging case’s battery life. We saw this feature show up earlier this year on the Bowers & Wilkins PI7 true wireless earbuds.

And while that ability may not be original, we’ve never seen LG’s “Whispering Mode” before, which lets you hold the right earbud close to your mouth as a dedicated microphone. Typically, true wireless earbuds don’t deal well with noisy environments when making calls. The microphones are simply too far from your mouth to be super effective. If Whispering Mode proves useful, I can see it showing up as a standard feature across the industry.

For both the FP9 and FP8, you get a claimed 10 hours per charge when ANC is turned off, and a total of 24 hours of use when you include the charging case. A five-minute quick charge will get you an extra hour of listening time. The earbuds are rated IPX4 for water resistance, which should help them deal with sweat and rain, while the ear tips are made from medical-grade, hypoallergenic silicone.

We’re curious about the new Headphone Spatial Processing from Meridian Audio that LG has added to the 2021 Tone Free models. LG describes it as enveloping the listener with a sound that seems to originate from all directions. Along with spatial processing is a similar-sounding feature called 3D Sound Stage, which purportedly expands the sound stage via spatial up-mixing to bring users more lifelike audio.

LG hasn’t indicated how much the new Tone Free models will cost or when they’ll hit U.S. stores, saying only that both will be announced at a later date.