HomeHow toHow to buy a graphics card in 2021
How to 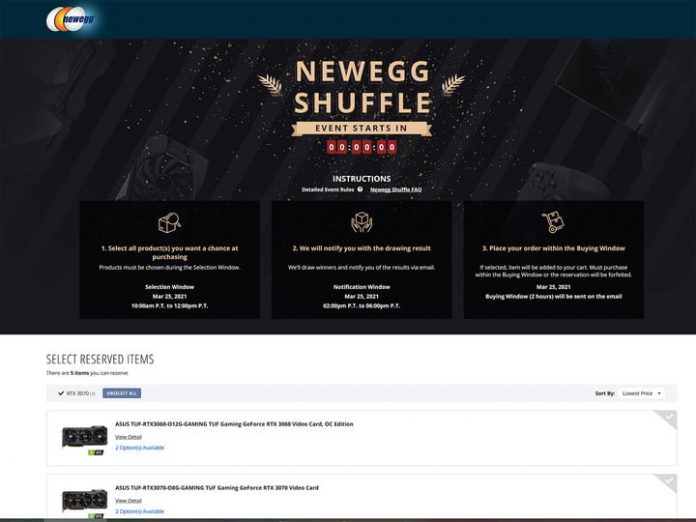 The best graphics cards have been almost impossible to find for nearly a year, but things are starting to improve. Stock is improving at retailers, and although prices are still high, they’re starting to drop. For everyone who has been patiently waiting — and doesn’t want to wait anymore –we’re going to show you how to buy a graphics card.

It is important to note that prices are still much higher than they should be, and that’s true across retailers. We have three methods that will help you score a card as close to list price as possible, but it’s next to impossible at the moment to buy a card at list price.

If you want to score a new graphics card as close to list price as possible, there are three options: Newegg Shuffle, EVGA’s queue system, and in-store at Micro Center. It’s possible to get a graphics card through all three methods, but your mileage will vary based on where you’re located, how much money you’re willing to spend, and how diligent you are with finding a new card.

Newegg Shuffle is probably the most popular way to get a new graphics card. Shuffle is a raffle that runs every day on Newegg’s website. Each day, Newegg selects a list of high-demand products — mostly graphics cards, but occasionally processors and consoles, too — that users can select for a chance to purchase. After the raffle closes, Newegg draws winners and gives them a small window of time to log in and check out.

It isn’t a perfect system, though. On average, around 100,000 people enter each shuffle, so you could enter every day for months and still not get selected. It’s a raffle, after all, so there’s an element of luck. In addition, Newegg often bundles cards with other components that you may not need, like a power supply or a motherboard. You can’t return the bundled item separately, so you’ll either need to sell it yourself or eat the extra cost.

The EVGA queue system is more forgiving. Instead of a raffle, EVGA allows users to purchase cards on a first-come, first-served basis as stock becomes available. Unlike Newegg Shuffle and the many other methods of purchasing a graphics card, EVGA sells its cards at list price. Yes, you can purchase an RTX 3080 for $699.

However, it’s entirely dependent on when EVGA has new stock available. Instead of an overall raffle, you have to choose each individual model you want to purchase and be ready to buy when your name comes up.

Method 2: Use a stock tracker

If you want to white-knuckle your way to a new graphics card, you can use a stock tracker. There are several stock trackers available through YouTube live streams, Discord servers, and browser extensions, but they all do the same thing: Constantly check if graphics cards are in stock across retailers.

User fixitfixitfixit has been running a live stream across YouTube and Twitch for the past several months, and there’s a Discord server attached to the streams, as well. It tracks inventory for AMD and Nvidia graphics cards across Amazon, Newegg, Best Buy, and Antonline, as well as several other retailers (including Office Depot and B&H Photo).

In addition, there are stock-tracking extensions like Distill and HotStock that can check for you. Both have free and paid tiers depending on how often you want to check websites and how many products you want to monitor. It’s possible that retailers will ban you for using these tools, though. Users report accounts being shut down on Newegg and Best Buy thanks to the anti-bot measures in place at those retailers.

If you want to use this method, we’d recommend following a stock-tracking account on Twitter. That way, you don’t need to constantly monitor a live stream or run the risk of having your account banned. Accounts like @stock_drops and @LeBlarstOfTimes tweet out when new cards become available. Follow these accounts and similar ones, and make sure to turn on tweet notifications. If you do that, you’ll only need to check when you get a notification.

Method 3: Buy a pre-built or a gaming laptop

If you need more than a graphics card, or even a full system, you’re in luck. You can pick up a pre-built system or a gaming laptop at a reasonable price. Keep in mind that pre-built systems are more expensive than buying components individually, so the final price is reflective of the high cost of graphics cards right now.

There are numerous options for pre-built desktops. HP, Dell, Origin PC, and Falcon Northwest top the list of the best gaming desktops, but there are dozens of builders with a slew of unique options. The benefit of going with a pre-built PC is that you can customize your build beyond what you might be comfortable doing. There are options like the HP Omen 30L that include off-the-shelf parts that are easily upgradeable, as well as machines like the Maingear Rush, which includes a custom water-cooling loop.

If you don’t need the extra parts, you can buy a pre-built, swap out the graphics card, and resell it as a unit. You can also part it out and sell everything individually. Although it’s a hassle to get rid of the extra parts if you only need a graphics card, going this route can save you some money depending on how your system is configured.

The other option is a gaming laptop. The GPU pricing crisis has only really impacted full-size graphics cards. Popular gaming laptops with recent mobile cards, like the Razer Blade 14, are still priced in accordance with the rest of the laptop market. The obvious downside of this route is that you can’t pull out the graphics card and put it in another machine, as well as the normal heat and noise issues that come with most gaming laptops.

Method 4: Buy secondhand (but be careful)

Finally, you can buy a card secondhand. This is a good option if you want to score a card below the price at retailers, especially as scalpers level off and secondhand prices continue to drop. You have to be careful when shopping on the secondhand market, though.

Cryptocurrency miners often sell off their GPUs after they’ve been used for mining. Since they’re cards that are operating at full capacity for 24 hours a day, seven days a week, you might be picking up a unit that’s on its last leg. There’s no way of knowing if you’re buying from a miner or not, so you’ll have to do your secondhand due diligence. If you look at ratings and other listings the seller has, it’s usually easy to deduce if they’re a builder selling off an old GPU or a miner offloading dozens of cards.

eBay is the best place to gauge what price GPUs are selling for, but you’ll find them on Craigslist, Facebook Marketplace, and Mercari, too. Regardless of the platform, pay careful attention to the listing name and description. Since the start of the GPU shortage, sellers have popped up selling pictures of graphics cards, not the cards themselves. Although mostly just a joke, it’s not hard imagining someone buying something like this thinking they’re scoring a good deal on a graphics card.