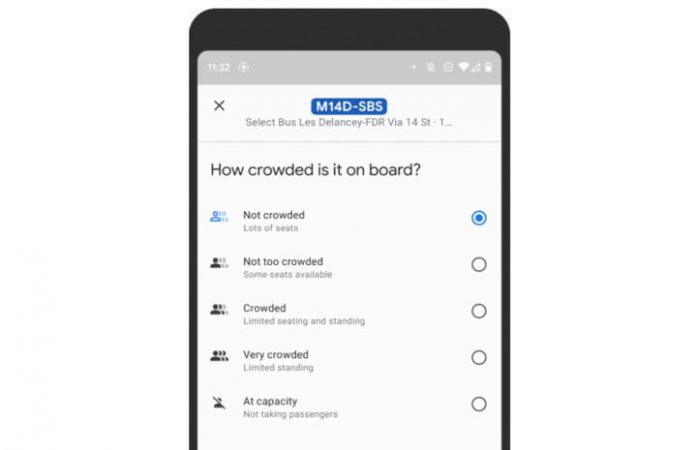 Google Maps has announced a significant expansion of a handy feature that lets you see how crowded your train or bus is likely to be when it arrives.

After launching the feature in 200 cities in June 2019, the web giant is this week rolling it out to 10,000 transit agencies in 100 countries. If available, the data will appear when you look up transit directions.

It’s never any fun having to squeeze onto a packed train or bus, even more so since the start of the pandemic when social distancing became a thing. If you can find out beforehand if your subway or bus line is particularly busy and you’re not in a rush, you can hold back and perhaps run some outstanding errands or simply go and relax somewhere.

“These predictions are made possible through our artificial intelligence technology, contributions from people using Google Maps, and historical location trends that predict future crowdedness levels for transit lines all over the world,” Google Maps’ Eric Tholomé said in a post announcing the expansion, adding that for privacy the feature uses anonymization technology and various privacy techniques to ensure that your data remains secure and private.

As part of efforts to make the transit data even more useful for passengers, Tholomé said his team is currently piloting the ability to see real-time crowdedness information “right down to the transit car level.” The tests for this particular feature are taking place on the Long Island Rail Road in New York and on transit services in Sydney, Australia, with special software used to interpret data gathered from weight sensors built into cars’ suspension systems.

Other new features announced by Tholomé include a new Timeline Insights tab, initially for Android only (with location history enabled), that shows you monthly trends about how you’re spending your time out and about. Accessible via a new tab in your Timeline (tap on your profile photo, then Your Timeline), the surfaced data will show you things like the kinds of transport you’ve used, along with distances covered and the distance and time you’ve driven, flown, biked, or walked. “You can also see how much time you’re spending at different places — like shops, airports, and restaurants — and instantly drill down to see all the places you visited,” Tholomé said.

Finally, a new Trips feature in the Timeline tab lets you surface data linked to past vacations, “like which hotels you stayed at during that epic trip to Tokyo or the restaurants you visited on your weekend getaway.”

We should point out that if you’re starting to feel spooked by the extent to which Google can track your daily activities, here’s how to disable its location history feature and also how to disable location services on Android and iPhone.