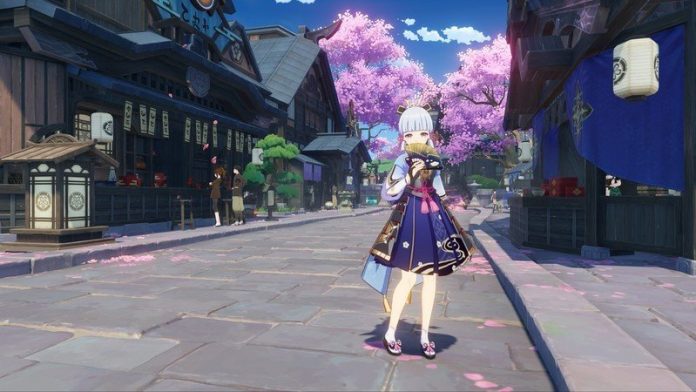 Mihoyo just announced it’s releasing a massive update Genshin Impact on July 21 — the 2.0 update, also called “The Immovable God and the Eternal Euthymia.” This new update will add a new island city, Inazuma, as well as new characters and several new practical features. Players will soon have the ability to save their progress across multiple platforms.

Judging from the trailer, Inazuma is obviously inspired by Japan, with very Japanese architecture and art, with cherry blossoms filling every corner of the screen. It consists of a series of six islands, and is ruled by the Electric Archon. According to Mihoyo, players can expect to find” completely different cultures, creatures, and mysteries” in the archipelago, as well as new boss enemies and loot.

Along with the new region, the 2.0 update adds three new playable characters: Kamisato Ayaka, a five-star Cryo sword user who’s been featured in closed beta testing; Yoimiya, a five star Pyro archer and fireworks expert; and Sayu, a four-star ninja who wields a sword bigger than she is. There will also be several new NPCs in Inazuma with whom characters can interact.

A new and important addition to the game is cross-progression between the PS5, PS4, PC, Android, and iOS platforms, meaning you’ll be able to save their progress across multiple devices. While there’s no update on whether the game will come to the Xbox and Switch platforms in the future, this new update means that, if it does, players probably won’t have to start from scratch on them. Mihoyo’s also adding support for haptic feedback on the PS5. The update launches on July 21 for all platforms.

Facebook
Twitter
Pinterest
WhatsApp
Previous articleNew WhatsApp feature spotted that lets you choose image quality
Next articleBest Pixel 4a Deals of July 2021: Up to $200 off Pixel 4a 5G and more
- Advertisment -

These are our favorite Philips Hue lighting solutions