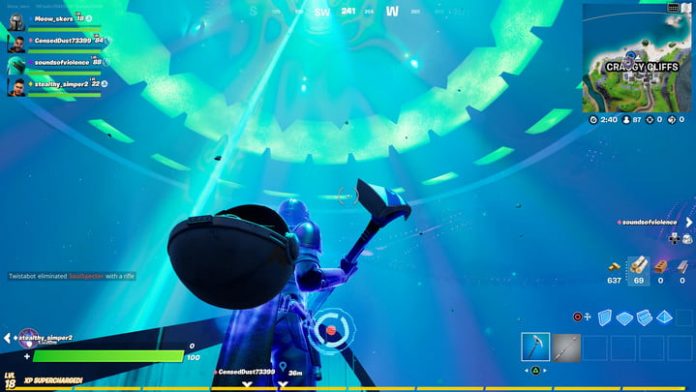 It’s a new week, which means the next list of Fortnite challenges is here for you to complete. This week’s challenges might cause a little trouble since they send you to specific, unmarked locations on the map. But fortunately, most of them can be completed fairly quickly if you know where to go. One that might cause you some trouble requires you to deploy alien nanites anywhere other than Holly Hatchery.

How to get alien nanites

This is one of the most complicated challenges in recent memory, simply due to the number of steps required to make it work. Your first step is to get abducted by one of the massive ships around the map. Typically, they spawn in threes and appear at random locations. Make sure to open your map before dropping to see where they are (they’re indicated by a saucer icon).

Once you’ve found one, make your way to one, land on the ground below, and take refuge in a nearby house. Make sure you loot up because these areas will typically be busy with other people looking to complete the challenge. Eventually, the ship will begin abducting you, but it takes a while for it to finalize. It takes around 20 seconds (possibly more) before you’re completely abducted, so be patient and make sure someone doesn’t take you out before you get sucked into the ship.

Once you’re in, you’ll be taken into a small room with other players. Eventually, you’ll be let out and you’ll find yourself in a massive area with different “islands” that you can jump to. This low-gravity area is home to a minigame that requires you to collect gold orbs (or wait out the timer). Do your best to collect five orbs before the other team to finish things up quickly. After the minigame is over, you’ll be transferred to a room with tons of large chests, and here is where you’ll have an opportunity to collect alien nanite.

Go around the room opening all the chests you come across and you’ll find high-level weapons, along with tons of loot. Be on the lookout for alien nanites, which are small cube-like items that can be thrown. To complete the challenge, you need to deploy three of them, so continue looting in this room to find as many nanites as you can. You’re on a timer, so it’s highly likely you won’t be able to gather three before you get kicked out, but do your best.

Where to deploy alien nanites

After the timer counts down to zero, you’ll be kicked out and returned back to the regular map, so glide down like normal until you reach the ground. Here, you can throw your alien nanites wherever you’d like — just make sure you aren’t at Holly Hatchery, as the challenge description states. Essentially, these alien nanites grant you low-gravity features within the parameters of the box, just like at Holly Hatchery.

All you have to do is throw one down and the game should give you credit. But keep in mind, you need to deploy three, so you might have some trouble if you weren’t able to collect the amount needed from the mothership. Either way, if you only managed to get one or two, you can repeat the steps from above to gather the remaining nanites in a separate match. It’s a long and arduous process since it’s easy to get taken out while you wait to be abducted, but with a little luck, you’ll be sucked into the mothership with few problems.

From there, you just need to hope you get lucky with alien nanite drop rates from the crates after the minigame. It’s unclear what the drop rate is, but when we tried it, we only received one, so we had to repeat the process to gather the rest. Some players have reported getting more than one, so it could very well only take you one try.