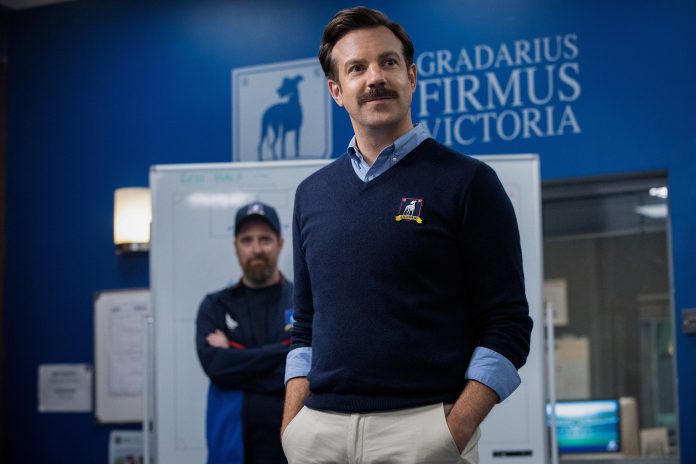 Ted Lasso sees Jason Sudeikis reviving his “Ted Lasso” character that first debuted during the 2013 NBC Sports English Premier League coverage. In the ‌Apple TV+‌ show, Sudeikis plays a small-time college football coach from Kansas who is hired to coach a professional soccer team in England, despite having no experience coaching soccer.

The second season has been widely anticipated and was promoted by Apple CEO Tim Cook during the company’s April event. The show regularly takes pride of place at the top of Apple’s official ‌‌Apple TV+‌‌ website, and also has a line of official merchandise associated with it.

For its first season, “Ted Lasso” received a record-breaking 20 Emmy nominations, the most of any comedy in its first season. It also won multiple awards, including a Golden Globe for Jason Sudeikis, who plays the show’s namesake main character.

The second season of the show, which consists of 12 episodes, sees Sarah Niles joining the cast. New episodes will be released every Friday on ‌‌‌‌Apple TV+‌‌‌‌. Apple has already renewed the show for a third season, which the creators of the show have hinted may be its last.Tags: Apple TV Shows, Apple TV Plus
This article, “First Episode of ‘Ted Lasso’ Season 2 Debuts on Apple TV+” first appeared on MacRumors.com