HomeNewsFacebook Gaming Now Available to iOS Users Through Web App Due to...
News 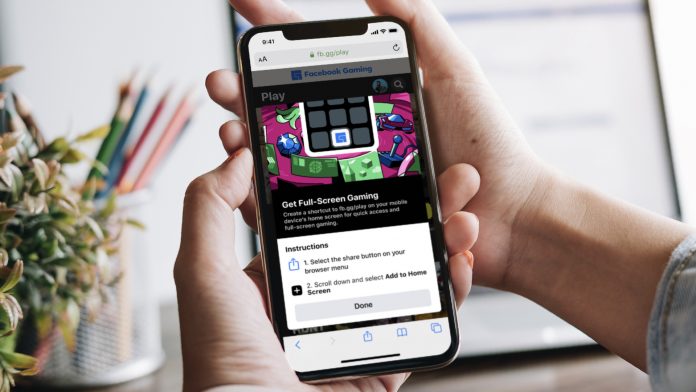 Due to limitations surrounding the distribution of cloud gaming services on the App Store, Facebook is bringing its gaming service to iOS users through a progressive web app starting today, reports The Verge.

Apple’s ‌App Store‌ guidelines don’t permit cloud-game-based apps to appear on the platform unless developers submit each app offered in the service individually for review. The limitation has been a significant point of contention between Apple and Facebook, and Microsoft, which both have cloud-game services.

In a statement to The Verge, Facebook’s vice president of gaming, Vivek Sharma, said that the company has come to the same conclusion as others, such as Microsoft, that bringing cloud games to iOS users through a web app is the only possible way. The vice president also criticized Apple’s guidelines, saying it “defeats the purpose of cloud gaming.”

“We’ve come to the same conclusion as others: web apps are the only option for streaming cloud games on iOS at the moment,” Facebook’s vice president of gaming, Vivek Sharma, told The Verge in a statement. “As many have pointed out, Apple’s policy to ‘allow’ cloud games on the App Store doesn’t allow for much at all. Apple’s requirement for each cloud game to have its own page, go through review, and appear in search listings defeats the purpose of cloud gaming. These roadblocks mean players are prevented from discovering new games, playing cross-device, and accessing high-quality games instantly in native iOS apps — even for those who aren’t using the latest and most expensive devices.”

Earlier in June, Microsoft made Xbox Cloud Gaming available to iOS users through Safari. Compared to normal apps available to download through the ‌App Store‌, web apps are severely limited in functionality, not being able to send user notifications, take advantage of a device’s hardware, and are harder to find for users. Tag: Facebook
This article, “Facebook Gaming Now Available to iOS Users Through Web App Due to App Store Policy” first appeared on MacRumors.com