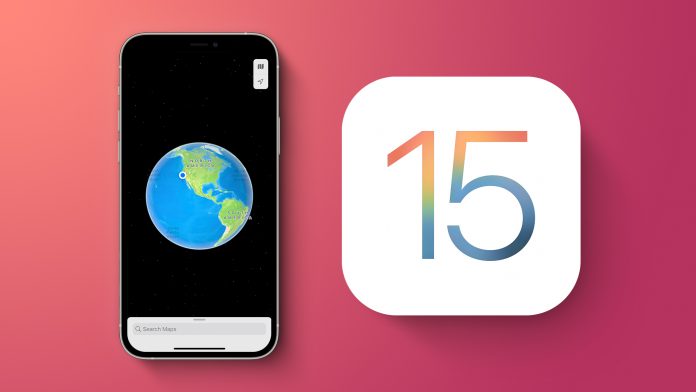 Apple has made so many improvements to the Maps app in iOS 15 that it’s almost an entirely different experience. There are better driving directions, improved transit directions, and more immersive AR-based walking directions.

The Maps design has once again been updated, and you can see everything at an incredible level of detail that wasn’t available before, especially in cities and in places where there was no detail before. This guide walks through all of the changes that have been introduced in the Maps app in ‌iOS 15‌.

When using Maps for driving directions, more detailed road information is available. Maps will make turn lanes, crosswalks, and bike lanes clear so you know where you’re supposed to be.

If there’s a complex interchange that needs to be navigated, Maps will shift over into a street-level perspective to cut down on the confusion. All of this is included on the dedicated driving map, which also highlights current traffic incidents and conditions like road closures so you know what to expect on your route. 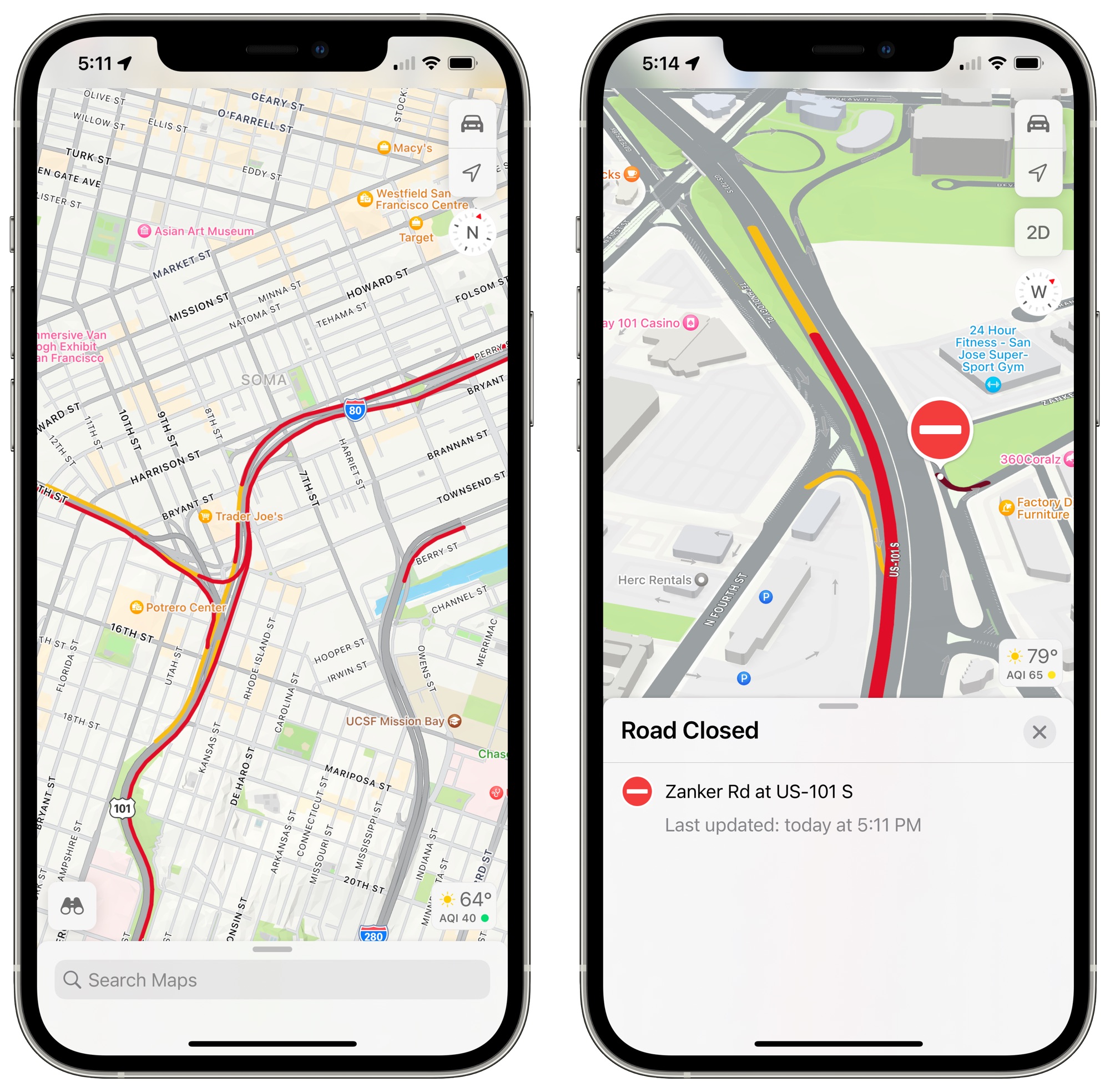 Maps in ‌iOS 15‌ has Explore, Driving, Transit, and Satellite maps to choose from, and it’s the driving map that’s the new addition. There is a new interface for picking a map, with previews of what each map looks like.

Maps in ‌iOS 15‌ is more detailed in all locations, but in select cities, Apple has upped the detail even further. Roads, neighborhoods, trees, and buildings are shown in full detail, and there are 3D representations of landmarks like the Golden Gate Bridge. 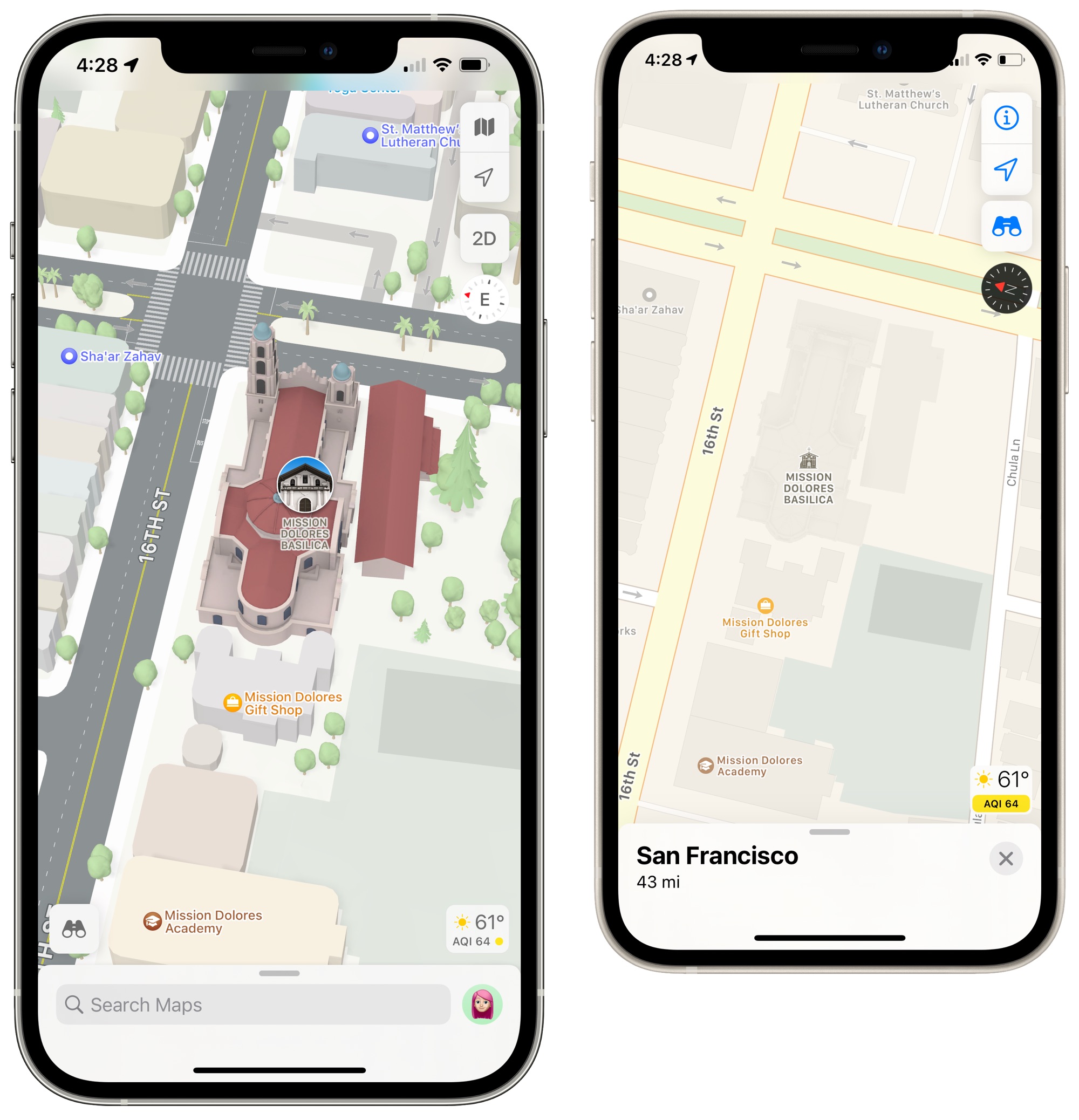 ‌iOS 15‌ left, iOS 14 right
Cities with 3D landmarks and high levels of detail include San Francisco, Los Angeles, New York, and London. Apple has also rendered its Infinite Loop and Apple Park campuses in 3D, and this is a feature that will expand to additional cities in the future. 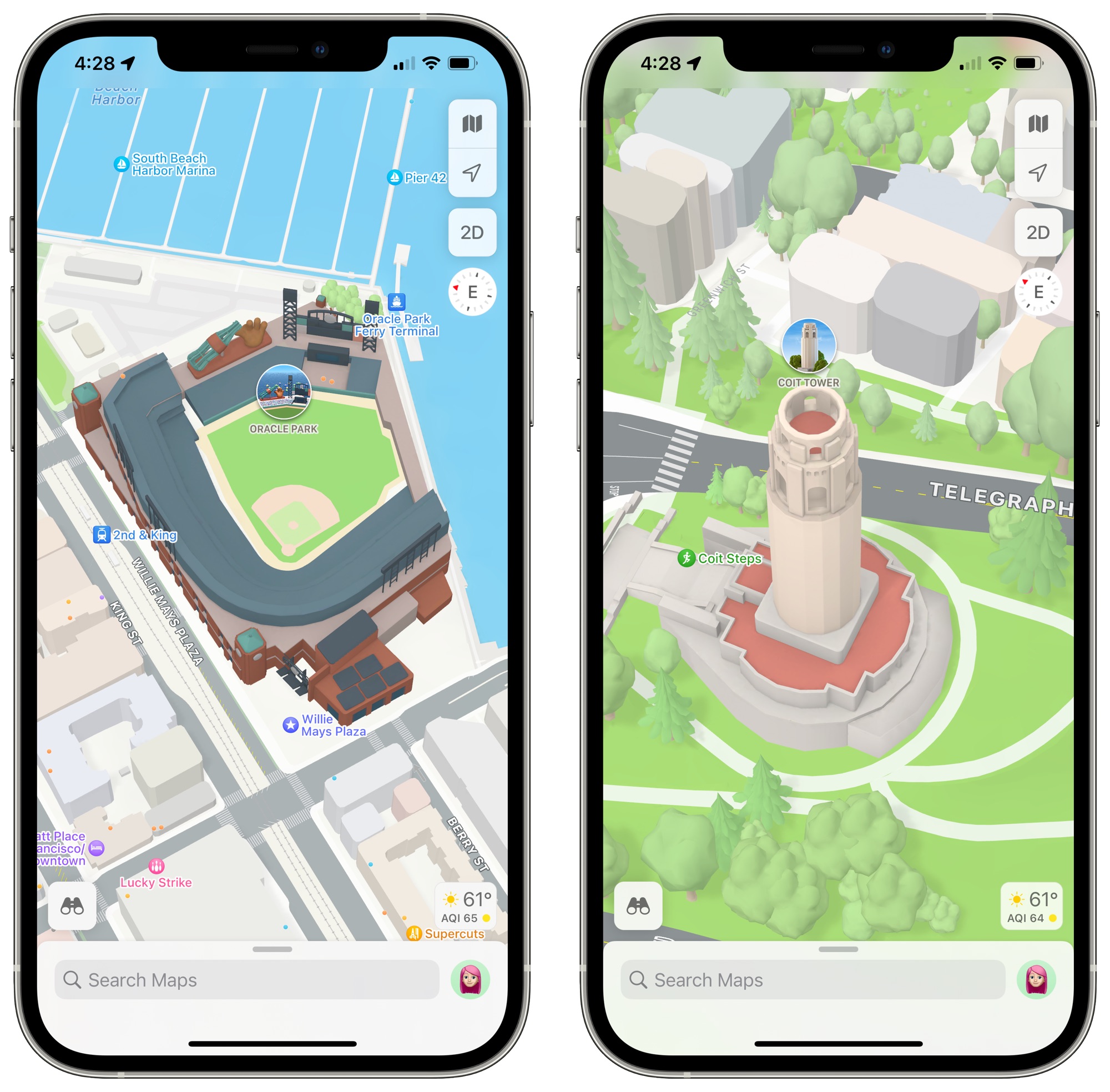 Apple has also updated the Apple Maps night/dark mode with new colors and a fresh look. 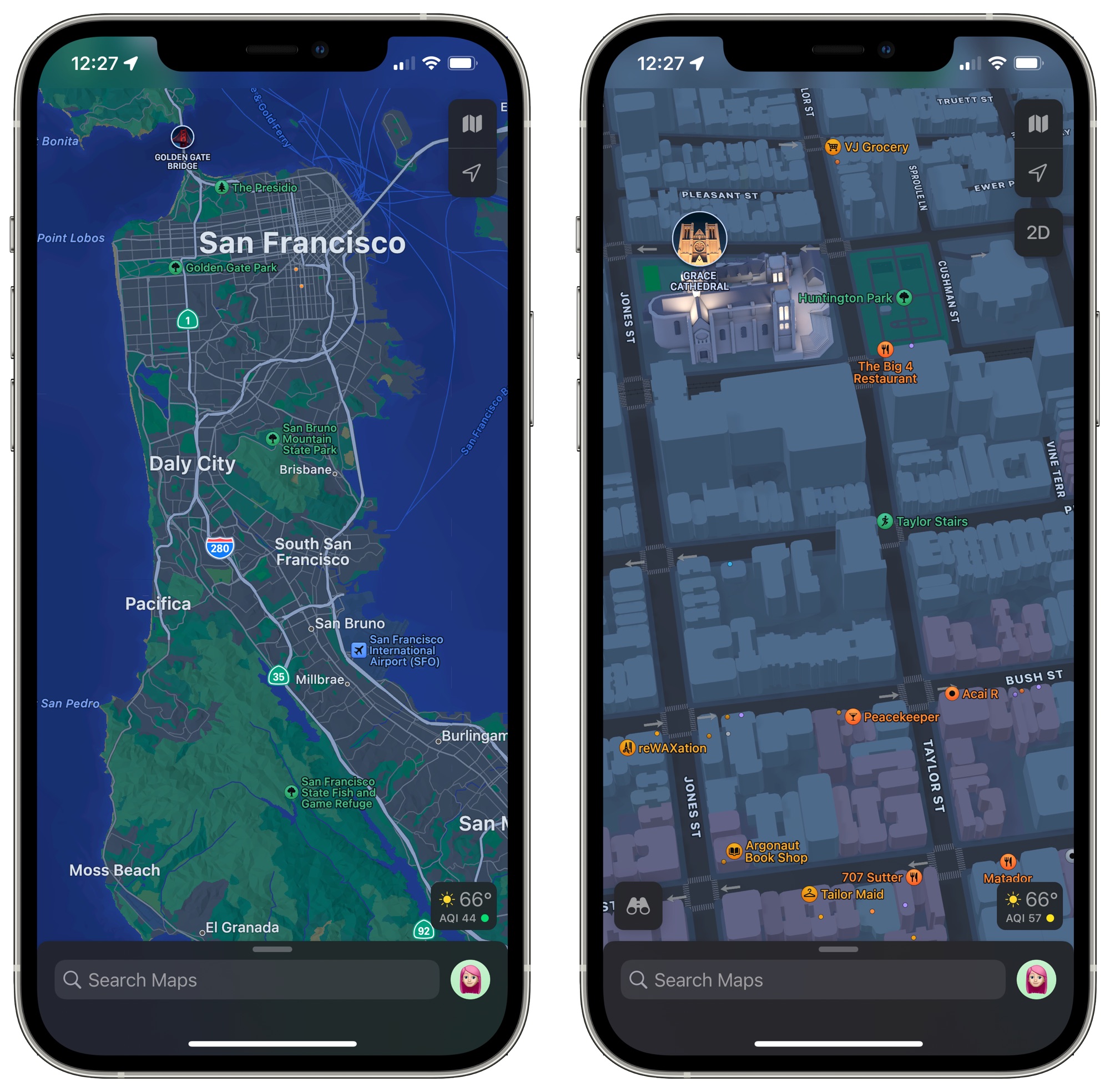 Walking directions in ‌iOS 15‌ can now be shown in augmented reality, making it easier to get where you need to go, especially in situations where the directions are tricky. The AR mode offers step-by-step directions when walking, and you can enter it by scanning the buildings around you when prompted after initiating a route. 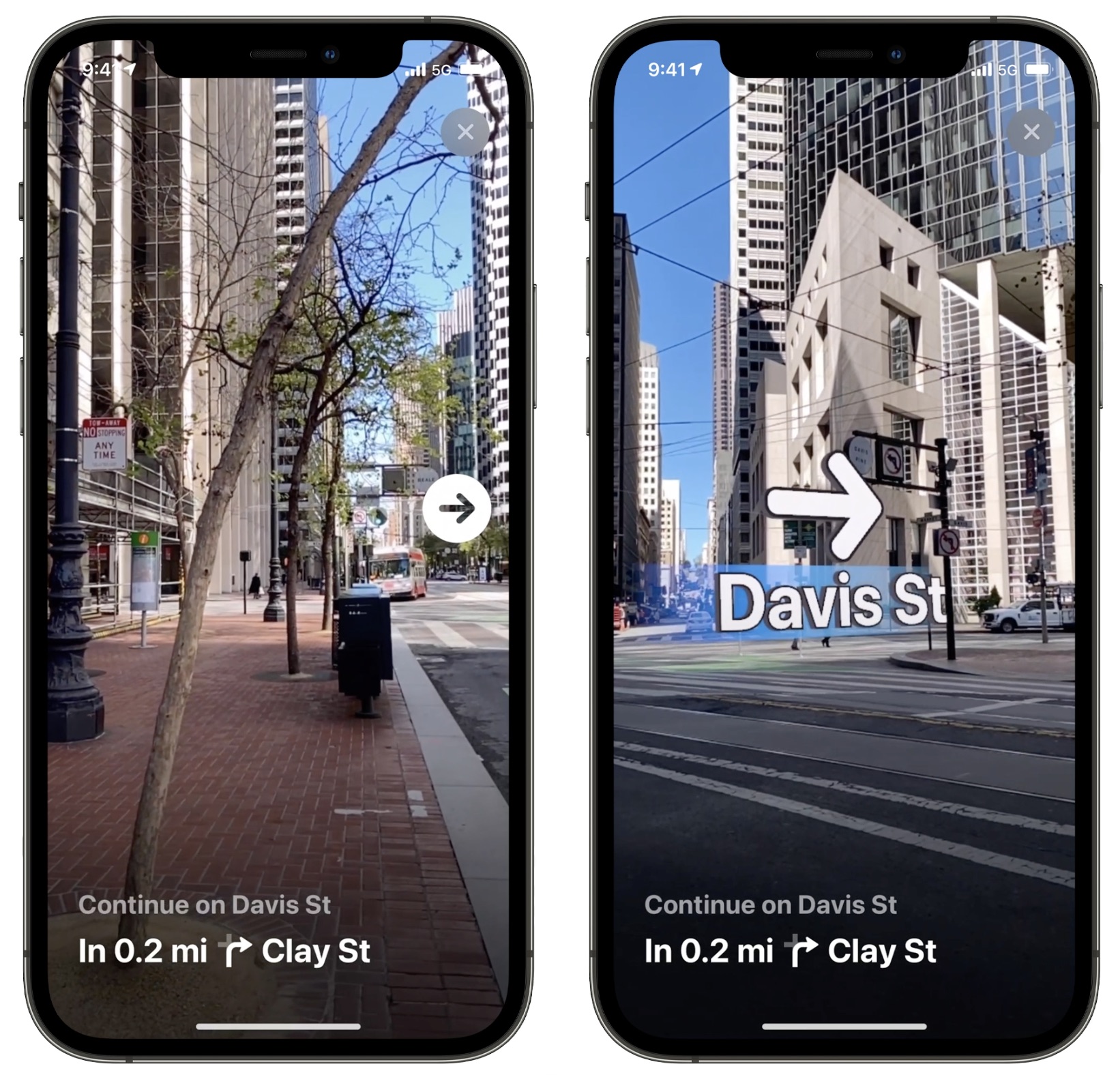 To get AR walking directions, an iPhone that has an A12 chip or later is required. The A12 was first used in the ‌iPhone‌ XS, XS Max, and XR, which came out in 2018. So 2018 and newer iPhones are compatible with the augmented reality feature.

With ‌iOS 15‌, if you continue to zoom out until you can zoom no further, you reach a new globe view that lets you spin around the world and drill into new areas. Prior to ‌iOS 15‌, there was an option to zoom out to a world map, but not a full globe.

The Globe view is easier to navigate than the prior world map, with better pinch in and pinch out gestures and smoother scrolling. 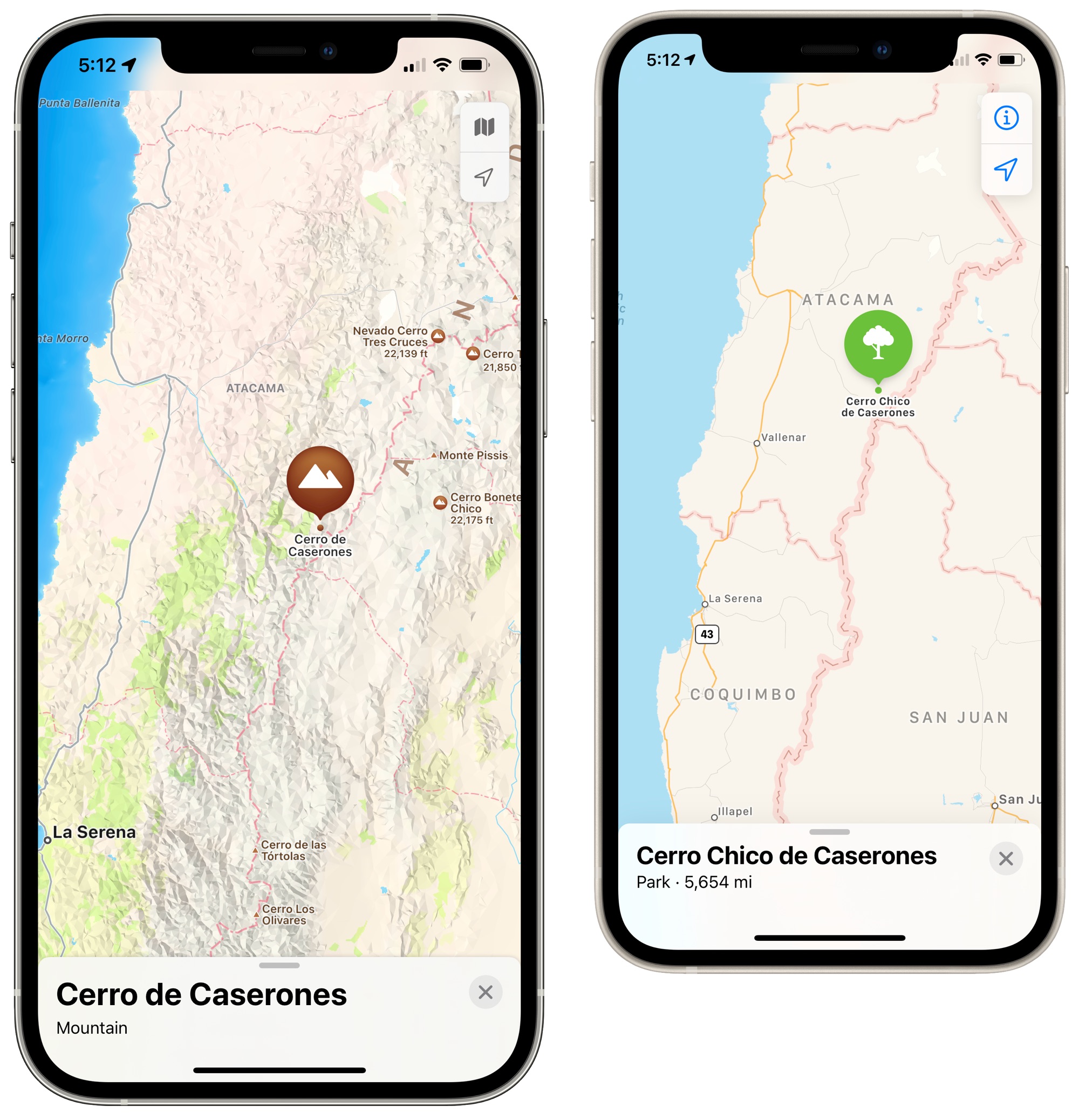 ‌iOS 15‌ left, ‌iOS 14‌ right
To enhance this view, Apple has added more details for mountain ranges, deserts, forests, and ocean. If you zoom into the Andes, for example, Apple has detailed topographical information and you can get information on each mountain peak like elevation, coordinates, distance, and more. 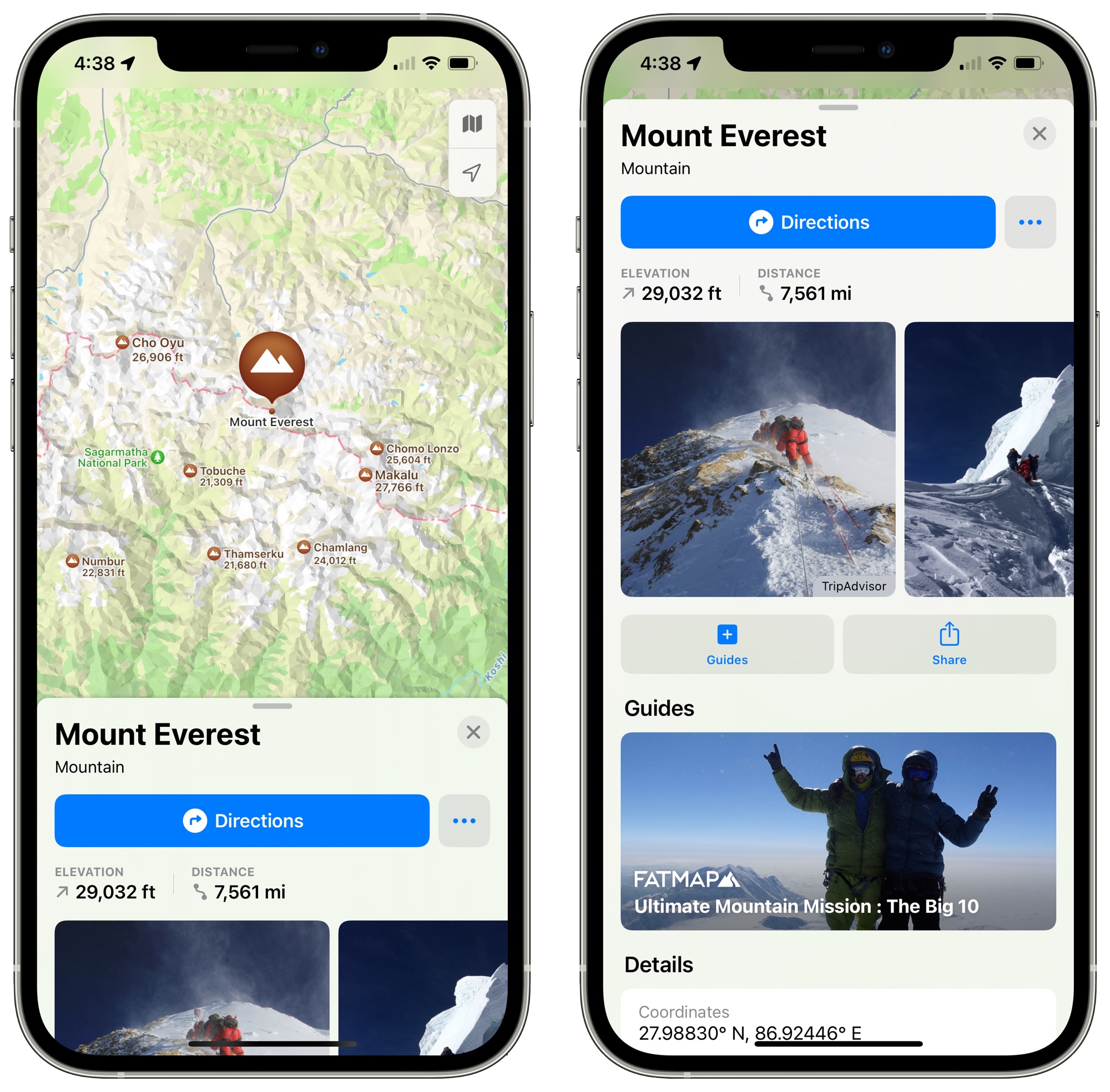 When getting directions in the Maps app, ‌iOS 15‌ has a feature that lets you choose a time to arrive or a time to leave, allowing you to get prospective commuting lengths ahead of time. 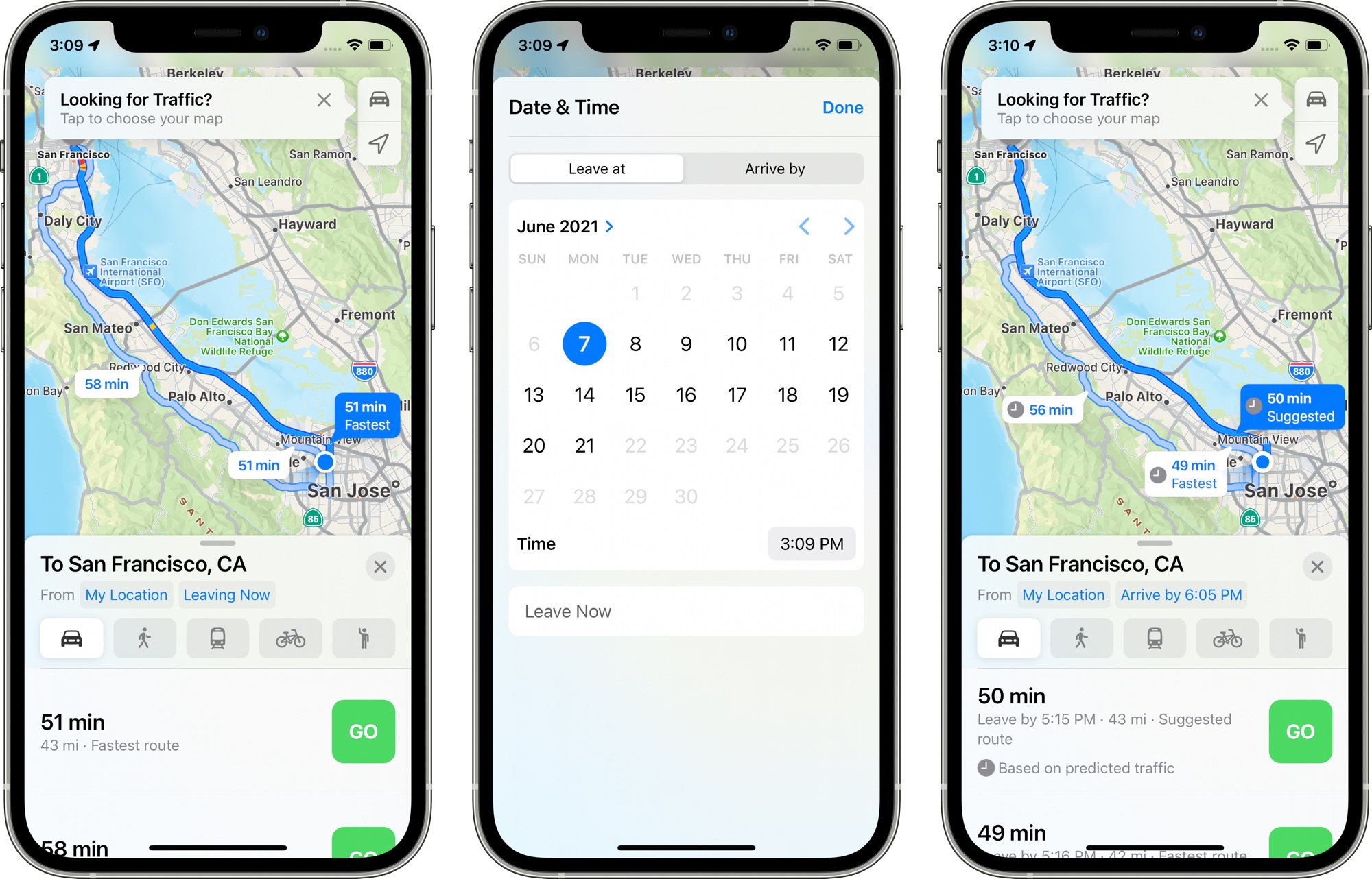 Tapping on “Leaving Now” next to “My Location” when getting directions has options for “Leave at” or “Arrive by” times to select dates and specific times.

In cities with updated maps, the transit map has been updated with a more detailed view that shows major bus routes. Frequent transit riders can see all of the departures that are listed near them and pin their favorite lines so they always show at the top of the Maps interface. 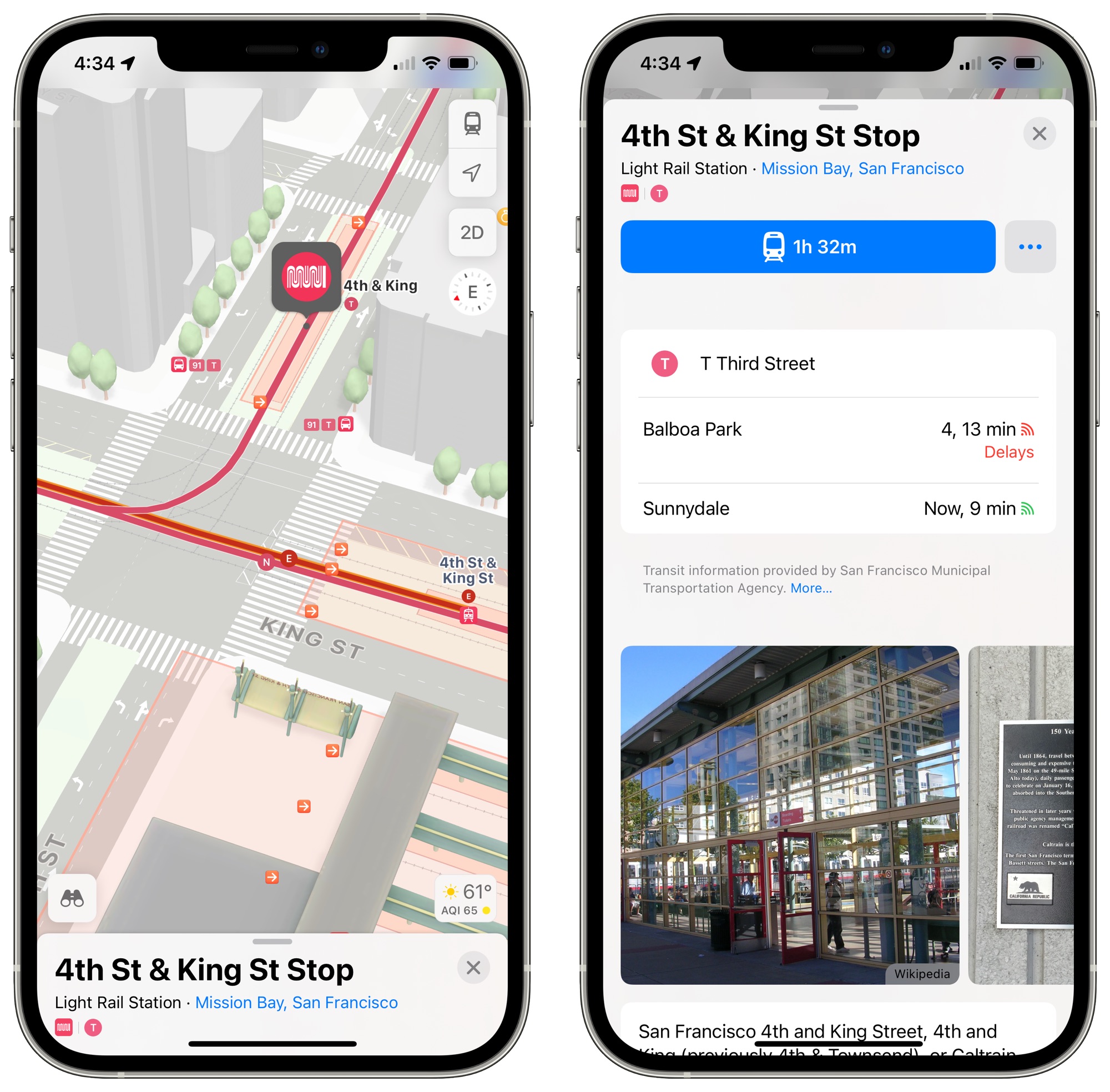 While on public transit, there’s an updated user interface that makes it easier for users to see and interact with their routes in a one-handed operation mode, useful when there are no seats available. 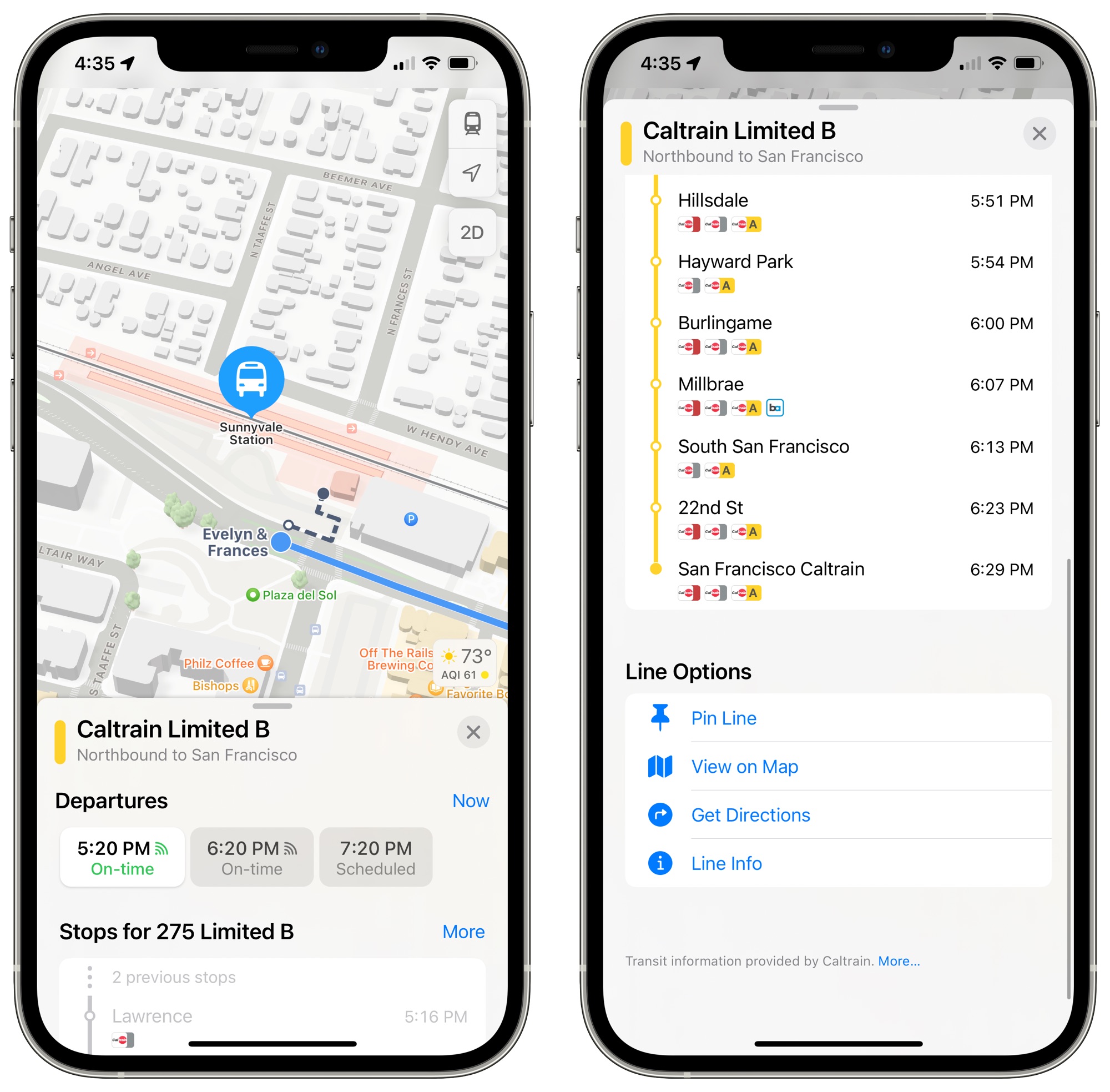 As a stop approaches on public transit, Maps will send a notification that it’s nearing time to disembark.

Place cards for businesses, landmarks, restaurants, and more have been updated with a new design, with Apple providing details about nearby places, other spots at the same location, Guide availability, and more. Apple is still using Yelp to pull in information like reviews. 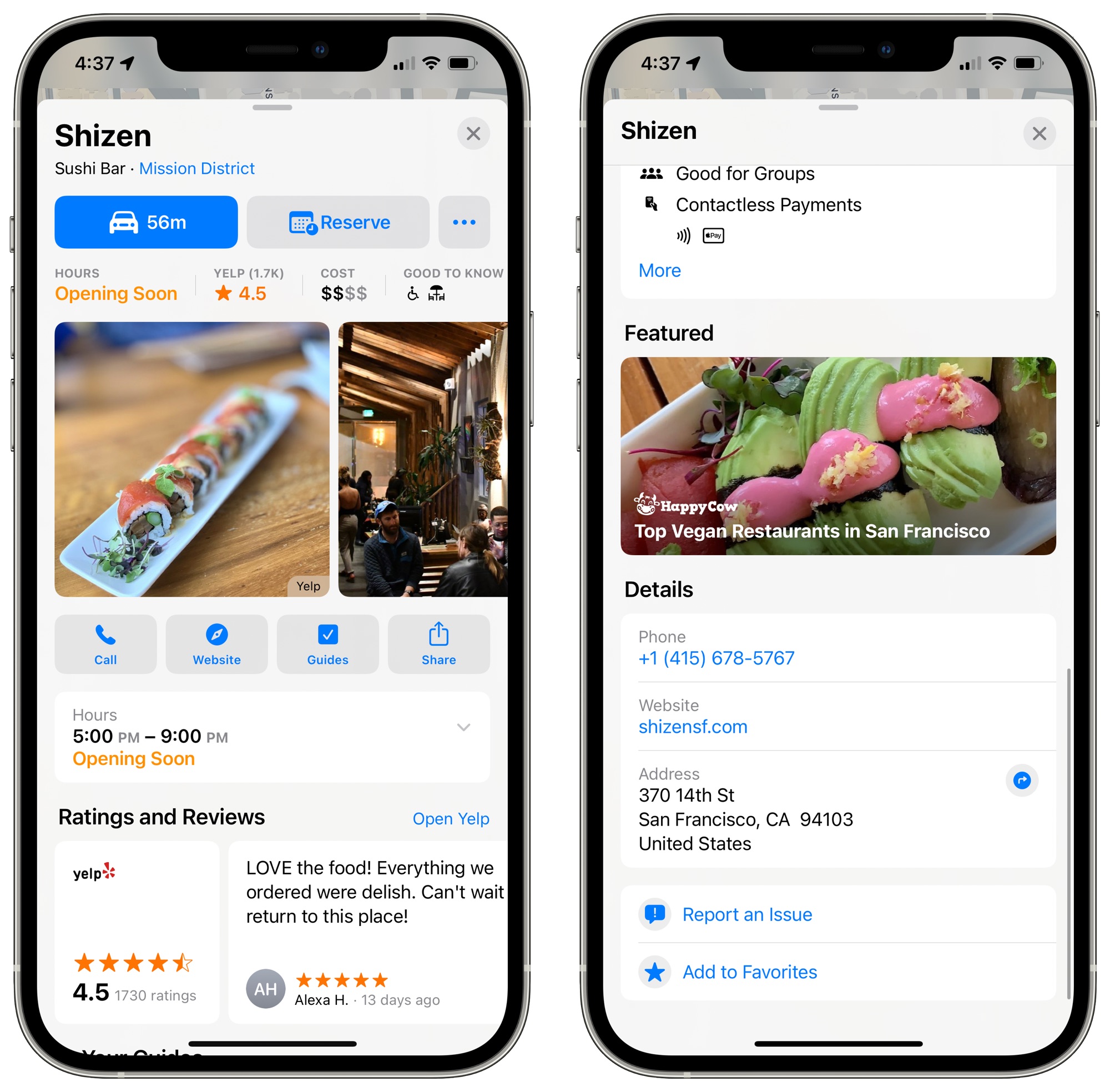 Apple says that it’s easier to find and interact with information for businesses or explore details about cities. Physical features like mountain ranges now have their own place cards with details like elevation.

Apple added a dedicated Guides Home that houses editorially curated guides with tips on what to do in a city where you live or where you’re visiting. 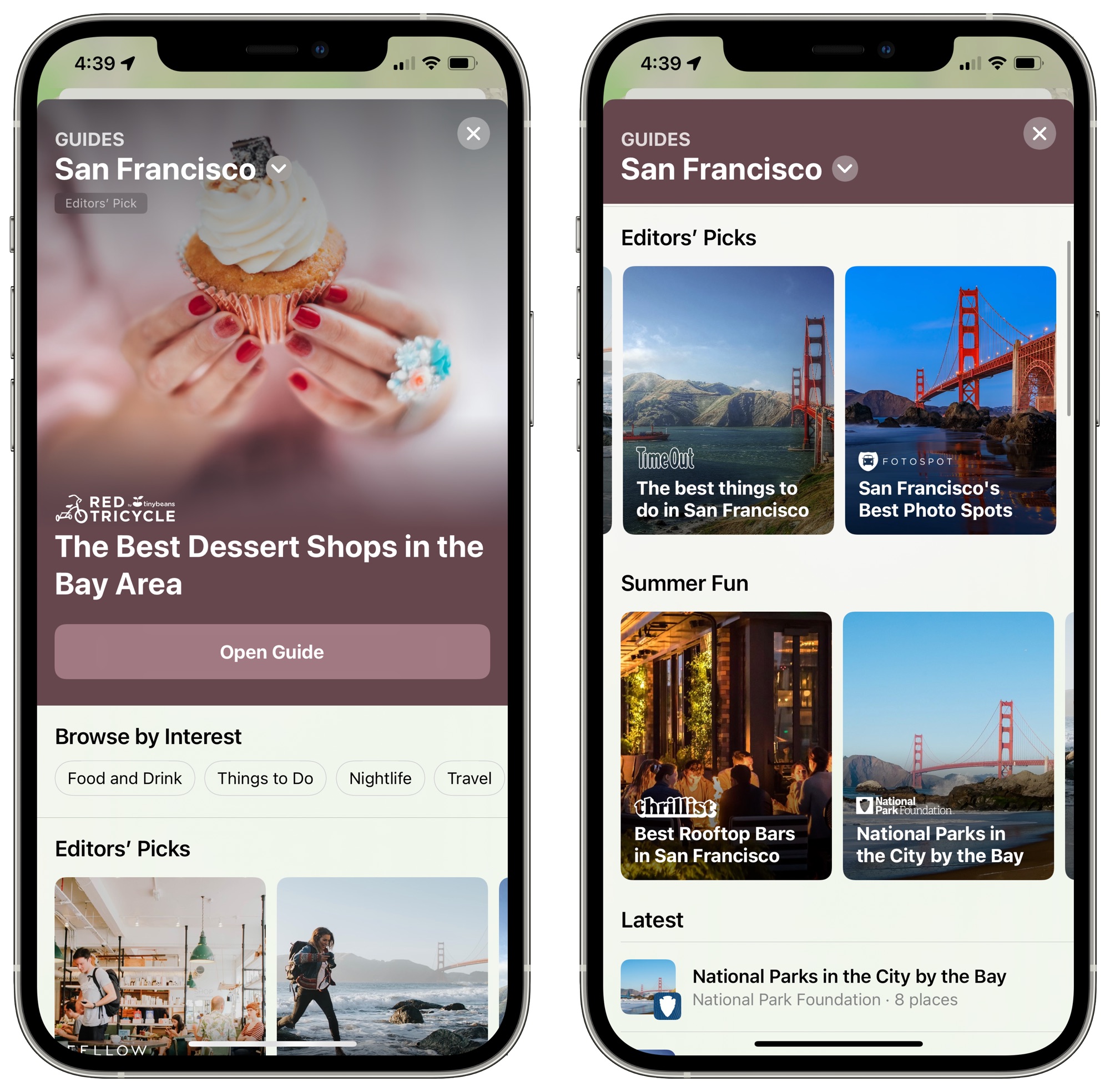 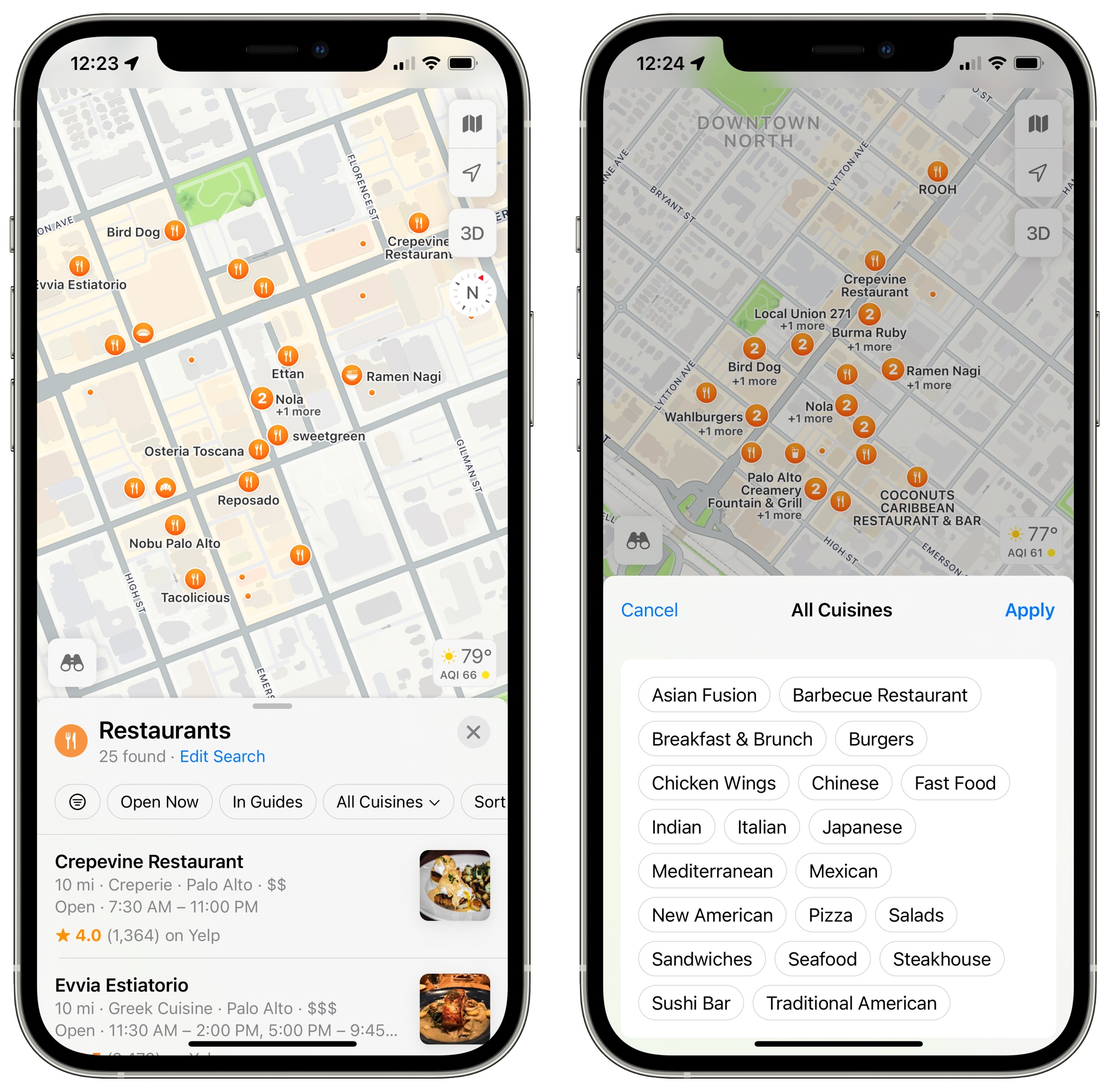 If you move around the map after executing a search, the Maps app will automatically update the search results to the new location. 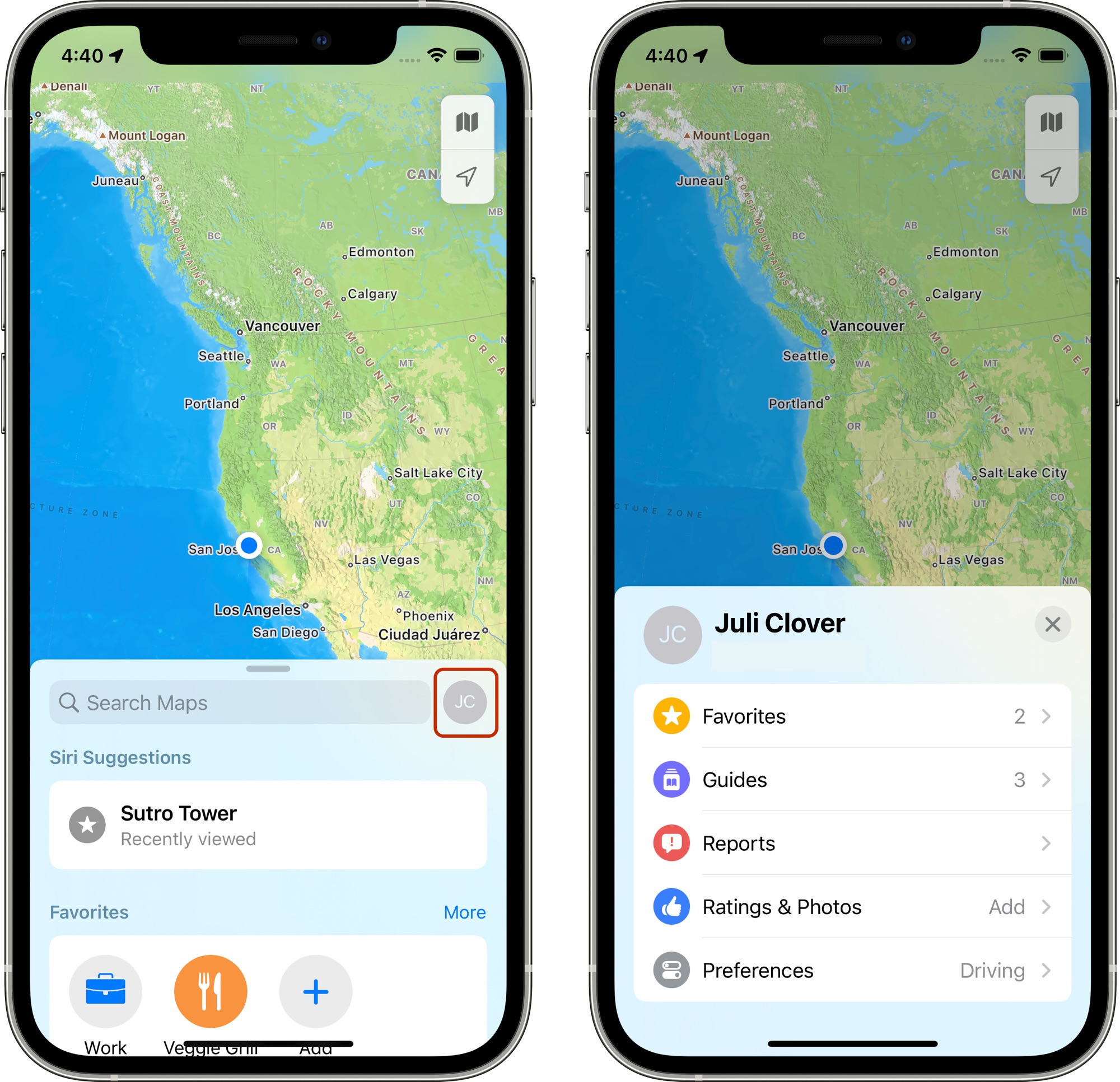 It also aggregates Favorites, Guides, Ratings, and Photos in addition to providing quick access to reporting issues and accidents.

Have questions about Maps in ‌iOS 15‌, know of a feature we left out, or want to offer feedback on this guide? Send us an email here.Related Roundups: iOS 15, iPadOS 15Related Forum: iOS 15
This article, “Everything New in the iOS 15 Maps App: Updated Details, AR Walking Directions, Globe View and More” first appeared on MacRumors.com