Let me tell you a story. Once upon a time, there was a company called LeEco that burst onto the American shore with big promises and reasonably priced 4K Android TVs. Long story short, the company went belly up within a year. Fast forward to 2021 and I’m left with a TV stuck on Android 6.0, while the most recent version is Android TV OS 10.

It’s a tale as old as time, but a company doesn’t have to go under to leave you stranded with old software. My JBL Link Bar soundbar with Android TV is proof of that. It’s currently running Android TV OS 9 with the last update coming nearly a year ago and no signs of another update coming anywhere in the near future.

The takeaway from this is, if you want your TV to run the latest version of software, it’s best to stick with a brand with a good track record with updates. And what other company would be more likely to update its TV box than the one that is responsible for creating the software? That’s right, I’m talking about Google, this is the Chromecast with Google TV review after all.

The Chromecast with Google TV is slightly larger than the previous generation Chromecasts, while also being compact. Basically, all you need to know is that it’s sleek and small enough to stay hidden behind your TV. 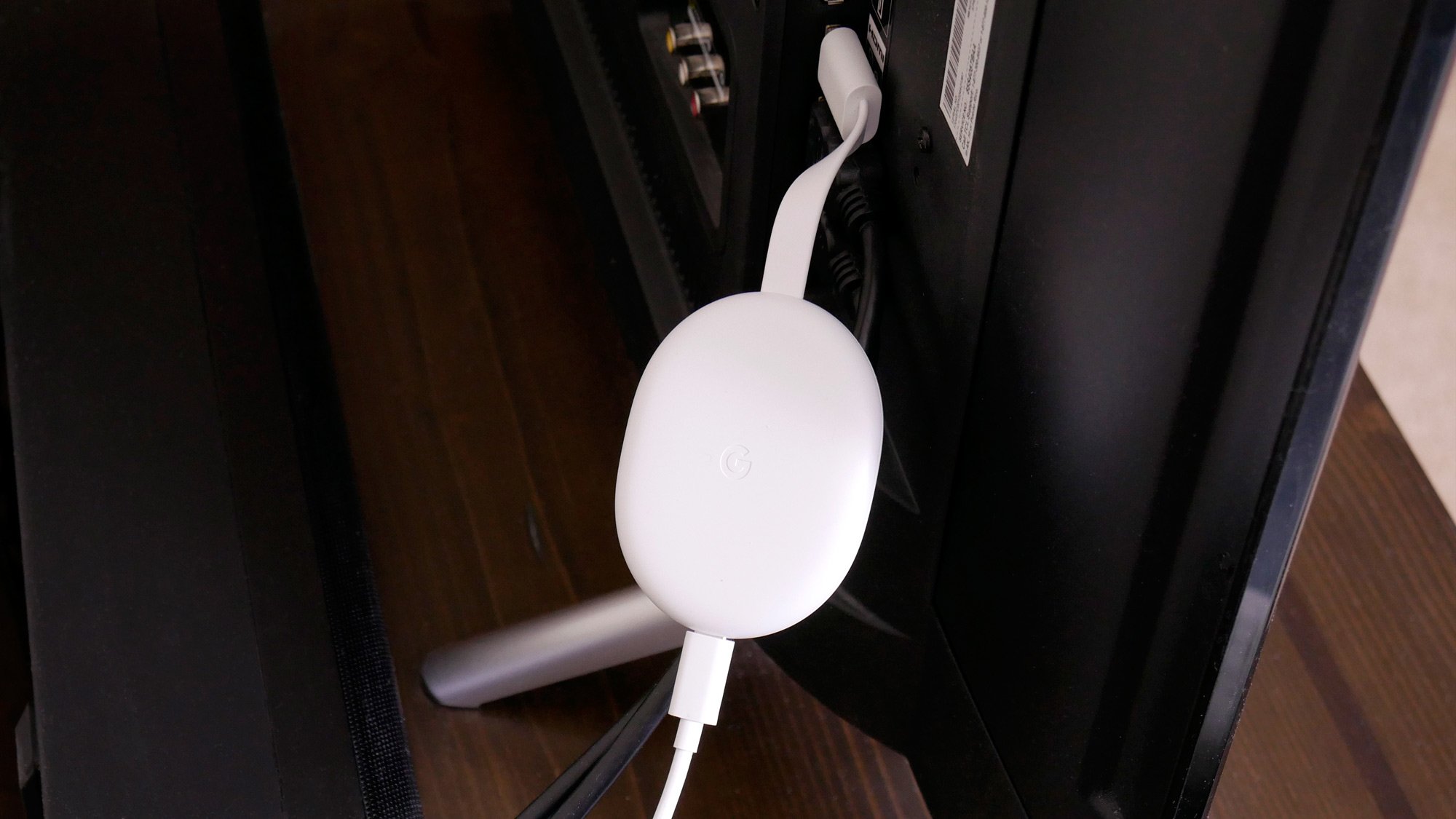 It also comes in three different colors, Snow, Sunrise, and Sky. None of this matters for the unit itself, but it will change what color your remote is. I have the Snow unit here, as if you couldn’t tell by its white color already.

However, it is possible to connect a USB-C hub with power delivery to expand the Chromecast with Google TV and add external storage. Some things to note, it will only read FAT32 filesystems and it’s going to require a higher wattage power brick. 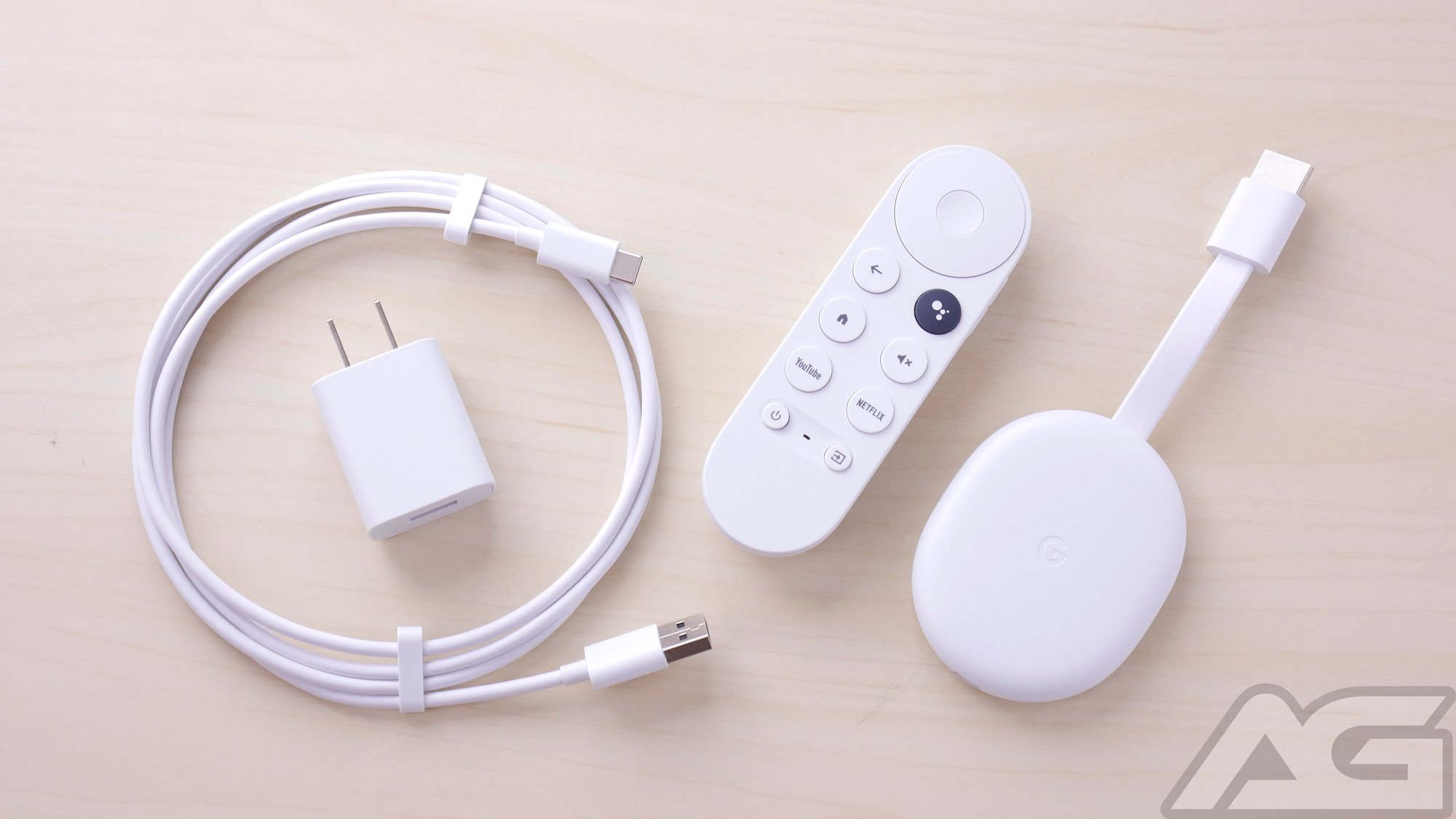 For USB hubs, I’d suggest the Vemont USB-C Hub 5-in-1. It has been proven to work well with the Chromecast with Google TV and it can even add an Ethernet port to it. However, you’re going to have to switch to a power brick with more watts such as this Anker USB-C 45W charger.

To address the elephant in the room, yes, Google recently updated the home screen on Android TV that shows “recommendations” AKA ads. The Android TV community has been very vocal about this, even tanking the review score of the Launcher app on the Play Store with negative reviews.

I’m not a fan of ads myself, but I’m honestly not too bothered by this change. I’m mostly blind to the promoted shows and just treat it as a live wallpaper that makes the background more interesting than a static image. A few times I may even pay attention and learn about a new show or movie.

Regardless, I can’t defend Google’s decision here, and at the very least there should be a way to toggle this off in the settings. I’m sure there would be many like myself who wouldn’t touch it, but it definitely would make a lot of users happy to disable it.

Now, putting that aside, here’s what the Chromecast with Google TV’s UI is all about–content instead of services. That’s why everywhere you look there are suggestions for movies and TV shows for you to watch with your apps list taking a back seat. 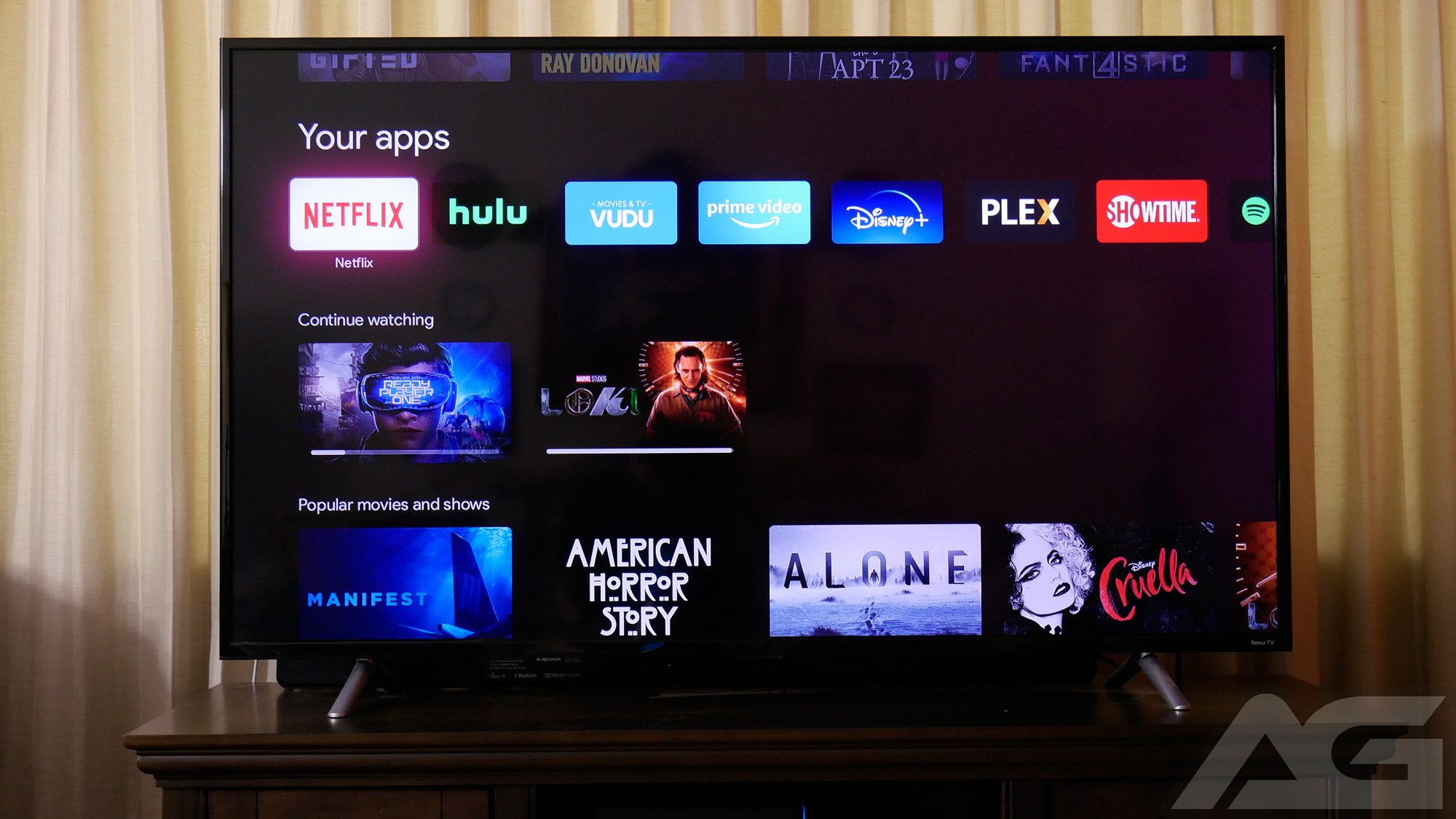 In essence, Google is trying to get you to content as quickly as possible without requiring you to open a variety of apps to find something to watch. That’s why there is a “Continue watching” section which compiles a list of shows and movies you’ve started from various services. In theory, this should allow you to jump right back into whatever you were watching bypassing opening the actual app.

At first, I was blown away by this and found it extremely convenient. It even synced up with shows I had started from apps on a Roku box. Soon though, I became disappointed when the section failed to update.

For example, shows stopped updating what episode I was on leaving it stuck on one particular episode. Even worse, it would remain there even after I finished the entire series. After a couple of weeks, the show finally disappeared from the “Continue watching” section, and now nothing from Netflix has appeared there since.

There are also apps that don’t support the “Continue watching” section such as Vudu and Prime Video. That’s the fault of the app developer though–but even if it worked, it wouldn’t work properly–just like with the Netflix integration. All in all, this would be an amazing feature, if only it worked consistently.

Aside from the broken “Continue watching” section, another way Chromecast with Google TV streamlines watching content is with the voice-activated remote.

This is a pretty big deal because this is the first Chromecast device to include a remote. Not only that, but it’s pretty essential to the user experience because it has a mic in it which allows you to use Google Assistant with the Chromecast with Google TV.

Using voice commands was my preferred way to interact with the Chromecast, because it made it so easy to start up videos. Plus, you can even use it to quickly rewind a video if you missed something important. Just try saying, “Hey Google, rewind 10 seconds” or any other duration. 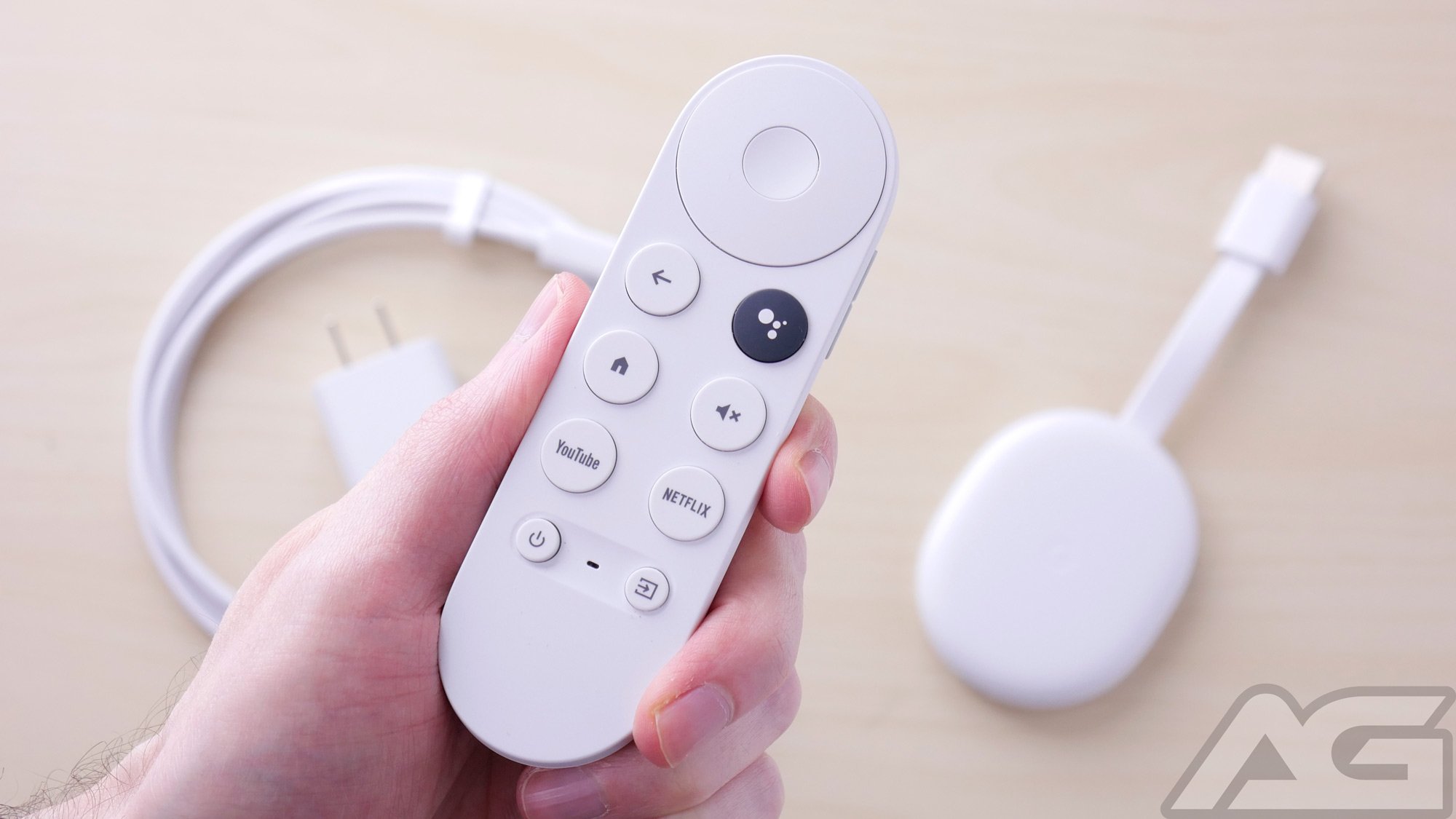 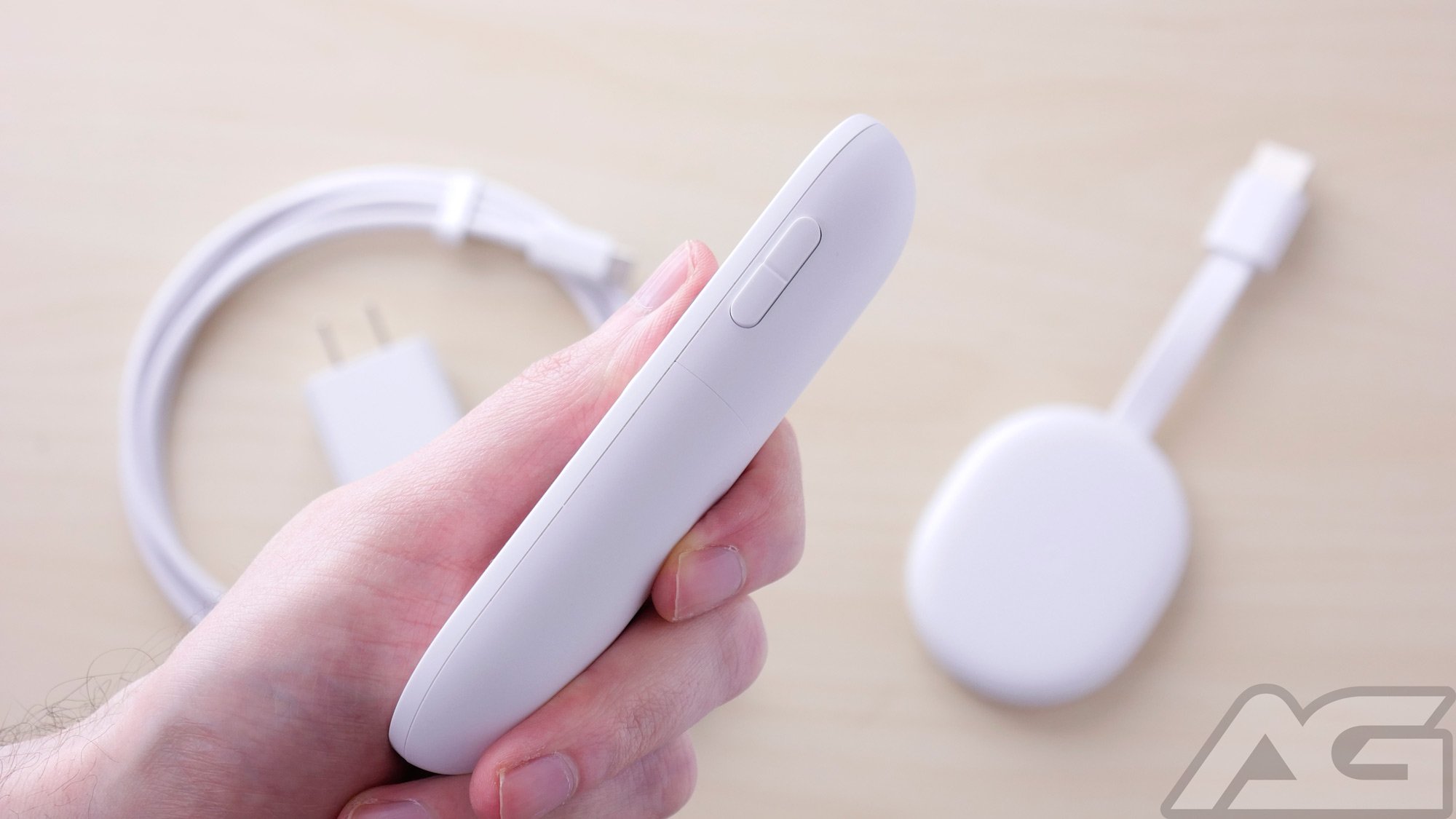 However, if you prefer to press buttons or need to keep the noise down late at night, then rest assured, the remote has all the buttons you need.

At the top, is a circle that allows you to navigate up, down, left, and right. In the center of the circle, is the button you’ll use to make selections. Below that, is the back button, Google Assistant button, home button, mute button, and two buttons dedicated to the YouTube and Netflix apps.

Additionally, there is a power and input button that can be programmed to control your TV, as well as volume keys on the side of the remote. These are programmed during the initial setup and it walks you through selecting your TV, soundbar, or Audio/Video Receiver. 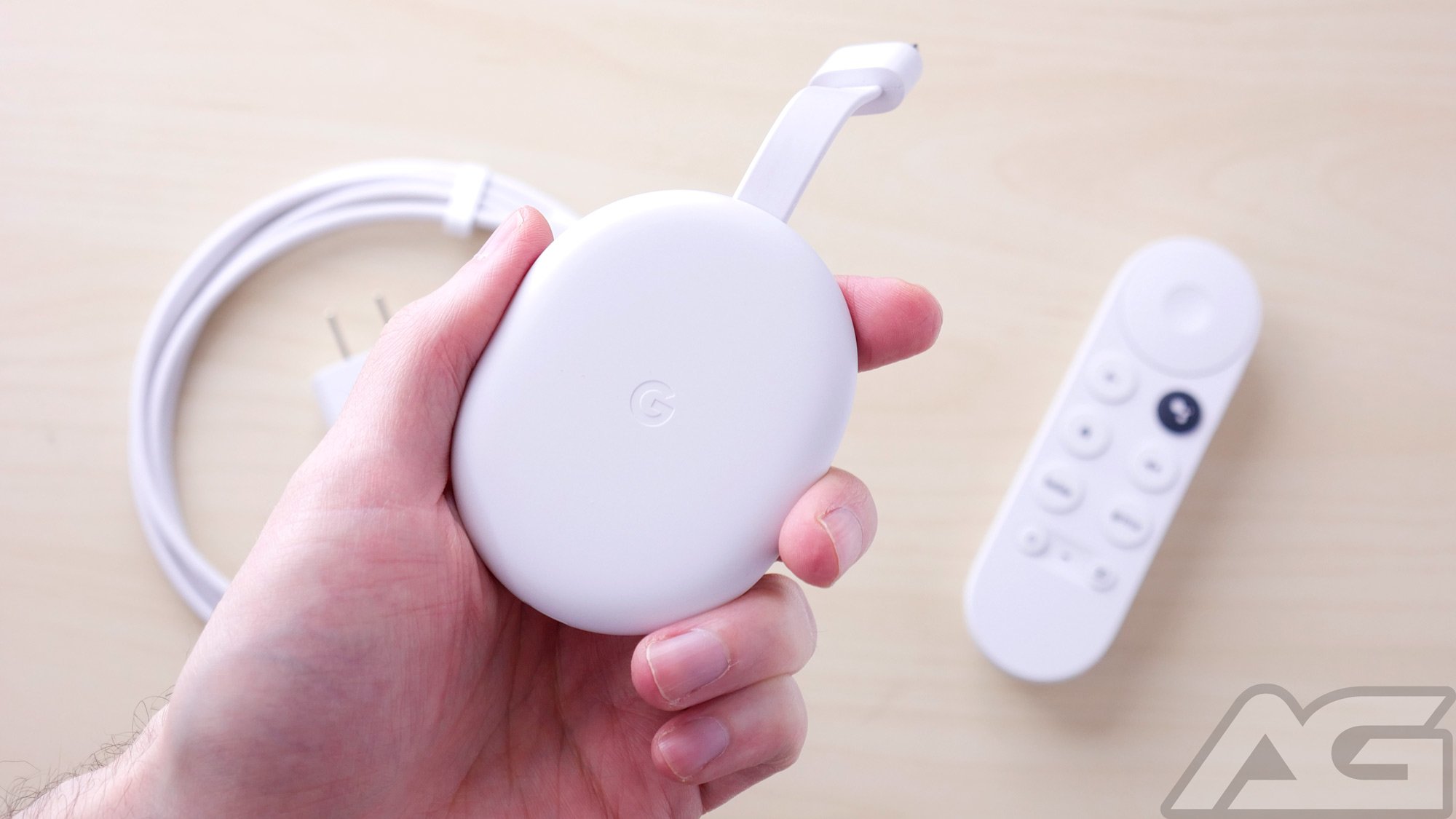 Is the Chromecast with Google TV still worth buying in 2021? The answer is a resounding yes. For $50 you get a very capable streamer with a voice-activated remote that supports 4K HDR up to 60fps in Dolby Vision, HDR10, and HDR10+ that runs the most up-to-date version of Android TV OS.

Plus, Google has announced Stadia support is available for Google TV so you’ll also have a great way to get Stadia on your TV. A feature that should have been there at launch, sure, but better late than never.