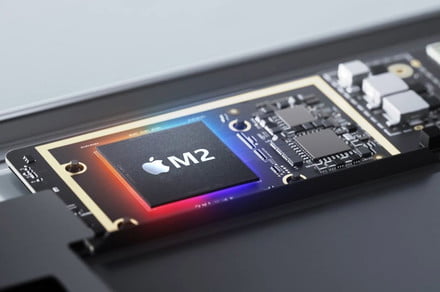 Apple is rumored to be planning the release of its M2 chip along with a new version of the MacBook Air in the first half of 2022. The M2 chip appears to be different from the M1X chip that is allegedly reserved for high-end Pro Mac devices such as the MacBook Pro and a larger iMac Pro.

According to the well-known leaker Dylandkt, Apple is planning to launch the M2 chip in redesigned MacBook Air versions. The remodeled versions will feature colorful designs similar to the colors the iMac range boasts.

Just wanted to share some details on when to expect the next generation M2 (not the M1X which is reserved for the Pro Mac devices). This processor is on track to release in the first half of 2022 alongside the upcoming colorful Macbook (Air).

Multiple other sources echo Dylan’s prediction about the MacBook Air’s colors. For instance, in May, leaker Jon Prosser claimed that Apple has recently been testing prototypes of a new MacBook in various shades, including a blue one. He went on to predict that the company will likely be releasing “colors for average consumers,” implying that the new MacBook Air could get color options.

The reliable Apple analyst Ming-Chi Kuo strengthened a part of Dylan’s prediction by announcing that Apple will most probably be releasing a new MacBook Air with a mini-LED display in 2022.

“In 2022, there will be a new MacBook air featuring a fresh design that will be priced lower than the current M1 version,” he said.

Dylan also notes that the M2 chip is different from the rumored M1X chip that is a variant of the M1 we might see in just a few months, saying that the “M1X is an extension of the M1 processor with greater power draw, more CPU and GPU cores. M2 is a next-generation chip most likely built on the same foundation the A15 is built on.”

Bloomberg journalist Mark Gurman’s prediction on Apple’s future plans also aligns with Dylan’s claims. Gurman claimed that “Apple is said to be reserving the ‌M2‌ name for next year’s chips, and that this will likely debut in a new ‌MacBook Air‌.”

The timing of 2022 does, however, counter some recent rumors that the redesigned MacBook Air could get squeezed into 2021 alongside the relaunched MacBook Pro.

Dylan has a track record of accurate predictions. In November 2020, he announced that the new model of the iPad Pro will leverage the M1 chip and, five months later, the product was launched featuring the same chip. Earlier in 2021, he claimed that the new iMac would feature an M1 chip and not the M1X. This claim also turned out to be correct, so there are clearly reasons for us to believe his latest prediction as well.

How to enable Adaptive Sound on your Google Pixel phone