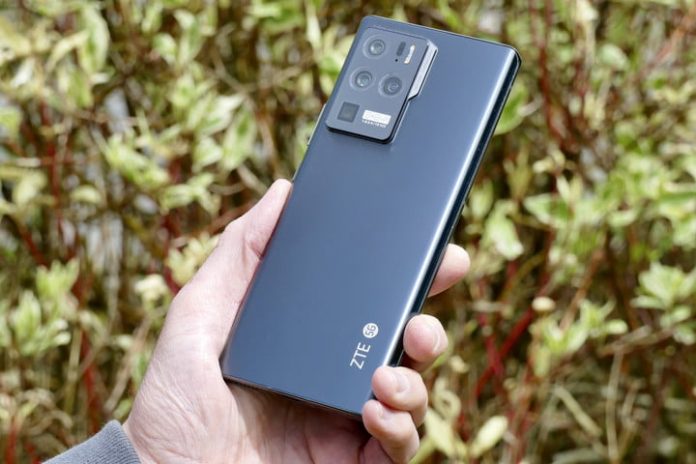 The ZTE Axon 30 Ultra is an unexpected delight. ZTE’s first smartphone to be released in the United States for several years, it’s an Android phone that offers great performance, a beautiful display, and a long-lasting battery at a reasonable price. While it has 5G support only from T-Mobile (and only one 5G band at that), it’s a great all-around phone, and one that any Android fan should consider if they’re looking to buy something new. Of course, if you’re also open to iPhones, the wonderful iPhone 12 happens to be in its price range, and it offers similarly impressive specs.

The ZTE Axon 30 Ultra is a good-looking phone, even if it doesn’t rocking the boat and go for a unique look. It features an aluminum frame with a Gorilla Glass 5 rear, which sleekly tapers at the sides. The same goes for the front of the phone, with the edge-to-edge display carrying a punch-hole selfie camera at top-center. It’s sharp and modern, although some may be a little turned off by the fairly bulky camera module on its rear.

It’s a similar story with the iPhone 12, which also looks the part without doing anything radical or particularly impressive. It sports the now tried-and-true notch at the top of the display, which is otherwise edge-to-edge. Apple did see fit to introduce one new design element, with the flat sides of the phone ripped from recent iPad Pro models. This gives the phone a more angular appearance, which may or may not be an improvement depending on your taste.

The iPhone 12 comes with a 6.1-inch Super Retina XDR OLED display, which provides 2532 x 1170 pixels (or 460 pixels per inch). The ZTE Axon 30 Ultra, meanwhile, houses a bigger, 6.67-inch AMOLED display, with 2400 x 1080 pixels (395 pixels per inch). In some respects the iPhone looks a little crisper and richer, although the ZTE does support a 144Hz refresh rate. This gives its screen noticeably more fluidity than the iPhone, making moving images seem more realistic and vivid.

While the refresh rate would give the ZTE Axon 30 Ultra the advantage here, it lacks an official IP rating. By contrast, the iPhone 12 is IP68 certified, indicating you can dip it in up to 1.5 meters of water for up to 30 minutes. Apple also claims that the iPhone 12’s Ceramic Guard glass will provide greater protection against falls and damage compared to previous models, boosting its durability further.

Given that this superior durability is balanced out by the ZTE’s refresh rate, we’re calling this opening round a tie.

The iPhone 12 is powered by Apple’s latest smartphone processor, the A14 Bionic chip. Its biggest claim to fame is that it employs 5nm (nanometer) transistors, which are smaller than the 7nm varieties used on previous chips and therefore offer superior speed. Basically, it ensures that the iPhone 12 handles the latest video games and applications with ease, even those that incorporate machine learning and other advanced tech.

It’s an impressively fast chip, but then so is the Qualcomm Snapdragon 888, which also uses 5nm transistors. Coupled with the 8GB of RAM you get as standard with the ZTE Axon 30 Ultra, it makes for another seamless smartphone experience, and ensures the ZTE phone will last you a good few years before falling behind the pace. Whether it’s faster or more powerful than the A14 Bionic is a tough call to make, although GeekBench (5.1) tests for the ZTE yield a score of 3,582, whereas the iPhone 12 garnered a score of 4,067.

When it comes to the battery, things are again fairly even. This time, however, we’d say that the ZTE just about edges it. Its 4,600mAh battery will leave you with a decent chunk of power even after a day of heavy use, more so than the iPhone 12, which still serves most users well with its 2,815mAh cell. Then there’s the fact the ZTE supports 65W fast charging (the iPhone 12 only goes up to 20W), so you can almost fully recharge the phone from 0% to 100& while making a cup of coffee.

If you’re looking only at specs, you’d think the ZTE Axon 30 Ultra comes with the superior camera. It boasts a quad-lens setup, featuring a 64MP standard lens, a 64MP wide lens, a 64MP ultrawide lens, and an 8MP periscope telephoto lens. The iPhone 12, on the other hand, carries only a dual-lens rear camera, comprising a 12MP wide and a 12MP ultrawide lens.

This might seem underwhelming at first glance, but the iPhone 12 ultimately takes much better photos. Apple’s Neural Engine, Smart HDR 3, Deep Fusion, and other software tricks means that its shots are well-balanced, clear, bright, and dynamic in the vast majority of conditions. Photos are realistic and colorful without being too saturated, while low-light shots perform well in capturing enough detail.

Sadly, for all of its hardware, this performance is simply something the ZTE can’t match. Our review found that picture quality is just a little too inconsistent to make it a great camera phone, with some shots being too dark and others being too saturated with color. It’s a shame, because the phone is good at most other things, but right now its camera doesn’t live up to its other features.

The iPhone 12 operates using iOS 14 (soon to be iOS 15), offering some of the biggest software leaps Apple has provided in years. It introduces home screen widgets, an App Library, app clips (letting you download only a portion of an app), and a native Translate app, while keeping the simple interface we all know and love.

The ZTE Axon 30 Ultra runs on Android 11 overlaid with ZTE’s own MyOS 11. Its treatment of the basic Android experience is mostly cosmetic, with some different icon shapes and colors, a different layout for the notification shade, and a few other minor touches. It’s pretty fast, but does suffer at the moment with issues delivering some notifications.

With upgrades, you can almost be certain that iPhone 12 users will be more regularly serviced with new software version, and will be supported with updates for longer. This is simply because Apple develops its own operating systems, while ZTE has to source new versions of Android from Google and then apply its own skin over the top.

The iPhone 12 is the first Apple smartphone to support 5G. Fortunately enough, this support covers both mmWave and sub-6Hz 5G bands, so you can be sure you’ll get the fastest download speeds (if 5G is available in your area). The ZTE Axon 30 Ultra is also a 5G-ready phone, but unfortunately you won’t be able to connect to a 5G network with the phone in the United States. Admittedly, it does feature (only) one 5G carrier band that connects to T-Mobile, but it doesn’t support 5G at all with AT&T, the other network supporting the phone in the U.S.

The iPhone 12 also introduces MagSafe charging and accessories, letting you attach wireless chargers and various other gadgets simply by touching it against the phone’s rear. We should also point out that, as with every flagship iPhone since the iPhone X, the iPhone 12 supports Face ID.

As for the ZTE Axon 30 Ultra, it lacks any significant special features. Lack is probably the operative word here, in fact, since it lacks an IP rating, lacks support for wireless charging, and all-but lacks support for 5G (in the U.S.). Taken together, this provides the iPhone 12 with an easy win.

The iPhone 12 starts from $799 for the 64GB version, while the 128GB and 256GB versions will cost you $849 and $949, respectively. It’s available from every major carrier and the vast majority of major retail outlets.

Make no mistake, the iPhone 12 is a better phone than the ZTE Axon 30 Ultra. It has a better camera, better software, 5G support, and better special features. It also has slightly faster performance, and while the ZTE does have a longer lasting battery and a more impressive screen, the difference here isn’t that big to have a significant impact. Of course, if you prefer Android or bigger phones you may want to give the ZTE a look, but if you want the best overall experience, there’s little doubt you’d be happier with the iPhone.