HomeNewsTwitter May Let You 'Unmention' Yourself in Tweets and Prevent People Tagging...
News 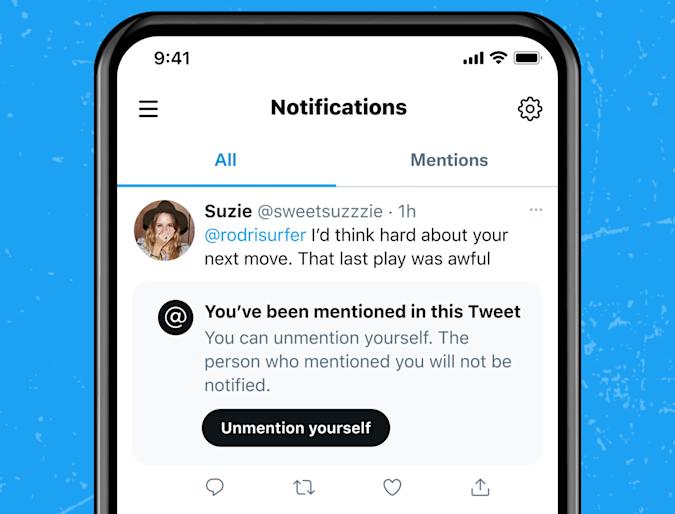 Twitter is considering offering users the ability to “unmention” themselves in other people’s tweets as part of a wider privacy drive for the social media platform.

The early concept has been shared by Twitter designed Dominic Camozzi, who says the idea behind it is to help users control unwanted attention.

An example image shows a notification when the user has been mentioned in a tweet, with an option to “Unmention yourself” (i.e. remove your Twitter handle from it) without the author of the tweet being notified of the change.

In another related option currently being weighed up, Twitter could send you a notification when someone you don’t follow mentions you, allowing you to review the tweet, unmention yourself from it, and block that user from mentioning you again.

Going further, if someone you don’t follow @ mentions you, you’ll get a special notification. If you unmention yourself from there, the Tweet author will not be able to mention you again. pic.twitter.com/RTFBEnkPFf

Additionally, Camozzi is toying with the idea of giving users the ability to “control mass mentions” by preventing anyone on the platform from mentioning them for one day, three days, or seven days, thereby providing respite for anyone inundated with activity related to their account.

As with all early concepts, these changes may or may not be implemented by Twitter, and the company is actively looking for feedback from users regarding the ideas.

(Via Engadget.) Tag: Twitter
This article, “Twitter May Let You ‘Unmention’ Yourself in Tweets and Prevent People Tagging You in Future Replies” first appeared on MacRumors.com