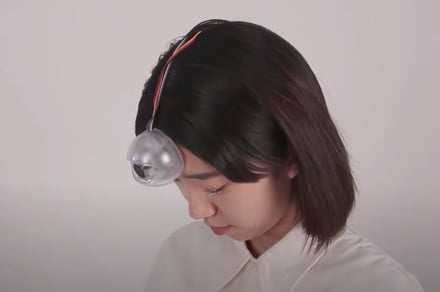 Is this the look of the future? Will we soon be walking the streets with a bulbous high-tech “eye” strapped to our forehead?

Probably not, but South Korean industrial designer Paeng Min-wook went ahead and designed such a device anyway, mainly in the hope of drawing attention to the problem of distracted walking.

As the term suggests, distracted walking refers to our failure to focus on the path ahead while strolling along the street. The main distraction these days is, of course, the smartphone, with most folks unable to resist staring at their handset when they should really be looking out for obstacles that can include anything from garbage cans and benches to people and vehicles.

Min-wook created the so-called Third Eye as part of his Phono Sapiens project. The device attaches to your head and uses sensors to detect upcoming obstacles as you saunter along the sidewalk, lost in your handset. When it detects something around two meters away, an alert appears on your phone, thereby preventing a calamitous outcome.

“In this day and age, it’s rare to see people walking on the streets without their smartphones — that’s why I designed The Third Eye,” Min-wook, a postgraduate in innovation design engineering at the Royal College of Art and Imperial College, told the SCMP. “The device can help them walk conveniently while looking at their smartphones.”

During an exercise in which Min-wook tested The Third Eye on the streets of Seoul, some passers-by said it made him look like an alien, while others acknowledged that they might actually need the device for their own safety.

The 28-year-old industrial designer said that rather than commercialize The Third Eye, his aim is to use the device to draw attention to the problem of distracted walking.

“Rather than finding the solution, I try to point out and criticize what we are doing with our smartphones,” Min-wook said, adding, “I hope this can stimulate the future of our society and reflect the absurdity in ourselves.”

Over the years, there have been lots of stories about people stumbling into canals, walking off piers, and falling into manholes while using their phones.

Honolulu, Hawaii considered the matter to be so important that it passed legislation to ban the use of smartphones when using crosswalks. Other places have tackled the issue in their own way, such as putting flashing lights on sidewalks to warn pedestrians that they’re about to step into the road, or by introducing so-called “texting lanes.”

Apparently keen to address the issue, Google earlier this year began to roll out a “Heads Up” feature for Android that prompts distracted walkers to stay aware of their surroundings.