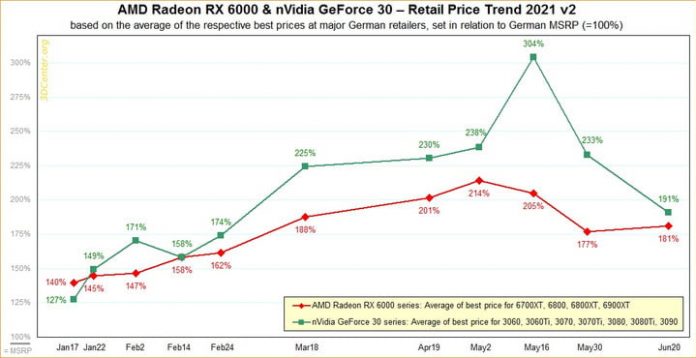 After nearly a year of bad news, there are signs that the GPU shortage is ending. Following a report last week about falling prices in Europe, 3DCenter has put out a new report showing a boost in GPU supply at European retailers, as well as lower prices.

Lower prices are relative given the horrible state of the graphics card market. The average price of Nvidia cards dropped from a peak of 204% above MSRP to 91% above MSRP. The report also shows a large improvement in the number of Nvidia cards available. Short of the Nvidia RTX 3060 Ti, which is still experiencing stock issues, the entire Ampere range is available across most retailers in Europe, according to the report.

Nvidia saw the most benefit. AMD cards are still struggling in Europe. The report shows that prices are down from a peak of 114% above MSRP in early May, but still at 81% (in late May, the average price was 77% above MSRP). The 3DCenter report points out this is mainly an availability issue. The RX 6800 XT and RX 6800 are still in short supply among European retailers, pushing the average price of the range up.

It’s important to remember that AMD’s RDNA 2 lineup only has four graphics cards, while Nvidia’s Ampere lineup has seven. Since the launch of the RX 6700 XT, AMD hasn’t introduced any new cards to the range.

In addition, Lite Hash Rate (LHR) versions of Nvidia’s cards are starting to work their way into the market. The LHR GPU core limits the Ethereum hash rate, which lessens demand from cryptocurrency miners. There’s still likely a mix of LHR and non-LHR cards in 3DCenter’s data, so hopefully prices will continue to drop over the coming months.

Nvidia is also reportedly bolstering production of RTX 30-series graphics cards, likely capitalizing on the opportunity to return the GPU market to normal. Although 3DCenter’s report indicates things are heading in that direction, stable prices are still many months off. The price of DRAM modules is expected to increase throughout the year, which could drive up GPU prices. Cards imported into the U.S. are also subject to tariffs, too, which have steadily increased prices in the U.S. over the past several months.