HomeNewsNew AirPods and MacBooks Due to Launch Later This Year
News

New AirPods and MacBooks Due to Launch Later This Year 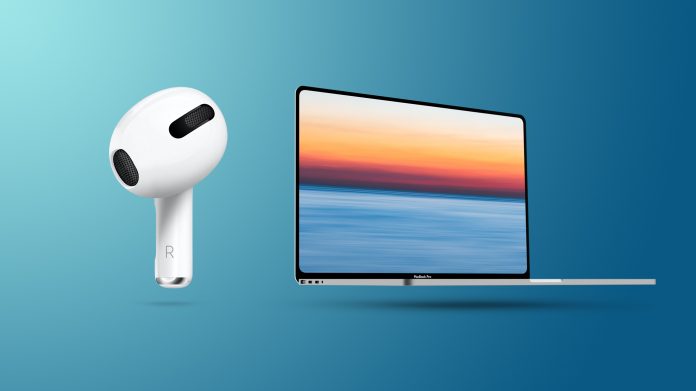 New MacBooks and AirPods are still on course for launch later this year, according to Taiwanese website Economic Daily News.

Apple suppliers are reportedly hurrying to increase capacity in preparation for the release of new MacBooks and ‌AirPods‌ in the second half of this year. Shipment momentum is expected to be “significantly stronger” from the third quarter of the year at the earliest, improving order fulfillment.

Shin Zu Shing supplies bearings to Apple for MacBooks, ‌AirPods‌ charging cases, and AirPods Max headbands, and is currently believed to be cooperating with Apple to supply bearings for new MacBook and ‌AirPods‌ products. The supplier is said to be struggling to meet demand and is in the process of hiring more manpower to expand production capacity.

While the report did not state which MacBooks and ‌AirPods‌ are expected to be released, it is highly likely that it refers to redesigned MacBook Pro models featuring Apple Silicon and third-generation ‌AirPods‌.

Similarly, Bloomberg and DigiTimes have claimed that third-generation ‌AirPods‌ will arrive later this year, following a spate of rumors about the new earbuds.

Both upgraded devices were rumored to launch earlier this year but have yet to emerge. Other reports have explained this confusion around Apple rescheduling mass-production from May to June to the second half of the year amid shortages and technical issues.

Economic Daily News indicated that there was a shortage of components not related to bearings and Apple ordered an “inventory adjustment” earlier this year, which may suggest that the launch date of updated MacBooks and ‌AirPods‌ was pushed back to later in 2021 by Apple due to shortages. Through the second half of the year, even if the bearing component itself is not subject to shortages, its shipment momentum may still be constrained by the supply of other components for the devices but will improve month by month, according to the report.

The new MacBooks are expected to push MacBook shipments to 23 million units this year for an annual increase of 15 percent. While ‌AirPods‌ shipments are expected to decrease around 25 to 30 percent in the first half of 2021, the launch of an updated model may boost annual sales by 10 to 15 percent in the second half of 2021.Related Roundups: AirPods, MacBook Pro 13″, MacBook Pro 16″Tag: udn.comBuyer’s Guide: AirPods (Don’t Buy), 13″ MacBook Pro (Don’t Buy), 16″ MacBook Pro (Don’t Buy)Related Forums: AirPods, MacBook Pro
This article, “New AirPods and MacBooks Due to Launch Later This Year” first appeared on MacRumors.com

Facebook
Twitter
Pinterest
WhatsApp
Previous articleApple Reportedly Storing Over 8 Million Terabytes of iCloud Data on Google Servers
Next articleDeals: Save Up to $129 On Certified Refurbished iPhone 12 Models at Woot
- Advertisment -