HomeNewsMicrosoft Windows 11 preview: 11 new features we are most excited for
News 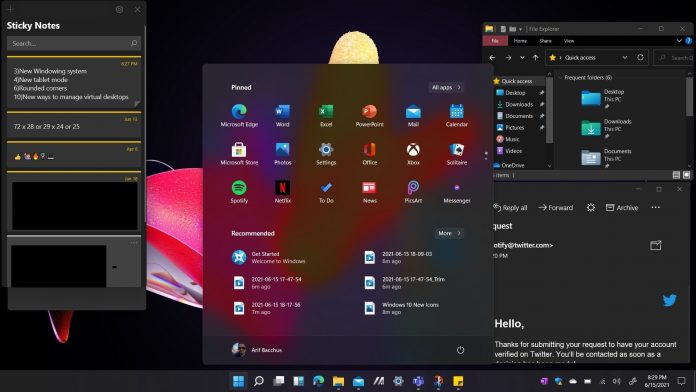 Microsoft’s worst-kept secret got out of the bag as a near-final version of the next-generation Windows 11 operating system update recently leaked online. Naturally, we took it as a chance to try things out ahead of what we are expecting to be an official reveal during the upcoming June 24 “what’s next for Windows event.”

After spending one day using what we’re calling the Windows 11 “preview” as our main operating system in place of Windows 10, there’s a lot that was worth the many months of hype and rumors. From a radical new Start Menu, new rounded corners, a fresh dark mode, and more, here are 11 things in Windows 11 that excite us.

The first thing that stood out to us in Windows 11 is the new Start Menu. Though controversial, this is one of the most exciting changes for us. The design ushers in a new era of Windows for Microsoft, and ushers Windows 10 into the past.

Instead of being off to the left as it has since Windows 95 (except in Windows 8,) Microsoft is now pushing the Start Menu to the center, though you can still move it to the left if you want. And, hey, it floats!

That alone is a big change, but the design is different too. Instead of featuring Live Tiles, and a long list of apps, the Windows 11 Start Menu shows you “pinned” apps and your most recent files. It makes getting to the things you want to use easy with minimal distraction, and it is quite refreshing.

Even the Taskbar is centered so that apps appear in the middle of your screen where your eyes naturally go. And that’s then paired with a new search icon, which brings up a floating search bar, rather than an off-centered box as it is in current versions of Windows. Again, this helps put the things that matter most to you front and center — a lot like MacOS or Chrome OS — and it is pretty neat.

Do you remember “aero” in Windows Vista and Windows 7? Windows had a glass-like effect behind them, and you were able to see a fancy visual as you tiled your apps and programs. This was present in Windows 10, too, but Microsoft had toned it down a bit so it is more subtle. Well, that’s back in Windows 11, and it never looked so beautiful.

Now, there are a ton of different animations throughout Windows 11. Moving Windows around your screen for multitasking shows a glasslike blurred effect in front of your wallpaper. And touching the top of a window with your finger shows a new window outline, helping you understand where it is going to go.

But that’s not all. Opening and closing apps, maximizing and minimizing windows — they all have new animations. Apps now minimize as they jump to the Taskbar. They also have an effect where they open from the inside if you click the maximize button. It is a new feel for the aging Windows.

A new way to multitask with windows

One of the most common things people use in Windows is split-screen apps. In Windows 11, Microsoft appears to have added a “groups” feature. If you hover over the maximize button, you’ll see six ways you can pair up your active windows with all other open windows. You can then click the button and create a group, and Windows 11 will remember the combination.

This is quite cool. This feature was actually a part of Fancy Zones, which is a part of Power Toys. The software is made by Microsoft and lets you tile windows to custom layouts. It looks as though Microsoft has finally worked that software into Windows without the need for an extra download. And it’s really intuitive to use with no learning curve required.

A big problem with Windows 10 was the way it handled touch. Compared to Chrome OS, iPad OS, and other operating systems, it lagged behind due to a clunky interface. Well, Windows 11 brings some much-needed changes by removing tablet mode entirely in favor of some smaller tweaks.

When Windows 10 was introduced in 2015, the sounds did not change much. We’ve been stuck with the same audio feedback for common tasks like inserting USB drives, error messages, notifications, and more. Windows 11 finally changes things up with a new suite of sounds. The sounds cover a lot of frequent tasks, and it’s really refreshing after sitting through five years of the same system noises. We demoed the sounds for you above.

Dark Mode was where Windows 10 always suffered. Switching to dark mode might not always change the way some system apps and settings pages look. Well, in Windows 11, Microsoft has tried to tweak that. There are still some areas that aren’t fully compatible with dark mode, but the way it looks on title bars, the taskbar, and Action Center is really rejuvenating to the eyes.

Windows 10 had a lot of flat edges, but that is changing in Windows 11. To line up with Microsoft’s Fluent Design language, Windows 11 swaps out the pointed corners for rounded ones. It’s one of the most noticeable things in the operating system, and it also looks amazing. The edges of windows and apps now look a bit like what Apple did in MacOS Big Sur. It is a lot softer on the eyes when paired with the right wallpaper, and a big change after five years of squared corners in Windows 10.

Microsoft has added some consistency to the overall under interface. You’ll see that Action Center now also has rounded corners, and bigger slider buttons, helping make button presses a lot easier. The way buttons are shaped in Action Center fit naturally with the tips of your fingers. It’s a stimulative refresh that makes you want to touch your screen.

Windows 10 struggled with icons, as many were left over from Windows 8, Windows Vista, and even Windows 98. Microsoft has been pushing new icons across its entire range of products, and now Windows 11 is up to speed on that change, too. The release brings new icons for documents, downloads, and pictures. As you navigate your way through the OS, you’ll see fresher icons, all of which help push Windows past the year 2015.

Virtual desktops are also seeing an exciting change in Windows 11. Now, the management of virtual desktops moves into a dedicated area at the bottom of the screen. You can even individually change the wallpaper on each virtual desktop, and slide them left and right with your mouse and finger. It is a more natural and cohesive way of dealing with things.

Last on our list is widgets. These are making a return from Windows Vista, and it could not be more timely. You can summon widgets with the click of a button in the taskbar, and you’ll get thrown into a new UI that features the time,and “tiles” with specific information. As Microsoft intended with News and Interests in Windows 10, these widgets make getting information at a quick glance quite easy. There’s no need to pull up your phone for tasks like checking the news, the weather, or traffic. It’s all at your fingertips now.

It is important to note that the Windows 11 build we’re going hands-on with isn’t yet final. Things could change between now and the eventual release, but it sure does look as though many of these features will end up in the final operating system. June 24 will reveal the true scope of what’s to come in Windows 11, and we could not be more excited.

Facebook
Twitter
Pinterest
WhatsApp
Previous articleIntel will feature DDR5 and PCIe 5.0 first, but AMD won’t be far behind
Next articlemacOS Monterey Brings Apple Fitness+ to the Mac With AirPlay
- Advertisment -