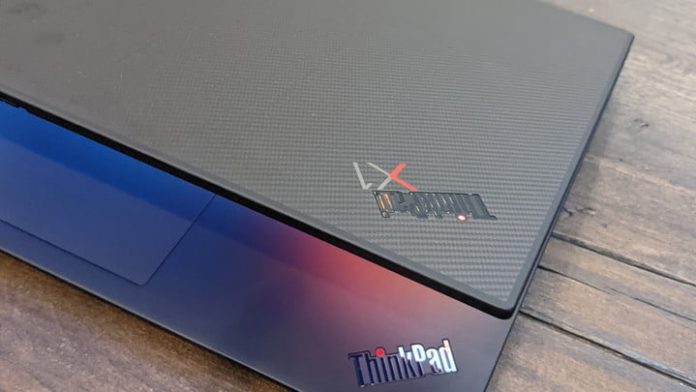 A week after upgrading its enterprise-focused P-series lineup, Lenovo is announcing some updates for the mainstream ThinkPad series of products. These laptops are more catered to prosumers and content creators, with new features focused on improving the connectivity, power, and speed of the systems.

The highlight of the bunch is the ThinkPad X1 Extreme Gen 4, which is getting a 1080p webcam and options for Nvidia RTX 30-series graphics. That’s joined by the ThinkPad L13 Gen 2 and L13 Yoga Gen 2, which now feature AMD’s Ryzen 5000 Series mobile processors under the hood.

Starting at $2,150 and coming in August, there are a couple of notable changes to the ThinkPad X1 Extreme other than what’s inside powering the system. Lenovo has actually improved the carbon fiber top on the lid so there is a bit more “pop” that exposes the waves on thge carbon fiber texture at a 37-degree angle. This is similar to the woven interior of the XPS 13.

Lenovo is opting for a 16-inch 16:10 aspect ratio display, which is larger than previous generations. This allows for more room to fit things on the screen. Display options will include up to 600 nits of brightness with 4K resolution and also support for touch and pen. The display is then topped by a full-HD webcam, a change from the 720p webcams seen on other laptops. It even has a shutter you can physically open and close.

Heading to the side of the system,  you’ll find that the power button and trackpad have changed. It now houses a fingerprint reader, yet at the same time, the trackpad has increased in size for those who don’t prefer Lenovo’s TrackPoint nub.

But the bigger changes include the ability to configure the ThinkPad X1 Extreme Gen 4 to up to Nvidia GeForce 3050 Ti or RTX 3060, 3070, or 3080 GPUs. Lenovo says it engineered a hybrid cooling system using heat pipes, as well as a vapor chamber, to optimize for the graphics. It also added keyboard intake vents and a dual bypass design to keep things at an optimum temperature.

The X1 Extreme Gen 4 can be configured with up to 64GB DDR4 memory, two 2TB M.2 PCIe Gen 4 SSDs, and a standard 90-watt-hour battery for up to 10.7 hours of battery life. As for the Intel chips inside, they’ve been upgraded to include up to 11th-generation Core i9 H-series processors.

RAM can be pushed up to 64GB, though there is a 16GB limit on models with RTX graphics.

As for the ThinkPad L12 Gen 2 and L13 Yoga Gen 2, these laptops will be coming in August, priced at $799 and $999, respectively. There’s not much new in terms of the design of these laptops, as changes are mostly under the hood in the form of AMD Ryzen 5000 series processors. They are the first of Lenovo’s convertibles to be powered by AMD’s new Ryzen chips and promise to deliver performance gains and battery life improvements when compared to Intel’s 11th-gen counterparts.

Of course, the Yoga Gen 2 is a convertible, so it has an optional Yoga Pen and touch capability. Battery life on that unit is promised at 10.6 hours, whereas the L13 gets 10.8 hours.

Lenovo also announced the new ThinkVision T24m-20 monitor and the ThinkVision MC50 Monitor Webcam to pair up with these new laptops.