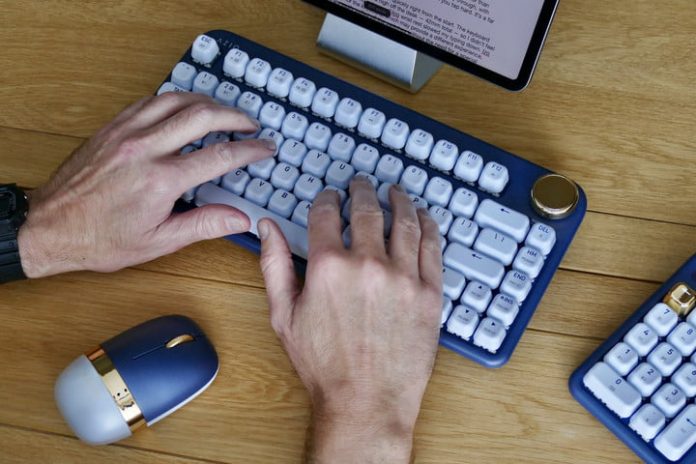 Does the Keychron K3, our current Bluetooth mechanical keyboard recommendation for use with the iPad, have some new competition? I’m typing this out on the new Azio Izo Wireless Mechanical Keyboard, a Bluetooth mechanical keyboard that looks like it belongs in places other than an office thanks to its introduction of some much-needed flair to the humble keyboard. But does that mean it’s all about style rather than typing prowess?

Apple’s Magic Keyboard is superb but it’s also very expensive, and if you want to enjoy typing on the iPad but not to spend $300 or more doing so, a good Bluetooth mechanical keyboard is a great alternative.

How much cheaper than a Magic Keyboard? The Azio Izo keyboard is $70, or $146 if you choose the whole kit, which includes a mouse and a number pad, all in a matching color scheme, to go along with it. I’ve been typing away with the keyboard for about a week, connected to either my iPad Pro (2020) using Bluetooth or my Mac Mini M1 with a USB cable.

What strikes you first is the design. Azio has ignored the memo most other mechanical keyboard companies seem to have received, which states keyboards can’t come in anything other than gray or black. You’re looking at the Blue Iris version in our photos, but there are also White Blossom and Baroque Rose version,s both with gold accents. They’re very attractive, and totally different from the Keychron in terms of style and design.

The Izo keyboard uses Gateron Blue switches hidden under large keycaps that have a smooth indentation to make them easy to locate and comfortable to press. The switches aren’t particularly loud, and are definitely quieter than the KeyChron K2v2, and about the same as the Keychron K3. Clicky rather than clacky, the sound is quite subtle. It’ll still command some attention if you tap away in a quiet cafe or library, though.

I’ve been impressed by the precision, and have typed quickly right from the start. The keyboard has a large, steady base and the typing surface is raised high off the desk — 42mm total — so I didn’t feel the need for a wrist rest. If anything, I found using my Filco wrist rest slowed my typing down. Azio also makes a companion wrist rest for the keyboard that may provide a different experience, but I haven’t tried it. The keycaps are easily pulled off the switches without the need for a special tool, and specific Windows/Mac keys are included in the box, along with white alternatives for the gold space bar and escape key.

You’re stuck with the gold control knob, though. When connected to the iPad, this works the volume control, requires no setting up, and is used to cycle through the backlight effects on the keyboard when used with the Function key. It has a pleasant feel when it’s rotated, but the gold is a little ostentatious for my liking. Inside the keyboard is a 5,000mAh battery that I haven’t needed to charge outside of a few hours connected by USB to my Mac. Aizo claims if you don’t use the backlight, the battery is good for a year on a single charge. 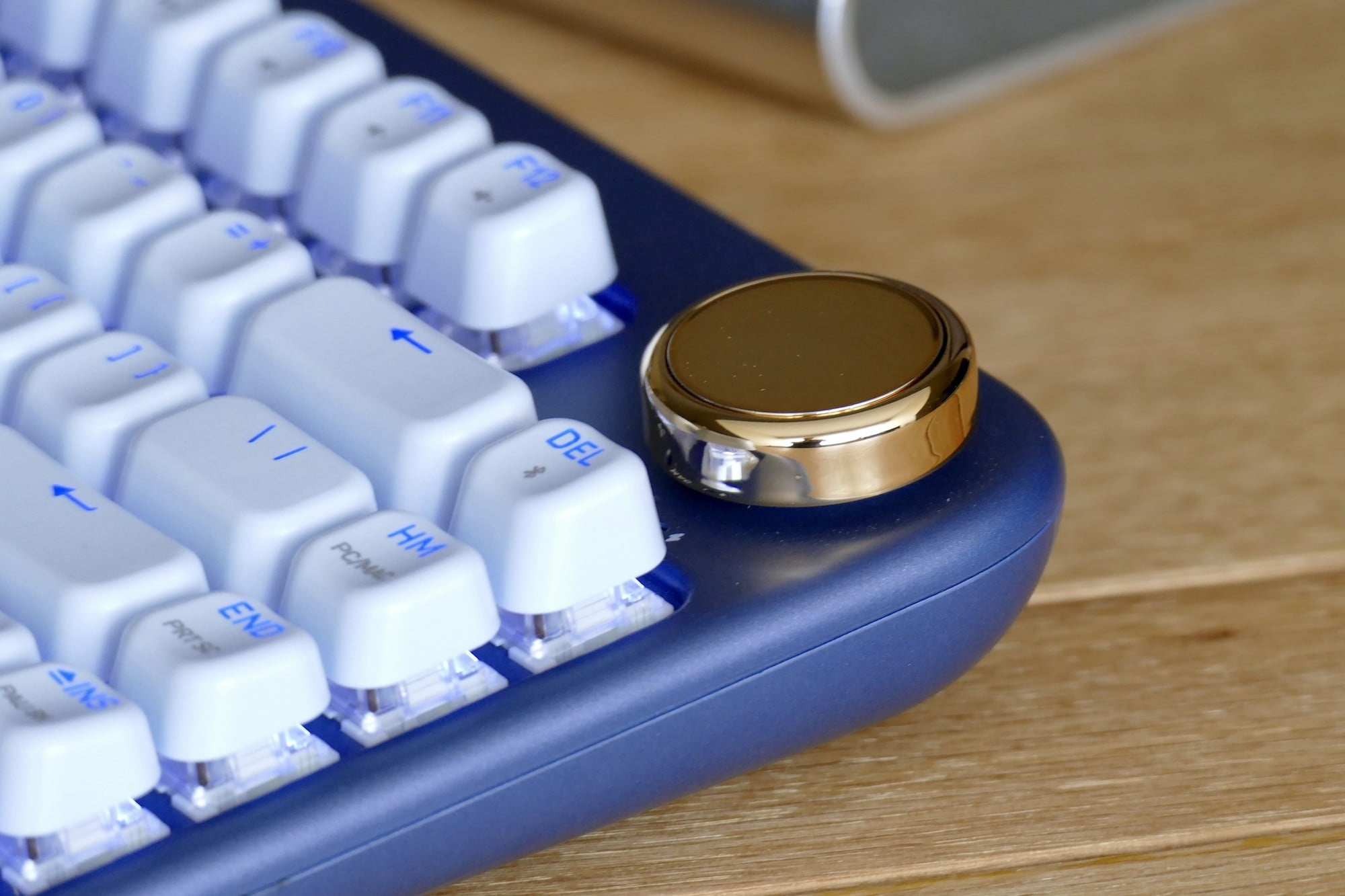 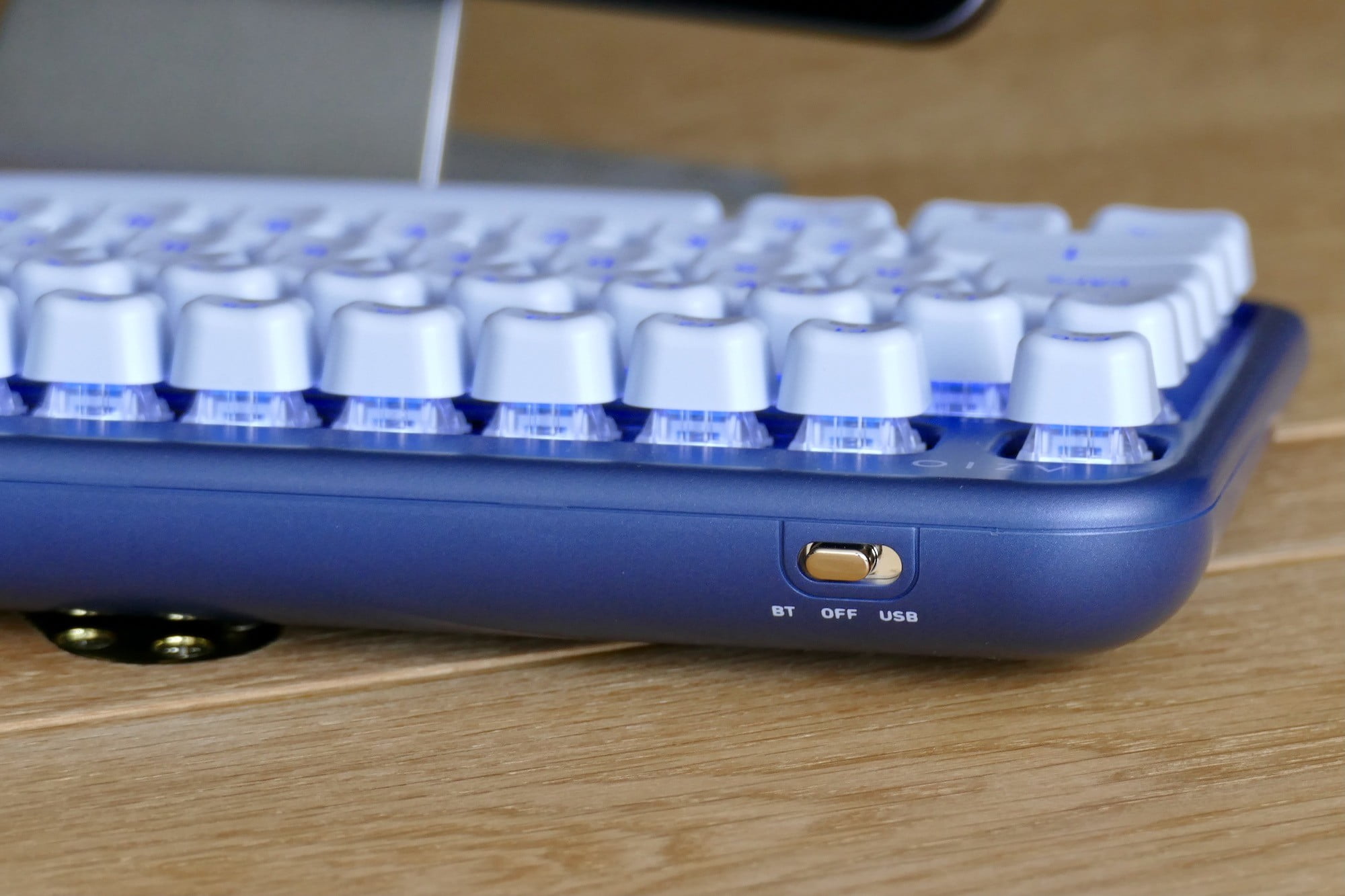 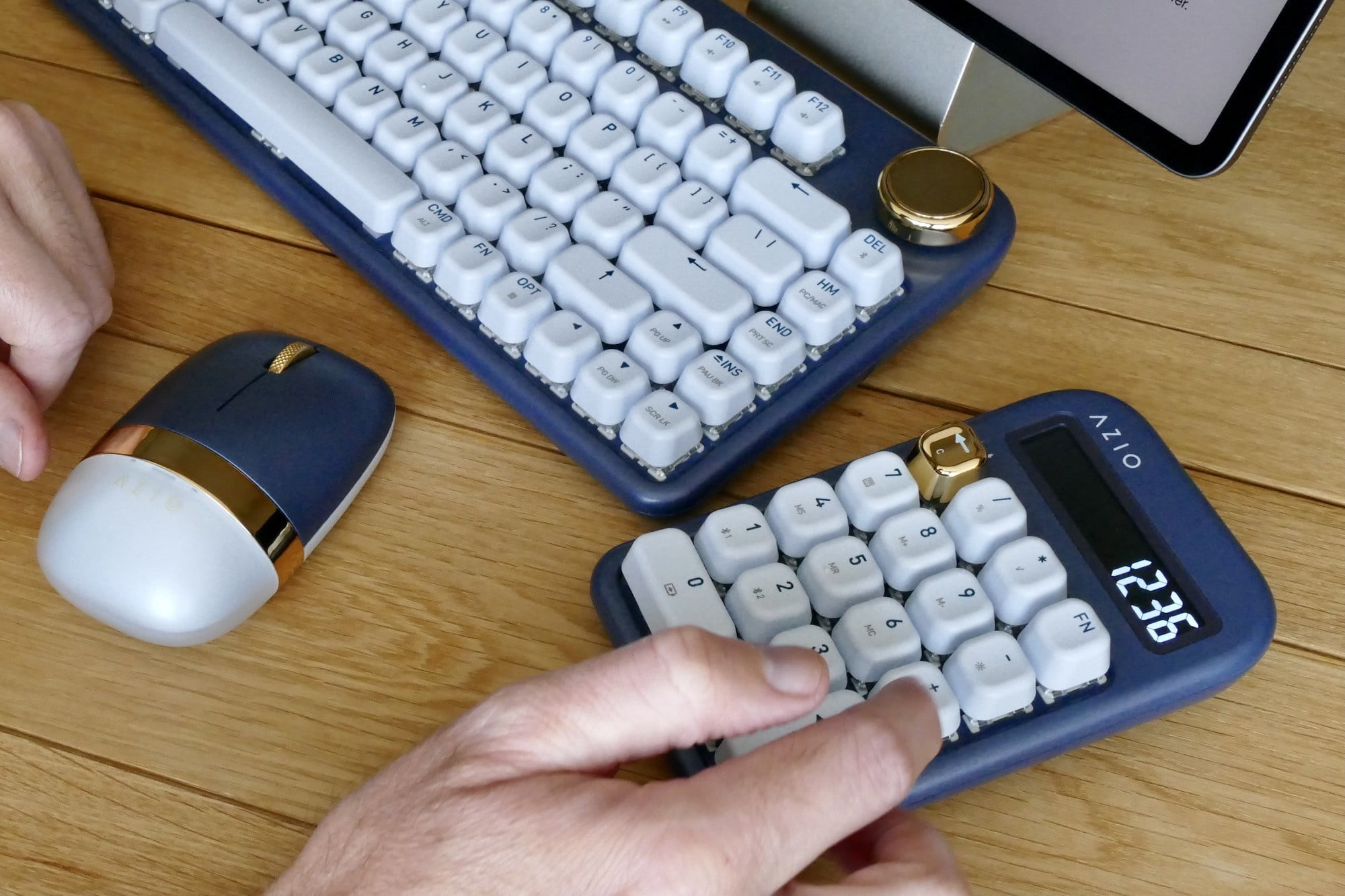 Annoyances? The keyboard is switchable between Mac and PC, but it doesn’t remember the setting after you turn the computer off, when it reverts back to PC. The Bluetooth connection doesn’t “know” it’s connected to an iOS device either, so you have to switch it to the Mac layout, which introduces the same problem. Like Apple’s Magic Keyboard, it’s also too easy to switch between typing languages by accidentally hitting the Caps Lock button when typing.

How about the hardware? The keyboard case and keys are made from plastic, with the keys featuring laser-etched letters and numbers, which will apparently never wear away from use. While some will love the gold accents, I think they look cheap, particularly on the mouse. Not everyone will like the plastic case either, and it definitely doesn’t feel as expensive as the aluminum on the Keychron, or as plush as the Apple Magic Keyboard.

The keyboard’s backlight is clear and bright, and there are 21 different modes to chose from, however, it’s a single-color array, meaning you get a cool blue illumination and no rainbow option. The entire keyboard is quite heavy at 793 grams, and the overall dimensions make it less suitable for traveling than the Keychron K3, just because it takes up quite a lot of space in a laptop bag.

The mouse is very cute. It’s palm-sized, with a well-judged ergonomic shape that should suit most hand sizes. When connected to the iPad, it operates faultlessly, guiding the cursor across the screen, where it performs most of the functions you’d normally select with your finger. It’s all very natural, and doing things like highlighting and moving text isn’t as haphazard as it can be with your finger. The wheel is a little slow to scroll through menus, but it does have a third button — and you can assign it a function in the iPad’s Settings. There’s also a full size USB receiver hidden under the mouse, so you can connect it to a computer that doesn’t have Bluetooth if you prefer.

The number pad matches the style of the keyboard perfectly, complete with a gold backspace key, and it even has its own screen so it can be used as a stand-alone calculator. It’s a feature few other mechanical keyboards offer, and its versatility makes it interesting, as does its complete portability. If you don’t need to use it, it doesn’t have to take up room on your desk or in your bag.

Put the Izo keyboard, mouse, and number pad alongside each other and it’s a great look. The summery colors separate them from other far more boring, businesslike pieces of office equipment, and they will absolutely brighten up your desk. All three Izo products connect to the iPad using Bluetooth and can all be used at the same time, but it’s frustrating that the Bluetooth pairing setting isn’t uniform or even very logical. I had to get the instruction booklet out for both the keyboard and number pad to figure out how to put them into pairing mode. I didn’t have to do it more than once, but I probably won’t remember how to do it if I want to pair any of them with another device in the future.

Where to get the Izo Collection

Azio will first sell the Izo Collection hardware through Indiegogo, just as it has done for some of its previous models. In August, the keyboard and accessories will go on general release. Buy through the Indiegogo campaign’s cheapest tier and the keyboard costs $70. If you want the set seen in our photos with the mouse and the number pad, plus the palm rest and a mouse pad, you’ll need to spend $146.

Miss out and the general retail prices are higher. The keyboard will cost $130, the mouse $50, the number pad $60, and the mouse pad and palm rest $20 each. If you’re interested, it’ll really be worth getting in early on the Indiegogo deal.

Worth it for your iPad?

The Izo keyboard works very well with the iPad, providing a fast, precise, and pleasingly tactile typing experience, complete with all the iOS functionality required. The mouse is similarly useful, and the versatile number pad adds value as an accessory few other keyboards offer.

However, the Izo Collection is best suited for use at home, rather than being carried around. It’s bigger and heavier than the Keychron K3 and Apple’s Magic Keyboard case, and therefore doesn’t become our mechanical keyboard recommendation for Apple’s tablet. That doesn’t stop it being a great purchase if you’d like a mechanical keyboard with some design flair for use at home.