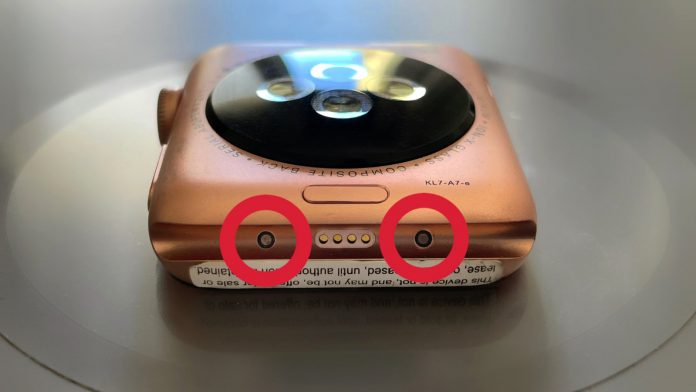 Apple may have tested “Smart Bands” for the Apple Watch, according to a new image of a prototype device.

The image, shared by developer and prototype collector Giulio Zompetti, shows two metal contacts inside an Apple Watch Series 3 prototype’s band slot, either side of the diagnostic port. Zompetti postulated that the “two unusual pads are exposed to the band,” and may be a kind of iPad-like “Smart Connector,” much like those from various iPad models, used to accommodate a “Smart Band.”

Apple has filed a large number of patents around smart Apple Watch bands, indicating that it is something that the company has actively considered. Some patents showed how features such as biometric authentication, self-tightening, and LED progress indicators could be integrated into a band, while others explained a modular approach with batteries, displays, cameras, blood pressure sensors, and more.

The Apple Watch’s hidden diagnostic port was once speculated to facilitate Smart Bands. At the time, the diagnostic connector, which is purportedly based on the design of the Lightning connector, was said to be capable of supporting future accessories.