HomeNewsAMD’s Ryzen 8000 APUs may borrow a key feature from Intel and...
News 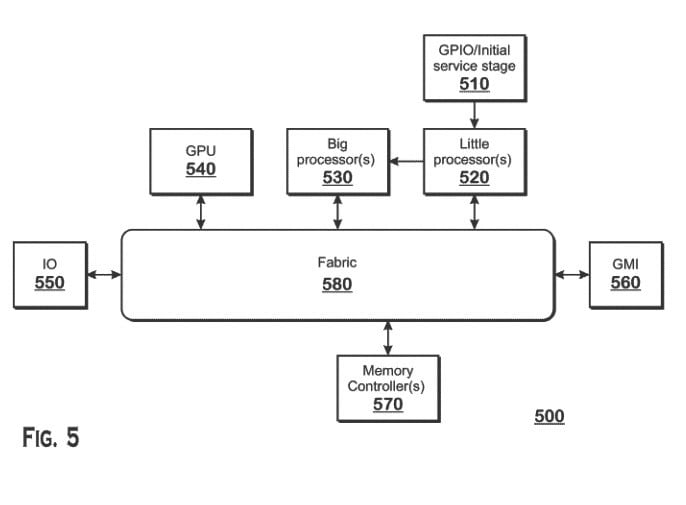 A new patent reveals that AMD could have a core redesign in the works for its upcoming processors. The patent, which was filed in 2019 but published only a few days ago, shows that AMD is working on a big/little core design that could show up in its upcoming CPUs and APUs.

The patent was discovered by @Kepler_L2 on Twitter, and it details how AMD’s processors could move tasks between big, high-performance cores and little, high-efficiency cores. Arm started using this design in 2013, and since then, it has shown up in Apple’s M1 chip and countless mobile processors. Intel is also using this design for its upcoming Alder Lake processors.

Like most patents, this one doesn’t specify any particular product that AMD will use the design in. Rather, the patent is focused on the method of relocating tasks from a big core to a little one “by comparing performance metrics to associated thresholds.”

The same works in reverse. The patent details that the big cores will move tasks back to the little cores after falling below a utilization threshold or when the cores are idle. Additionally, tasks will move from the big cores to the littles ones whenever the duration of time a single core is used falls below a certain threshold.

That last trigger illustrates the purpose of a big/little CPU design. The big, high-performance cores handle intensive tasks that stress a single core, while the little, high-efficiency cores can handle light tasks that require multiple threads. By distributing heavily threaded tasks to high-efficiency cores, the processor is able to keep up with the workload while consuming less power.

AMD’s design works by putting the first set of cores — big or little — into an idle state before switching the task to the other cores. After they’re stalled, the processor will save the architecture state in a memory location before copying it to a separate memory location for the other set of cores. Then, the second set of cores will drop whatever tasks they’re handling via an interrupt service routine to restore the architecture state and resume the task.

Companies like AMD file dozens of patents each year, and a good chunk of them never go anywhere. However, given that Intel and Apple are both pressing on with the big/little design, it only makes sense for AMD to jump on board.

Although AMD hasn’t confirmed anything, multiple leaks have shown that upcoming Ryzen 7000 processors will not use this design. Instead, they’ll be based on Zen 4 cores alone. We may not see the hybrid model on desktop AMD processors for a few years.

We could see them on APUs, though. The patent says the system will work when transferring tasks between different processing units, like a CPU and a GPU. A leaked road map from earlier this month shows where AMD could use this design. The upcoming Ryzen 8000 APUs, code-named Strix Point, will reportedly use Zen 5 and “Zen 4D” cores. The Zen 4D cores will likely use AMD’s recently announced 3D stacking technology.

Although it looks like AMD has some sort of big/little design in the works, it won’t come to market for some time. Leaks have confirmed the company’s road map throughout 2022, so we may not see hybrid AMD processors come to fruition until 2023 or later.