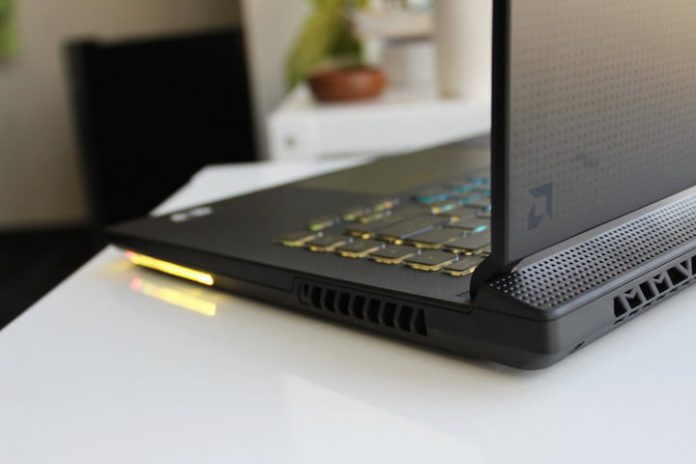 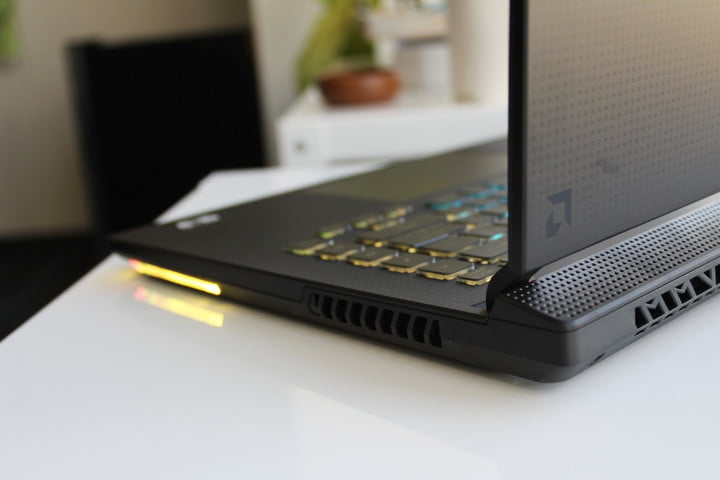 AMD is the only chip company that can power both the CPU and discrete GPU in a gaming laptop, and it’s finally starting to take advantage of that fact.

The company announced three new Radeon mobile GPUs, the RX 6800M, 6700M, and 6600M, as well as the ways these cards work in tandem with AMD processors.

How do they stack up? Well, I checked out the Asus ROG Strix G15, which came with both the RX 6800M and the Ryzen 9 5900HX. Is the AMD Advantage real, or is Nvidia still the king of gaming laptops?

These new graphics cards are based on RDNA 2, which is AMD’s second-generation graphics architecture. This is the same architecture that supported the excellent RX 6000-series desktop graphics, and now that same highly efficient performance is coming to gaming laptops for the first time.

This sticks pretty closely to what Nvidia has done with its RTX 30-series lineup, though Nvidia has more cards in the stack to fill in the gaps, such as the RTX 3060 Ti.

The Asus ROG Strix G15 is among the first laptops to use these RX 6000-series graphics cards. It is a midrange gaming laptop with a focus on esports and high frame rates. The laptop has always been inspired by racing and sports, and the look is far from subtle. There are splashes of red, interesting design flourishes around the hinge and on the lid, and textured surfaces throughout.

It also features an oversized back end, where some of the ports and large vents are located. Of course, the laptop’s most noticeable design feature is the strip of light under the chassis that splashes RGB across your desk. It’s handy, though it makes the footprint of the laptop much larger.

The ROG Strix G15 also features a 1080p screen with a 300Hz refresh rate and a 3 millisecond response time. AMD says there will be options for 1440ps screens as well.

Of course, the ROG Strix G15 isn’t the only laptop to support AMD’s new graphics cards. The HP Omen 16 is another example AMD has pointed to that uses AMD on both CPU and GPU.

While AMD supports configurations that employ its own graphics with Intel processors, it’s not a combination we’ve seen happen very often. So far, it appears that many of the AMD laptops that will implement these new graphics cards will be paired with AMD processors.

There’s much more that can be said about the Asus ROG Strix G15, but it’s beyond the scope of this review. Let’s focus on the performance, which is where the Radeon RX 6800M comes into play.

In the past, the ROG Strix G15 has been configurable with up to an Nvidia RTX 2070, which was the second most powerful graphics card in Nvidia’s lineup at the time. The last time I reviewed the laptop, though, it came with a weaker Nvidia GTX 1650 Ti.

So, where does AMD’s selection of graphics cards fit into the stack? Well, my review unit came with the Radeon RX 6800M, which is the most powerful mobile graphics card in AMD’s stack.

According to AMD’s own slides, it’s supposed to compete with the RTX 3080 for the title of the most powerful laptop graphics you can buy. AMD shows it slightly beating the RTX 3080 in games like Assassin’s Creed Valhalla and Resident Evil: Village.

The results from my testing, though, haven’t been so clear-cut.

I’ll start with the good news. The RX 6800M in the ROG Strix G15 benchmarks quite strongly in 3DMark. In both Time Spy and Fire Strike, the RX 6800M beats out the RTX 3080 by as much as 13%, tested here against the MSI GS66 Stealth. It’s also a significant leap over the RX 5000-series. While I was never able to benchmark the 5800M, there appears to be a staggering difference between generations in terms of performance.

When I started testing game performance, though, results were less conclusive. The Radeon RX 6800M excelled in some titles, such as Assassin’s Creed Valhalla, beating out the RTX 3080. 77 fps at max settings is among the best frame rates I’ve tested on a gaming laptop in that heavy benchmark. Meanwhile, it just about matched the RTX 3080 in Civilization VI at 150 fps — again, at max settings.

Performance was less impressive on the lighter, esports titles and first-person shooters I tested. The Strix G15 was far behind the MSI GS66 Stealth in both Battlefield V and Fortnite, both games that benefit strongly from higher frame rates. AMD was unable to verify that these frame rates matched its expectations for performance.

However, I got the feeling the mixed bag of results was a fault of the implementation, not necessarily the raw strength of the graphics card. I toggled between the default “Performance” and “Turbo” modes in the Armoury Crate Asus software, which allows you to set different performance profiles. Sometimes, switching to Turbo made a world of difference and sometimes it did nothing at all. On average, Turbo got the fans spinning up to 5200 revolutions per minute, whereas Performance mode hovered around 4500rpm.

Take Cyberpunk 2077, for example. My first time bringing up the game, it was barely playable, eking out just 22 fps in High settings. And this is without ray tracing, mind you. I tried changing the settings in Armoury Crate to Turbo, which made the frame rate jump up to 79 fps, which is closer to what AMD quotes in its own testing. But after restarting the game, those numbers all changed, pushing the standard performance mode frame rates up to 67 fps. It left me scratching my head; clearly, not all the kinks have been worked out.

Regardless, a heavy game like Cyberpunk 2077 that utilizes both DLSS and ray tracing is never going to perform on AMD hardware as it does with Nvidia. There’s no getting around that.

Aside from some of the inconsistencies, the ROG Strix G15 kept temperatures in check. It can get loud, but the GPU temperature never rose above 80 degrees Celsius. Exhausting hot air from every possible spot, the surface temperatures were never uncomfortable either. Then again, the ROG Strix G15 is a large, chunky gaming laptop, especially compared to many of the thinner and lighter laptops on the market.

Ultimately, it’s hard to argue with a 3DMark Time Spy that high. Clearly, AMD has delivered an RTX 3080-caliber gaming GPU, even if there’s work to be done on this particular system. With some inevitable tweaking, I wouldn’t be surprised if some of these wrinkles weren’t ironed out in the coming weeks — and that’s assuming there wasn’t some kind of problem with only my unit. After many days of back-and-forth with AMD, though, we weren’t able to come to a determination about that.

If AMD can fix it, the extreme value of a laptop like the Asus ROG Strix G15 is going to make it an easy buy. This configuration has the Ryzen 9 5900HX, Radeon RX 6800M, 16GB of RAM, 512GB SSD, and a 1080p 300Hz screen — all just for $1,650, sold exclusively through Best Buy. It’s not the sleekest gaming laptop in the world, but that’s quite the bargain. It’s the same kind of excellent value that made the Dell G5 SE such a highly recommended laptop.

Don’t think I’m cutting AMD a break here, though. Getting consistent performance out of its products is key, and if it can’t iron out its partnership with laptop manufacturers, its powerful graphics cards are worthless. That’s especially true when AMD is promoting its advantage as a tight interlinking of components within the system.

AMD doesn’t own the whole system — and if it wants its graphics cards to expand beyond the very small selection that currently exists, it has its work cut out for it. If it can do that by the time these laptops start shipping to customers, it just may have a winner on its hands.

Facebook
Twitter
Pinterest
WhatsApp
Previous articleMotorola may soon launch a 5G variant of the Moto G Stylus (2021)
Next articleNvidia is renting out its A.I. Superpod platform for $90K a month
- Advertisment -